Speak up or be silenced by your own roof

Facebook is lit up this morning with furious anger at yesterday’s killing of a woman whose house collapsed over her head while a construction development next door dug too deep too close.

There’s anger at the fact that a pattern has been emerging and these incidents are occurring with increasing frequency and increasing severity. There is anger that last July, Minister Ian Borg all pomp and circumstance announced a “reform in the construction industry that would give peace of mind to those who live next to construction sites”.

There is anger that we are supposed to be safe under a regime designed by the brightest mind in the country, the one and only architect-lawyer or lawyer-architect Prince Robert Musumeci, first of his name. And hopefully last.

There is anger that journalists cover these stories with solemnity and rather a lot of enthusiasm but drop them the moment the next thing happens. I’ve seen a few references to the expected obligatory dirge on Xarabank until the page turns with the comic skit after the advert break.

There is anger at regulators, at architects, at developers and at politicians.

There is anger that a protest has been called for tonight because ‘politics has nothing to do with this’.

It is safe to say no one is indifferent to what happened. 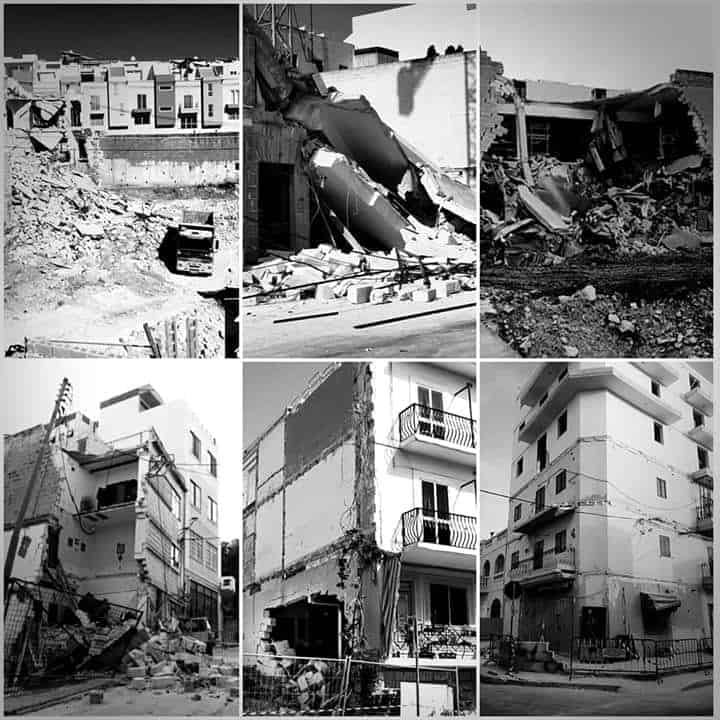 Most of the frustration comes from the fact that it does not seem too difficult to properly address the causes of these incidents.

Clearly we know that a little tinkering with the rules and a legal notice in the gazette is not the way to solve this issue. Nor is relying on a compromised in-the-pockets-of-those-who-pay-them snake-oil salesmen like Robert Musumeci going to give us the hard and serious decisions that need taking.

We understand that relying on the developers themselves to supervise and certify their own work is insane even if the developer is a chartered architect. It is clear to one and all that enforcement cannot be outsourced to the enforced upon. It’s like asking bank robbers to fill out their own income tax returns and declare the loot. I’m sorry. I know architects are not generally bank robbers. But their direct involvement in projects they are relied upon to certify is no longer acceptable.

We understand therefore that supervision and enforcement are state functions that developers must pay for. This is not a ‘government induced cost’ as a libertarian might describe them. This is the price that is fairly charged to fund the state’s obligation to protect the lives of those who are not building a complex of apartments but merely living in their home next door to one.

We understand therefore that architects certifying works should be agents of the state, a bit like notaries, rising about the interests of those who pay their fees particularly if they’re paying themselves as shareholders of the development.

We understand that cutting corners with the studies needed before major projects are undertaken, literally undercuts buildings. With people inside them. I cannot understand for the life of me how any lawyer-architect or architect-lawyer can justify abolishing geological studies before major excavations are permitted. Perhaps we need to fund another first degree, in geology this time, for the architect-lawyer.

We understand that responsibilities for developers cannot stop at the gate of the building site. They need to be responsible to safeguard the lives and safety of their staff on site. But no one seems to be responsible for the people living in fear and dust and noise and tremors in the little house next door.

And we understand that the people who take the decisions understand all this but are unwilling or unable to act. They speak of construction as the ‘motor of the economy’. Except that we still spend money to make motors safe. If we didn’t we’d still be driving Model T’s and hydrogen zeppelins like maniacs. They speak of development as the ‘goose that lays golden eggs’. Except we cannot eat gold. And if our own house falls on our heads we cannot eat any sort of eggs anyway.

The only way they are going to do something about living up to their obligation of protecting our lives is if we protest. This is far from useless. It is actually the only way they’ll listen.

Repubblika called a silent protest for 7pm this evening on site.

Previous:Ali Sadr to face trial from today
Next:“The Gang with a Logo”