Italy yesterday marked the anniversary of the declaration of the overthrow of the fascist regime. It should be a day celebrated here as well. It was a battle our ancestors fought as well. They helped win it. Our failure to remember is why we’re not seeing the signs of its resurgence.

My article in The Sunday Times today is about Robert Abela flexing his muscles as a strong man in just his 100th day in office. This goes beyond the residual narcissism of a man who spent his youth admiring his own reflection. There are some chilling traits that are emerging surprisingly quickly.

Consider Robert Abela’s fascination with uniforms, synchronised displays and a slavish, unhinged adulation of the military. Mark Anthony Falzon put it extremely well in his piece of this morning. Hearing all the jingoistic bombast you’d think Covid-19 is a reincarnation of the Ottomans and we have once again become the frontier of what we consider to be civilisation holding up against the marauding hordes. 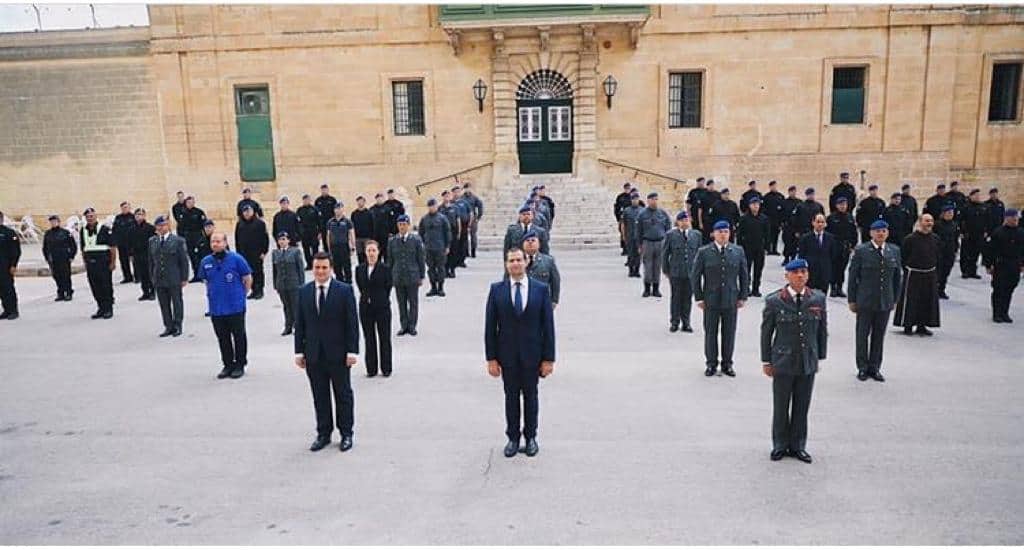 Consider Robert Abela’s visit to the prisons yesterday. Look at this home-made display of Nuremberg organised for him in what should be a civilian prison. In democracies civilian prisons are not run by police officers, let alone this pathetic parade of over-grown boy scouts. The prime minister said the prison should set the example of national discipline. Excuse me? Is that the standard now? We all have to march to the delusional swashbuckling of an unhinged retired soldier who has been given a small toehold of territory and made lawgiver and dread lord?

Then there’s all the chest beating about the poor soldiers who can do no wrong. Of all people even the very reluctant Raphael Vassallo saw through the insufferable haughtiness of Jeffrey Curmi this morning and pointed out that were it not for Repubblika filing a police report no one would have gone out of bed to check why 12 people died over the Easter weekend.

The point is not Raphael Vassallo finding it in himself to approve of anything Repubblika has done. That really does not matter now. The point is that when a country has come to a point that the army feels no one is entitled to ask it what it could have done differently to avoid 12 people dying, things have taken an ugly turn.

That’s two characteristics of fascism then that we can see.

One is the glorification of the military for no reason which would otherwise be ordinary. The army has been patrolling our waters for many years. Soldiers have been recognised for their commendable acts of individual bravery for many years. Deservedly so. But proportionate and deserved admiration is becoming a silly act of hero-worship, an idealisation of a non-existent uniformed and visored hero that can do no wrong. That’s as dangerous for soldiers themselves as it is for our democracy.

The other, implied, characteristic of fascism is one that Robert Abela has developed on the great work of his predecessor. The clean equation between dissent and treason. The identification of opposition to government authority with hatred of country. The isolation of enemies of the people who are no worse than enemies of conformity and state-enforced uniformity.

The recollection of the 1920s and 30s is chilling. Support is whipped up with frenzied demagoguery. Robert Abela does not put on a great show on stage as a solo performer. But the prostitution of the national flag as a prop to a politics of exclusion is being deployed by him as a tool of great effect. And he can set the scene to compensate for his slow thinking and unconvincing repartee. It’s a bit like hiding a stool behind a lectern to make up for a hopelessly short speaker.

Robert Abela goes on the Labour Party TV station to answer questions to journalists as intent on squeezing a bead of sweat out of him as third-generation card carrying communist party members on an internship at Pravda. With the right steroids and the correct shade of oil he can look the right Übermensch. That too is a symptom of fascism. As much as divesting of any legitimacy any rendition of the facts that does not fit in the narrative created by the regime.

Fascism is not an elitist political program. It is a popular and populist one. It relies and thrives on public support, the more frenzied and committed the better. It weaponises fear, identifies scapegoats, organises public displays of focused and concentrated hatred against undesirables: those are the obviously negative efforts of its campaigns. The positives efforts are focused on creating new gods, fed by new bonds of loyalty forged on an invented, glorious past, transforming paranoia into anger, fear into retribution, disagreement into choruses of support, and the slander of democratic chaos and weakness into national strength buffed up by jackboots and ceremonial swords.

Where do you want to be as fascism lifts its head again?

The day of liberation is not just about the overthrow of fascism. It’s about the partisans who resisted it. Few in numbers. Killed many times over with mockery and isolation. Ultimately killed at the pointy end of a bayonet. Ultimately victorious. For a while.