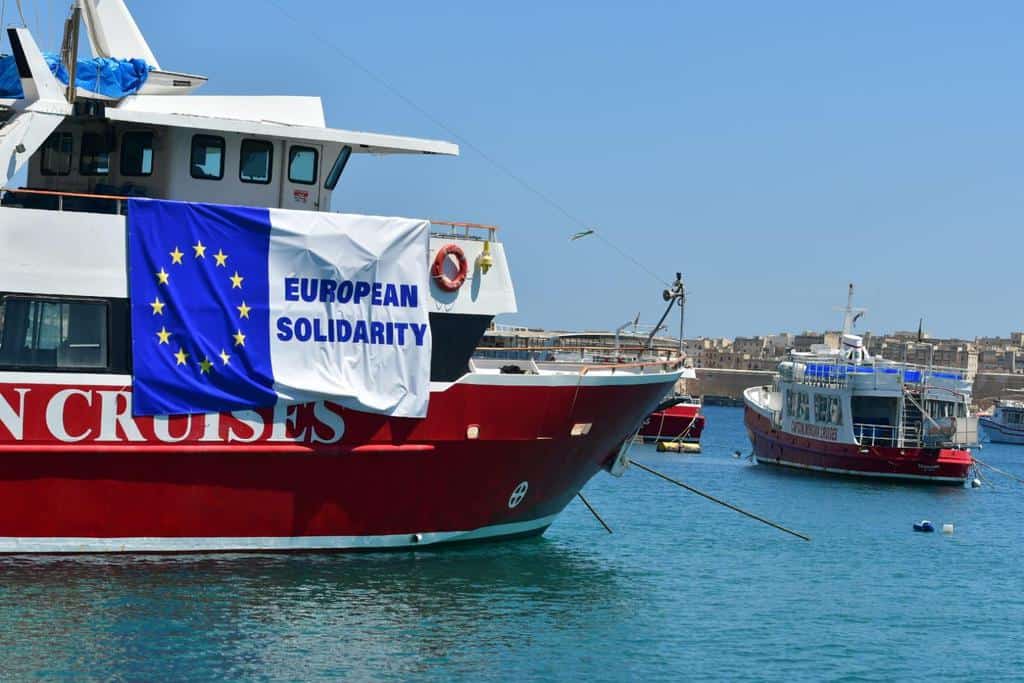 A statement announced this evening the Maltese government was not willing to endanger the lives of crew members and Maltese employees working with migrants it ordered imprisoned outside Malta’s territorial waters. For this reason, Robert Abela’s government has climbed down from its insistence that more than 400 migrants would not be allowed to land on Maltese shores before EU countries commit to take them from Malta’s hands.

The government’s statement made no reference to the endangered lives of the migrants themselves that were imprisoned since the beginning of May on coastal cruisers unsuitable for off-shore conditions.

The current stormy weather forced one of the Captain Morgan ships to seek shelter within Malta’s territorial waters creating a fresh legal problem for the government should it consider to repeat one of the many incidents of the Easter disaster and push migrants back out of Malta’s territory.

The government referred to “commotion” on board the ships. This followed a campaign of government propaganda suggesting that migrants were having a party on the tourist ships. But reports from the ships showed the migrants were reduced to miserable and unhygienic conditions that became ever more intolerable the more time passed. The current bad weather made a terrible situation even worse.

NGOs pointed out that the detention at sea meant that Malta was dodging its legal obligation under its own and international laws to consider any application for asylum from anyone arriving into the country and to grant it whenever the request is legitimate.

The government has implicitly admitted today that it was retaining the migrants out at sea to prevent them from applying for asylum. This will no longer be possible once they land in Malta. The government has now undertaken to consider “within a few days” applications from migrants from countries it considers safe and failed applicants will be pushed back to their country.

“This case confirms that Malta stayed strong even when left alone. Almost no one in Europe wants migrants in spite of all the talk of solidarity.” The language is taken straight out of far-right rhetoric. It ignores laws and commitments Malta is bound with and refers to what countries “want”, rather than what the law requires them to do.

The European Commission has repeatedly insisted with Malta that it is obliged to complete its rescue and bring people ashore to consider their asylum applications. Any relocation can be organised after their landing.

The government’s hard rhetoric is intended for the audience it indulged with its fascist and illegal conduct since the Easter weekend.

Its bullish tone started with various strategies attempted simultaneously: to allow people to starve and die of thirst while waiting for rescue; to illegally push migrants back to Libya; and to force migrants at gun point to sail out Malta’s territorial waters and on to Sicily.

It branded its critics as traitors and acting against the “unity” of the country at a time of crisis due to Covid-19.

Criticism by NGOs and international agencies including the Council of Europe’s Human Rights Commissioner and the United Nations High Commissioner for Refugees, as well as a police report filed by Repubblika, forced the government to find another method of preventing migrant arrivals.

Penning migrants beyond Malta’s territorial waters on coastal cruisers commissioned for the purpose must have been believed to be a temporary solution used as a threat to force EU countries to commit to take migrants before they land in Malta. It was effectively a hostage situation. However, EU countries called Robert Abela’s bluff and the Maltese government has been humiliated and forced to stand down.

The government attempted to justify its illegal policies and actions on the Covid-19 emergency, but when the emergency subsided the government’s policies on migrants imprisoned at sea remained unchanged.

Robert Abela will now have to face the ire of racists, fascists and haters of black people who cheered the government over the last 8 weeks. A story on this website that said the government was considering allowing the Captain Morgan prisoners to come on shore before 21 June met very harsh reaction from far-right trolls all over social media and on the website of the ‘Patrijotti Maltin’ a migrant-hating fringe group.

The government today tried to sweeten the bitter pill by claiming it has managed to get the Libyan authorities to hold on to 1,500 other migrants that would “have easily ended up in Malta.” If these people do exist they are now held in inhuman conditions in Libyan concentration camps hoping to live long enough to make another desperate attempt across the Mediterranean Sea in the hope of better lives.

Previous:GUEST POST: Pilatus Bank revisited
Next:Here is the Europa II entering Malta with migrants that have been imprisoned at sea since 1 May