GUEST POST: And they stick their heads in the sand

Ostriches do, thinking, if they think at all with their pea-sized brains, that once they see no one, nobody sees them.

Apparently the Republican Party Congress men and women and Senators in the USA have Ostrich genes or pea-sized brains or both.

Having lived through four years of lies, half-truths and denigration of the press by their chosen candidate who went on to win an election in 2016, they were themselves, as well as all their electorate, declared by their chosen President, to be illegally elected because the election was a rigged one full of lost or fraudulent votes.

All of us, as well as all of the Republican elected members of Houses of Congress, heard and saw Trump declare years ahead of the election that the 2020 election would be rigged. Their own president challenged their national electoral system but did nothing to improve it. President Trump knows full well that the elections in the USA, though not perfect by any means, are as correct as any or all of our own free elections in this part of the world.

But this was not just a prepared questioning of the election to serve as an excuse in case he lost. It was much worse than that. It was a plan to raise the temperature and to rouse the anger in the hearts of a set of Republican voters known to be dangerous and violent. It was a planned coup d’état which was prepared just in case the democrats would succeed in mobilising the latent majority that for centuries had not had either the right or the energy to vote.

This time the democrats, sparked by Trump and the murder of George Floyd, managed to mobilise the Black and Latino votes as well as those of the lazy middle class and won the election by over 7 million votes, polling over 81 million votes, up from the traditional 65 million or an increase of 25%.

All Senators and Congressmen of both parties saw the attempted coup d’état by Donald Trump take place before their very eyes. Nay, not only that, they were themselves the targets of the violent mob unleashed by Donald Trump.

And yet when it came to punish Trump with a vote of impeachment and a ban on ever running again, the Republican Senators, save seven, played ostrich and voted to free him. This is the USA and it is up to Americans to come to grips with this internal crisis of the Republican Party. It is only for us to look on in stupor and surprise at how a bunch of clever, well educated, long serving Senators could be so blind in their allegiance. And then we wonder how the Italians could adore Mussolini or the Germans Hitler!. Now we know Americans can be like North Koreans too.

Yet Ostriches do not only roam the Iowa Plains, the Rocky Mountains and the orange groves of Florida or the desert in Arizona, they seem to have found a very good nesting place where to lay their large white eggs. They even reached the shores of Malta.

In Malta we know exactly how it works. We also have a two-party system and have the same or a similar situation in our country.  Over the last eight years we have had a slow and clear coup d’état by the inner circle of the Labour Party and a handful of oligarchs. They have bought their way to power; they have placed their own party members driven by blind allegiance in all positions of power, including in the Courts of Justice, in order for the inner circle and the oligarchs to rob the country of all its assets. They have sold passports, hospitals, power stations, building sites, shorefronts, and soon will have Henley and Identity Malta selling Maltese Corona passports too for a price whether one is vaccinated or not.

And the voters and non-inner circle of members of our parliament played ostrich and pretended not to see what was happening before their very eyes and continue to do so under Abela.

It is true there is no widespread violence yet, but the same party 50 years ago, under Mintoff, did the same thing and that time fired up their more violent section of society and their party to capture the State with violence and threats. This time we have become more suave and modern. We murder by car bomb and sow fear in the general population. But the blind allegiance of ostriches with pea sized brains continues in Malta as in the USA.

We have gone so far as to have the entire police, judiciary and Cabinet being led by the nose by hardened criminals. We ask the rank and file of the Labour Party in power to bring our country back to some normality. Get rid of the scum at the top and their trolls who have cheated you, your members and all other Maltese who, though not members of the Labour Party, love our country dearly. Let those with their heads in the sand suffocate in their own spewing of lies and let us, all the others, pull ourselves together and save our country.

God bless America as they say, may it find its way back. God bless Malta as our Anthem says may we also find our way back. 40 months after Daphne’s murder we cannot stop protesting and mobilising an opposition to the present regime. Our own mini-Trump has resigned but has not been chastised just like the real Trump across the Atlantic. 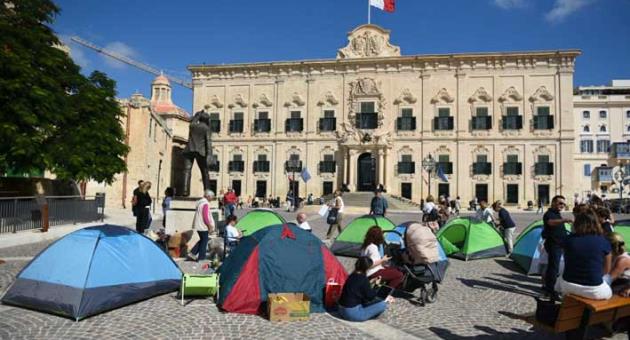