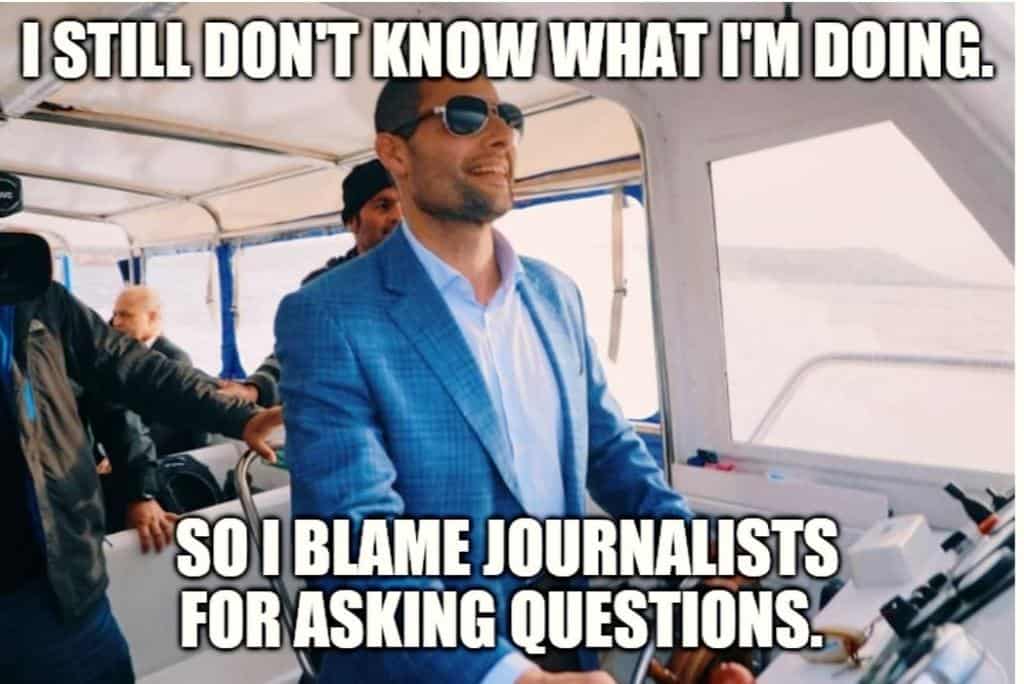 In the pantheon of press conferences given by prime minister Robert Abela in the past year or so, yesterday’s presser was bonkers, even by his dire standards. The first rule of a leaders’ club is not to appear weak in front of the people you govern. I use the words ‘leader’ and ‘govern’ very loosely here because ever since Abela took over the reins of the government (also used very loosely), he was more concerned to take hold of the rudder of his boat rather than the rudder of the ship of state. If this is belaboured and your head hurts, imagine how it must be in Abela’s head right now.

He’s crumbling in front of our very eyes because he knows that it’s not only Covid-19 that has screwed him over but his predecessor who presented him with a poisoned chalice, filling his silly head with notions of statesmanship (ha!) when it’s always been known that Abela is daddy’s boy who has never really worked a day in his life. Has it been worth it, prime minister? Has it been worth it to irrevocably tie your fate to that of the most corrupt leader this country has ever had?

Some, bless them, gave you the benefit of the doubt but that was very short-lived. You are sinking and there are no straws in sight let alone lifebuoys. You have chosen to be the gatekeeper of the secrets of your kingmaker and now you’re doomed because these secrets are weighing you down. And you’re floundering.

Make no mistake. Yesterday’s meltdown wasn’t only about Covid. It was a week of momentous developments and Covid just twisted the knife in.

You gladly served as the proverbial carpet that conceals the filth of your erstwhile boss and chums now they’re wiping their feet all over it. You’re doomed. And you know it. You’re out of your depth and the mutterings and choruses of disapproval are being heard even on your side of the fence.

Yesterday’s presser was a masterclass in how to make enemies and alienate people. First, you kept us waiting for more than half an hour. Why? Why do you insist on being so rude and disrespectful? Unlike you, we have proper jobs and we don’t have time to waste waiting for you to make an appearance like a primadonna.

What a train wreck that was! You knew that and so you tried to score some brownie points by wailing about feeling sick. Woe is me! Arawni, mhux suppost qed naħdem għax għandi mimmi. We waited for tears too because we are used to Joseph Muscat using tears when his back was against the wall as well. We all know how Abela likes to emulate Muscat’s antics at pressers. Crying on camera made Muscat look quite the psychopath. Some people got their kicks out of this psychopathic behaviour; but having a meltdown on camera made Abela look like a petulant child for whom, for once in his life, things weren’t going his way. So he juts out his chin and wobbles his lip.

So weak is our prime minister that if any of our neighbours feel inclined to stage an invasion, they would get on their planes, trains and automobiles and they would be met with no resistance from our prime minister. Because make no mistake, the pandemic is an invasion, an invisible one, but an invasion it is. It’s a war that kills people and maims others. Yes, Abela is right to think that no leader anywhere was prepared for this virus, but unlike Abela (with the exception of other populist leaders like Donald Trump and Boris Johnson), serious leaders took note of the science, told the unvarnished truth to their people, that sacrifices needed to be made, and took the hard decisions, over and over. Did it make them popular? No. Did they save lives? Yes.

What did our prime minister do instead? He fought the science. He politicized the health and well-being of the people. He downplayed the gravity of the situation. He fudged facts, giving a false sense of security to those whose only religion is to believe in politicians. And they are legion. This herd is immune to common sense so if the prime minister goes about his business, like yesterday, without wearing a mask, or giving amnesty to those who broke Covid-19 measures laid down by his own government, then we should not be surprised if these people wear their masks as a chin adornment or not at all, or organize illegal raves in derelict buildings or cram as many people as they can in holiday flats. If the prime minister doesn’t look worried, why should we be, is their reasoning.

The list of Abela’s (non) bon mots is notorious: il-mewġ qiegħed fil-baħar; tħarbtulix is-Sajf; sa Mejju ser nitilqu niġru; kollox taħt kontroll; business as usual; ġenna tal-art. When the elderly and the vulnerable were cowering in their homes; when people who invested their lives’ work in their business were worrying about paying their employees; when people worried about how to pay the bills when people had their heartbroken; when they lost loved ones to the virus, what did our toddler prime minister do? He went to Sicily on multiple trips on his boat, ate ice cream and went to spinning class. Hai voluto la bicicletta! Eh, mo’ pedala! (You made your bed, now lie in it).

Yesterday we saw a prime minister whose astonishing self-belief crumbled, who finally admitted, not in words, but through his actions, that he has lost control. To be honest, he never really had it, on anything. But he had, still has, arrogance a-plenty. Where do you get off attacking journalists for asking questions, prime minister? We pay your salary, you work for us. You are accountable to the people. As Caroline Muscat of The Shift News put it this morning, journalists are asking ‘questions that reflect the public’s concerns.’ You don’t owe anyone an apology, you screamed yesterday from your pedestal, or was it a pram?

Stop smirking, Chris Fearne. Int mhux aħjar minnu. Who said that Malta won the war last June? You, gustuż. As a doctor, you should have known better. You know that such viruses operate in waves, but you chose to put politics over science and in my eyes, your blame is so much greater. You are impressing no one with your poetics. You fancy yourself as quite the poet. Yesterday you told us that ‘Kull vaċċin huwa daqqa ta’ stalett fil-virus’ or similar stodge. Do you remember when you kept telling us in March/April that the ‘brook’ must not turn into a ‘tsunami’? Paroli għandek kieku, ieħor.

As for Professor Charmaine Gauci: many, including myself, felt apoplectic when we saw Abela answer the questions that were meant for her. But then, I am sorry to say, Professor, you never really stood up to the politicians. Tell us, Prof, what was going through your head when you fronted the ridiculous fireworks display in June heralding Malta’s victory over war?

Those feeling sorry for her for being made to look like a chump yesterday should remember that Professor Gauci always parried uncomfortable questions that did not reflect the government’s line either with deflections or by not answering at all. F’Ġieħ ir-Repubblika, Professor Gauci, stand up to be counted or step aside.

The worst thing about yesterday’s disgraceful spectacle by our prime minister is that he only felt sorry for himself. He doesn’t feel sorry for the deaths that could have been avoided had he not peddled the fatal mechanisms that swung the door wide open to the virus and its variants.

At the beginning of this year, Abela went on the party radio to prophesy that 2021 would be the ‘best year ever’. We all know what ‘the best’ means under Labour. In Malta of ‘l-aqwa żmien’, the people are being robbed blind, a journalist was killed, and people are dying because of the government’s incompetence. Għadek sturdut, Abela? Għandek biex.

Previous:Nadine Lia recuses herself from case against suppliers of bomb that killed Daphne
Next:Ian Refalo again