This is the second part of the interview I and Ellen Trapp of German ARD TV did to Jonathan Ferris. In this portion of the Ferris Tapes, Jonathan Ferris speaks of how an attempt was made by the authorities to involve him in an effort to discredit whistle-blower Maria Efimova who first spoke of payments from the Aliyev family to the Muscat family.

He also speaks how after he refused to participate in the frame-up of Efimova he was taken off investigations into information leaked by the Panama Papers.

The first part of the Ferris Tapes was posted on this website yesterday.

Part three will be posted tomorrow. 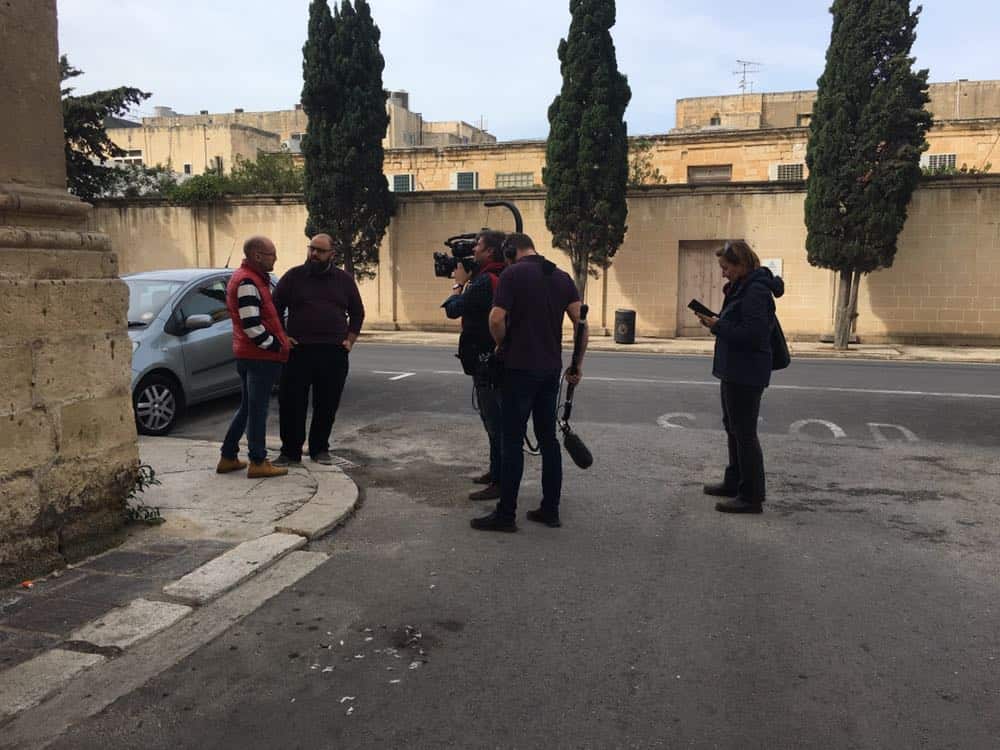 MD:  Ok, we need to speak about your time at the Financial Intelligence Unit.  We have seen a draft report, for example, that speaks, that investigates the procurement of the oil tanker down south. And that draft report says, from what we have seen, that money was paid into a bank account in Dubai, 17 Black, and from there, into the accounts of politicians.  That report says that, it actually shows documentation about those transfers.  So we’ve both seen it.  You’ve seen it before me but we’ve both seen it.  Look at it from outside.  That evidence, shouldn’t under normal circumstances lead to investigation, raids, the attempt to block evidence, take it to court, prosecution?

MD:  It didn’t.  We’ve heard nothing since then.

JF:  There are magisterial enquiries.

MD:  OK, how did those come about though?

JF:  Those came about not because they were instituted by the police but because the Opposition leader filed for an enquiry in Court.

MD:  So as an individual, as I could, or anyone could that, when the police failed to do their job

MD:  And they did none about this, in spite of this report we’ve all seen. OK, so that’s one. Then there’s other FIAU investigations about interests held, secret interests held in Pilatus Bank in Malta.  That was also investigated by the FIAU.  We know of these reports

MD:  Before your time and yet, you came in, they were already there, and from the outside no action is taken.

JF:  They were already at the Police.

MD:  Before you went in.  And what happened?

JF:  I don’t know about that.  They are still at the Police.

MD:  So it’s before your time, so you’re absolved of discussing this, you can discuss it with me.  If you were a policeman in here, with the evidence we know that is in that report, how long would you expect before action would be taken in Court for those sort of crimes?

JF:  I would just go to the Attorney General, ask for an attachment order, and proceed from there.

MD:  It would have been months ago now.

JF:  It would have only taken me two, three days.

MD:  And yet two years later, nothing’s happened.  OK, now FIAU. Actually when did you basically start reporting for duty there?

MD:  And when was your last day?

MD:  Let’s leave aside the investigations you saw, the findings you had.  You cannot speak about those.

MD:   But tell me about the working environment.  Tell me about, were you free to investigate when you were there?

JF:  I was free to investigate, however, on the 27th April 2017, it was Saturday, I received a very strange SMS from the Deputy Director telling me “listen, are you planning to go in to the office this morning?”  I said “most likely, why”.  He told me “because there is going to be a high level meeting”, he told me “no, no, no”.  I said “ok, thank you, I’ll take it for free”.  Then I remember going to the Bank and whilst I was at the Bank, I started to receive a telephone call from the Police Board, and the Secretary of the Police Board which is Mr John Spiteri told me “Listen, we need you to re-testify in the case of Maria Efimova”.

JF:  Yes, I arrested her on the 11th August 2016, on a report of alleged fraud, actually it was misappropriation, filed by the Bank.  So, but in the meantime this lady went you know, went heavy on us, she was claiming that two officers manhandled her to bring her to my office.  She was claiming that she was pregnant and I deprived her from food and drink.  Somehow she pressed her arguments, you know, I was investigated by our own internal office, here at the Police Headquarters, not only myself but also a superintendent, another inspector, one police sergeant.  Then in February we were asked to be present for the Police Board, everything was OK then in April I received this telephone call.  “About time”, I said, “what’s up now”.  He told me “listen, next Monday you have to come”.  I said “OK”, not next Monday, sorry, because it was a public holiday, it was 1st May, but it was Tuesday 2nd May.  In the meantime I had another telephone call from an inspector saying “listen, the Attorney General is asking about the case of Maria Efimova because me and the other inspector we instituted a criminal defamation against Maria Efimova because she defamed us.  And all of a sudden, the Attorney General was seeking information on our case of defamation.  I said, how come all of a sudden now…

MD:  Do you think he was doing it to discredit her?

JF:  Yes, yes definitely, but at that time I did not know what’s about to happen in the afternoon.  First of all I was at the Bank, I was not taking notice of any…

MD:  OK, so the Attorney General and the Police were contacting you again months after the case to tell you “tell us more about what she did to you, tell us more about how this woman is a bad woman” basically. That’s what’s happening.

JF:  Yes, that’s what happening.  Not to me but to my other colleague.

MD:  And then eventually you find out why they were doing this.

JF:   Yes, in the afternoon I said, now I know why, because they wanted to discredit her, you know.

MD:  Because the story broke

MD:  The story broke that the daughter of Ilham Aliyev of Azerbaijan had paid money into the account in the name of Michelle Muscat, Joseph Muscat’s wife, that was Egrant, a Panama company with a bank account at Pilatus in Malta.  This is where really the storm hit, and we went into an election a few weeks later.

MD:   So they contacted you to try to help them discredit her.

JF:  They were going to try to either frame me or frame Maria Efimova.

MD:  And then, your stay at FIAU, how did that end up?  So you didn’t cooperate with this sort of attempt at a discrediting exercise, so what happened to you after?

JF:  No, I just went with the lawyer, I said “listen, I have nothing to add further to my testimony in February, so please leave me alone”.  Retired judge Depasquale absolved us from any wrong doing, completely.  Then this I found strange, and it’s from this instance that I actually felt disgusted, I felt betrayed and I lost all interest in the Unit, when the Director and Deputy Director they called me, they said “listen, you have to stay away from all investigations of the government relating to Panama”.  I said “strange, why?” They told me “because you have conflict of interest, because you have arrested Maria Efimova”.

MD:  They took you off the Panama cases.

JF:   Yes.  Now, I said “Are you completely sane? What’s happened?” Because up to the Friday before, we were discussing how to go about the investigations.

ET:   How corrupt is the island, Jonathan?

JF:  In my case, I tell you 100% because I know that I’m in the right, you know, they’ve done me wrong, so for me they’re all corrupt, from the President downwards.  And I tell them this so if they want, they file defamation and libel proceedings in which case, the Court will have no other option but to absolve me from my secrecy because I have a right to defend my own case, and I will throw them what I have to their faces.