No, it is not OK for Ministers to meddle in criminal investigations.

Carmelo Abela is nobody’s least favourite Labour Minister. He certainly is not mine.

He’s not alleged to have secret companies in off-shore jurisdictions. He’s not alleged to have visited brothels while on government duty. He’s not known to have threatened whistle-blowers with prison. He’s not suspected of having facilitated fabrication of documents to help illegal fuel trafficking. He hasn’t condemned the press for doing their job. He has not kept in his employment canvassers who collected tangenti for government contracts. He has not employed on his staff visa scammers and frauds. He is not known to have personal drivers chasing people down the highway and shooting at them in traffic.

Not that we know anyway.

Which on the whole, in comparison with his comrades, he’s not too terrible.

And yet, in spite of not quite being the darkest coal in the pile, the calls for his resignation are entirely justified.

A staffer of his, in writing and with Minister Carmelo Abela in copy, asked a police inspector for a progress report on investigations that were ongoing into a specific case. When the police inspector politely refused he received a response from the same staffer insisting the information is required by the Minister.

In a conformist country like ours, where authority from above is unquestionable and unimpeachable, the few who say no are singled out as odd troublemakers.

But these are heroes in a country where they are so rare.

If a minister does that, the government steps into institutions that are required to be autonomous from it so they can investigate it and act on its wrong-doing. 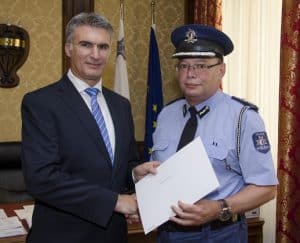 Carmelo Abela should have exercised restraint. He should have known not to ask individual police officers to account for themselves to him on progress on any specific case, whatever his interest in it. He should have known this is a usurpation of police autonomy. He gave an illegitimate order which, judging by Ferris’s superiors’ reactions to it, he was in the habit of doing as a matter of course.

Until he found an upright policeman who said they would not stand for it.

Carmelo Abela breached, possibly out of habit rather than out of malice, the fundamental limits that our democracy imposes on our government ministers. This is not some new-fangled notion. The independence of law enforcement agencies in the investigation of criminal matters has been sacred since before anyone bothered to write the rule down. It comes with the abolition of the divine right of kings and the republican principle of equality before the law, even in antiquity.

Carmelo Abela will be telling his mirror that in contrast with Manwel Mallia, his predecessor, his moderation and restraint must have looked like the Buddha stepped in to take over from Genghis Khan.

That does not matter now. His position is untenable.

If he refuses to resign he joins the ranks of the worst of his colleagues who daily act with contempt of the basic democratic principles of accountability and rule of law.