Edward Scicluna, in theory the man in government responsible for the oversight of all public spending, went out of line earlier today and ‘clarified’ the government was funding Puttinu directly from the state budget, not out of revenue from passports. 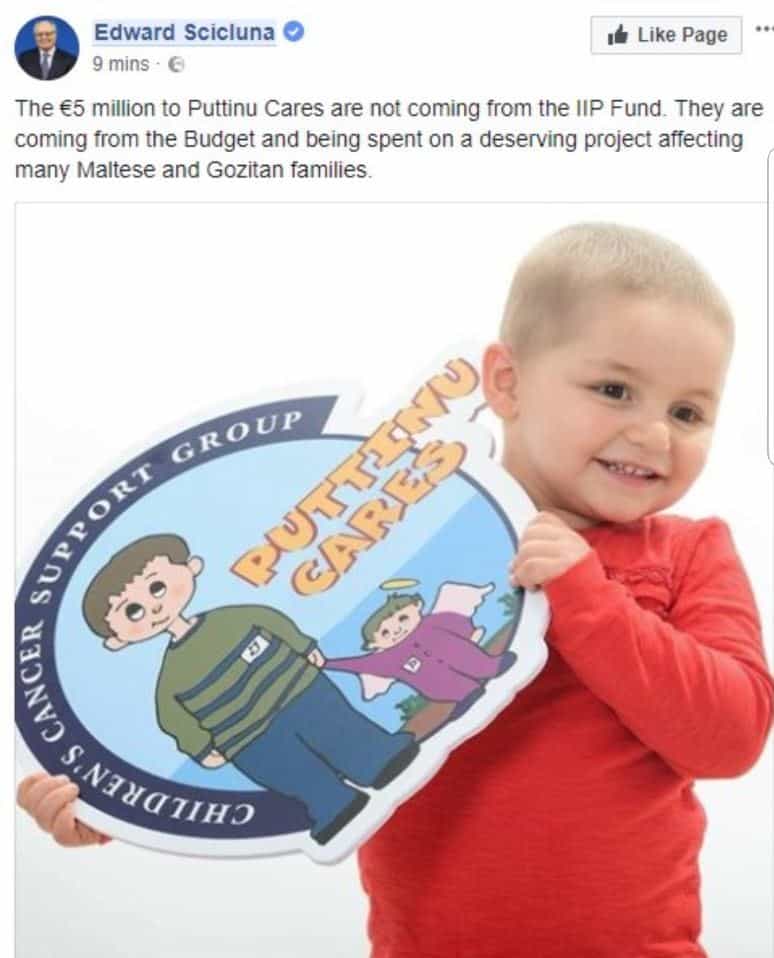 He should know. He’s the one who signs the paperwork. Although he should also know that the proper way for the government to spend public funds on a “deserving project” is to deliver it itself after public procurement according to law not give it out to charity.

Except that his line was not consistent with the narrative of the government that started with that infamous call made by Joseph Muscat to Peppi Azzopardi Friday night that did not seek to help the care of child cancer patients as  it tried to cleanse the filth of the citizenship sale scam.

Right on cue Labour spokesmen marched to extol the IIP scheme and the benevolence of the prime minister. It was summed up in Robert Musumeci succinct post that the ‘IIP was serving its purpose’.

Well revenue from the IIP is now in 9 digits so about time it starts ‘serving its purpose’ after all those years of backhanders to the powerful, including, as it appears, to the personal bank accounts of Keith Schembri.

You see if Edward Scicluna is right and support for cancer patients is being funded by the state’s regular budget, the real political usefulness to Labour of attributing it to the passports scheme falls through.

Labour needed this to be attributed to passports because of the international criticism of the scheme as a back door for sanction-dodging plutocrats. It needs to galvanise support domestically linking in people’s minds the removal of the IIP with denying children cancer treatment.

He treats the population like Pavlov treated his dogs and no wonder. So many oblige.

That’s how this is seen. As some form of victory over Beppe Fenech Adami and Jason Azzopardi who wrote about the indecency of the government’s abuse of the suffering of cancer patients to score political points.

Trust Adrian Delia to leave Beppe Fenech Adami and Jason Azzopardi alone to face the fire and posting an ambiguous line on his Facebook page intended to please anyone who reads it, no matter their view on the matter. Faith, here’s an equivocator that could swear in both the scales against either scale. 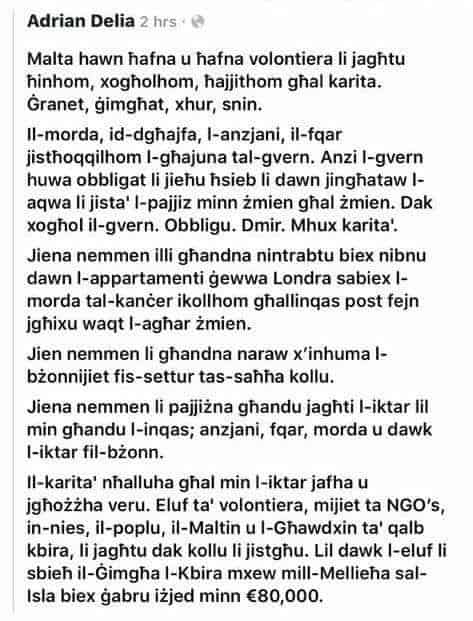 And then there’s Edward Scicluna whose political instincts are sophisticated enough to display a cancer suffering patient as political exchange but not enough to figure out the disturbing mind-fuck Joseph Muscat is perpetrating on the entire nation.

Which is why someone called Edward Scicluna and make him take that post down. The facts do not matter. The will of the great leader does.

Previous:Kathimerini interview with Maria Efimova
Next:THE SUNDAY TIMES: Who is the boss?