The Speaker’s decision to block Simon Busuttil’s question to the Prime Minister whether the chief of his staff has a bank account in Dubai and another at Pilatus Bank is a scandal. But you wouldn’t know that. In a world where all pigs fly, an airborne ham is unremarkable.

The Dubai bank account is mentioned in the Panama Papers and was investigated by Daphne Caruana Galizia.

It was also investigated by the New Zealand government which was looking into how New Zealand was being used by corrupt politicians to hide their money. Here’s an extract from that inquiry.

And here’s an extract from Daphne Caruana Galizia’s findings into the matter.

The Pilatus Bank account is revealed by the scandal published by Simon Busuttil himself who when Leader of the Opposition spoke on how Keith Schembri received kickbacks at Pilatus Bank from passport sales. 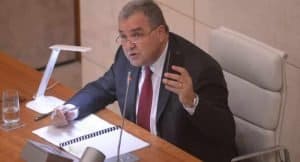 The Speaker blocked Simon Busuttil’s questions, a rare occurrence indeed. The speaker cited the requirement in standing orders that questions put in the House are “relating to public affairs”. (See clause 26).

There is no specific definition of public affairs so we’ll have to rely on what one would normally understand with the term.

Is the fact that the prime minister’s chief of staff holds a bank account in Dubai revealed by the Panama Papers to have been set up after his appointment into office at the same time as an off-shore company in a secret jurisdiction was being set up for him and for Konrad Mizzi and for the owner of Egrant Inc a public affair or is it not?

Is the fact that the prime minister’s chief of staff holds a bank account at a bank alleged to administer the accounts of family members of the Aliyev family in which he is alleged to have received kickbacks on the back of public revenue of a government scheme introduced since he came to office a public affair or is it not?

Of course they are. The Speaker’s decision to block these questions is nothing sort of censorship: a silencing of the legislative chamber in the exercise of its legitimate constitutional function of holding the executive to account.

The Speaker is not just the regulator of order in the House. He is the person that embodies the sovereignty of our Parliament. On his shoulders is the burden of protecting our elected representatives from the abuse of power by the executive. He has the task to ensure our legislative chamber and its members have all the means the constitution promises them to hold power to account.

But in the reality of this regime, the Speaker is another agent of the executive. He is a low-level henchman seeking his own preservation by ingratiating himself with his masters whilst whipping his own kind.

Is it not marvellously ironic that the Speaker of Malta’s parliament is disallowing questions about Maltese politicians already asked and answered in the New Zealand parliament by the government there?

It is time to ask Anġlu Farrugia a question. Did he consult the prime minister’s office before informing Simon Busuttil he was refusing the latter’s questions? Did he seek the advice of anyone in the executive – not to call it instructions – in this matter?

Because here is the scandal in this matter: is our Parliament once again a place where any serious opposition to improper governance and corruption is crushed before it dares to raise its head?

Previous:G Farrugia Calleja: You couldn’t make it up
Next:Cheese omelette