Nicky Vella de Fremaux, Adrian Delia’s wife, is back on Facebook. She had deactivated her account during her husband’s leadership campaign. In an 8 October interview with Rachel Attard of The Malta Independent she explained her reasons.

From that interview: “You have always been outspoken. Why did you close your Facebook page? I did not do it because Adrian was running for the PN leadership, but because the minute his candidature was announced I started receiving offensive and cruel messages, even about my children. At that point, I decided to close my Facebook page because I was seeing it as an artificial reality.”

That may have been a bit of an incomplete response.

The world became aware of Nicky Vella de Fremaux early on in her husband’s campaign when she espoused the idea that Franco Debono should be rehabilitated in the PN. 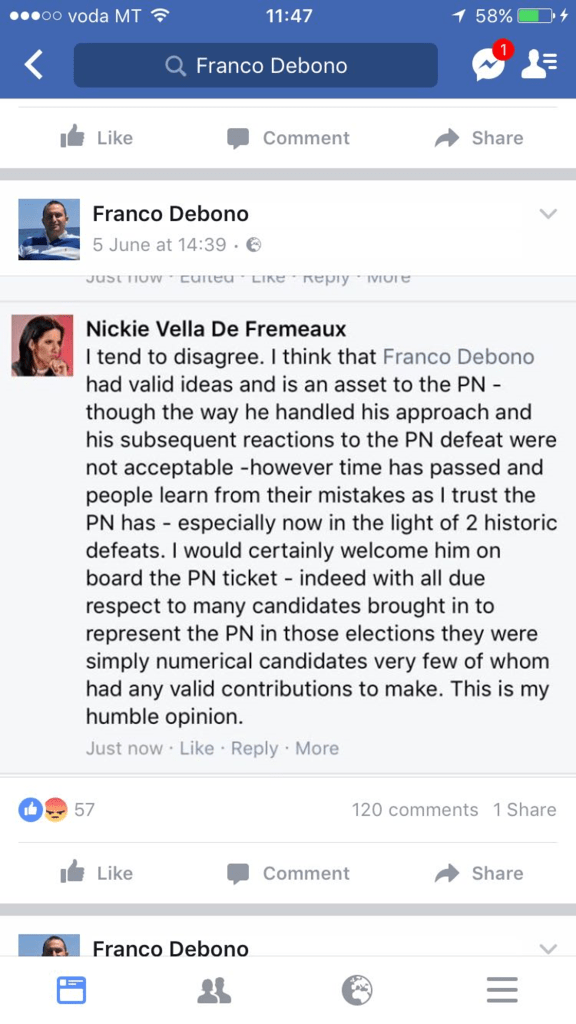 Clearly that happened a bit prematurely and Adrian Delia was forced to say he found no space for Franco Debono in his PN.

That too appears to have turned around with Franco Debono’s epoch making visit to PN headquarters the past few days.

With Franco Debono’s rehabilitation, Nicky Vella de Fremaux must have realised her forced silence was no longer justified.

She actually reached out to Rachel Attard, to whom she had lied about her reasons for staying out of Facebook, to consult her on whether it was time to come back out in the “artificial reality” of Facebook.

The nudge, nudge, wink, wink in the message: does she realise people actually see what she writes even in this “false reality” as she calls it? 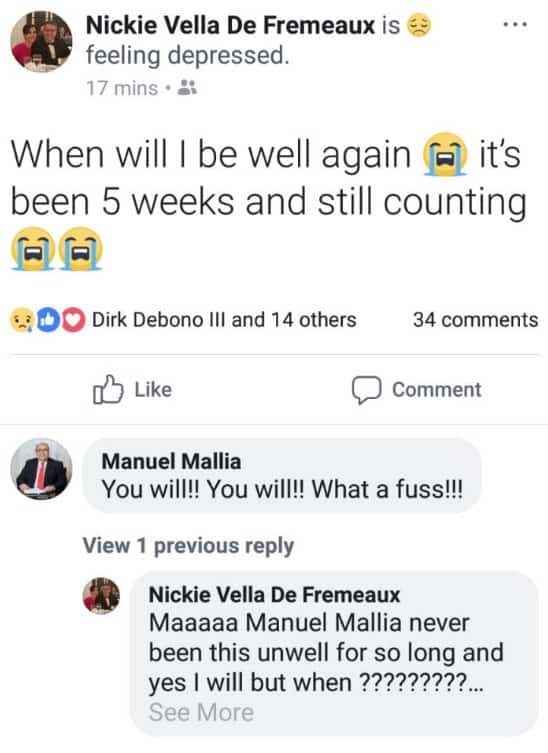 Whatever feedback she got she has decided to come out and declare on Facebook that she has been depressed for 5 weeks. If she means ‘depressed’ in the clinical sense of the word, she has my sincere sympathy.

And Manuel Mallia’s as it turns out.

In the meantime in her Facebook reality as in any other, some uncomfortable questions are being asked of her, having been ignored by her husband before now. One would hope these questions do not have a negative impact on her condition.