On Monday 9th April, the House is set to discuss amendments to the law that will take into account those made by Jason Azzopardi that will seek to remove the clear and present danger of SLAPP suits in foreign jurisdictions. The word on the street is that the Government will not support the anti-SLAPP amendments.

A few salient points need to be made, a context given, as it were.

Maltese law has jealously, and (too?) zealously, protected the reputations of ‘the great and the good’ (inverted commas deliberate) for many years, virtually since printing became easily accessible. Over the years, there has been a loosening of the strictures, with a more liberal attitude being taken by the Courts towards protecting reputations at the expense of proper scrutiny of the less great and the not-so-good.

Pretty much, the Courts are starting to say, if you’re a public figure, you need to grow a pair and take it on the chin, though this doesn’t mean you can be lied about with impunity.

But even within this trend towards liberalism, there can be found what I think is a sufficiently robust level of protection of reputations, be they political, personal or commercial. This is clearly not a feeling prevalent amongst assorted “international” outfits that have been the target of rather pointed reporting and comment over the last years.

Let’s not be prissy about it: it’s the Pilatus Banks and the Henley & Partners of this world and their like who have reached for their briefs and threatened to start – and sometimes actually started – potentially ruinous law suits in far-flung, and expensive, jurisdictions against Daphne Caruana Galizia, who didn’t cave in, The Shift, who also didn’t, and other media houses, who cravenly did.

To be clear: it is not only the potential end result of these cases (stupid-level damages) that would be ruinous, it is the cost of defending them, with even semi-decent lawyers costing several hundreds of dollars or pounds an hour.

The alternative – not defending the case – is simply too risky as the law stands, because foreign court judgements can be enforced in Malta, provided certain conditions exist.

It is entirely possible, it should be said for the sake of completeness, that the Constitutional Court would eventually strike down such a foreign judgement. This would be on the basis of the fundamental freedoms we still enjoy, the Constitution not yet having been messed around with by those who would love the free press to disappear.

I, for one, would however feel it was imprudent to advise a media house to rely on this possibility while extending two fingers in the reverse-Churchillian style. Justice might be the side of the media house, but the law would not necessarily be.

This is precisely why Jason Azzopardi’s proposed amendment to the law is highly appropriate and why the Government’s quasi-neo-colonialist queasiness so nauseatingly inappropriate.

One of the few grounds on the basis of which a foreign judgement will not be enforced is that if it is in breach of Malta’s public policy. Even the mere fact that, as I’ve pointed out, the Constitutional Court could very well shoot down a foreign defamation judgement is – or should have been – sufficiently indicative to the Government that there are already very significant public policy considerations to take into account. 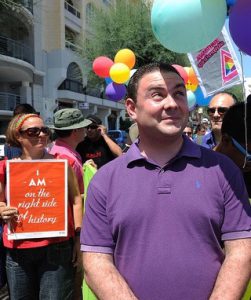 But Owen Bonnici and his advisers are having none of it.

They are worried, poor lambs, that our execution of our “European responsibilities” (not that Arizona is in Europe, but anyway) would be found lacking if it was stated clearly and unequivocally that it was Maltese public policy that defamation suits against Maltese media operators can only be countenanced if they are tried in a Maltese court.

It would be heartening if these noble sentiments were to be applied to the full range of our “European responsibilities”, but as it is, I believe it is fair to charge Bonnici and company with cherry-picking. And with pandering to the interests of “Big Business” rather than encouraging the Fourth Estate to hold it to account.

Adopting Jason Azzopardi’s anti-SLAPP proposal would go a long way to countering these charges, but I’m not holding my breath.

Previous:Are the works in Burmarrad still to start?
Next:What the Council of Europe ambassadors really said