Several people sent me the screenshot below.

I was so revolted by it I could not for several hours bring myself to publish it. Sometimes people expect that when someone one disagrees with utterly embarrasses themselves with their behaviour, one would gleefully parade their behaviour to score easy points.

I feel no satisfaction in seeing people behave so stupidly. But then I remember that I do not write here for my own satisfaction. If we do not confront our demons we’ll never begin to heal. Not that this gives one much hope that might happen soon.

So if you haven’t seen this before now, take a look at this. 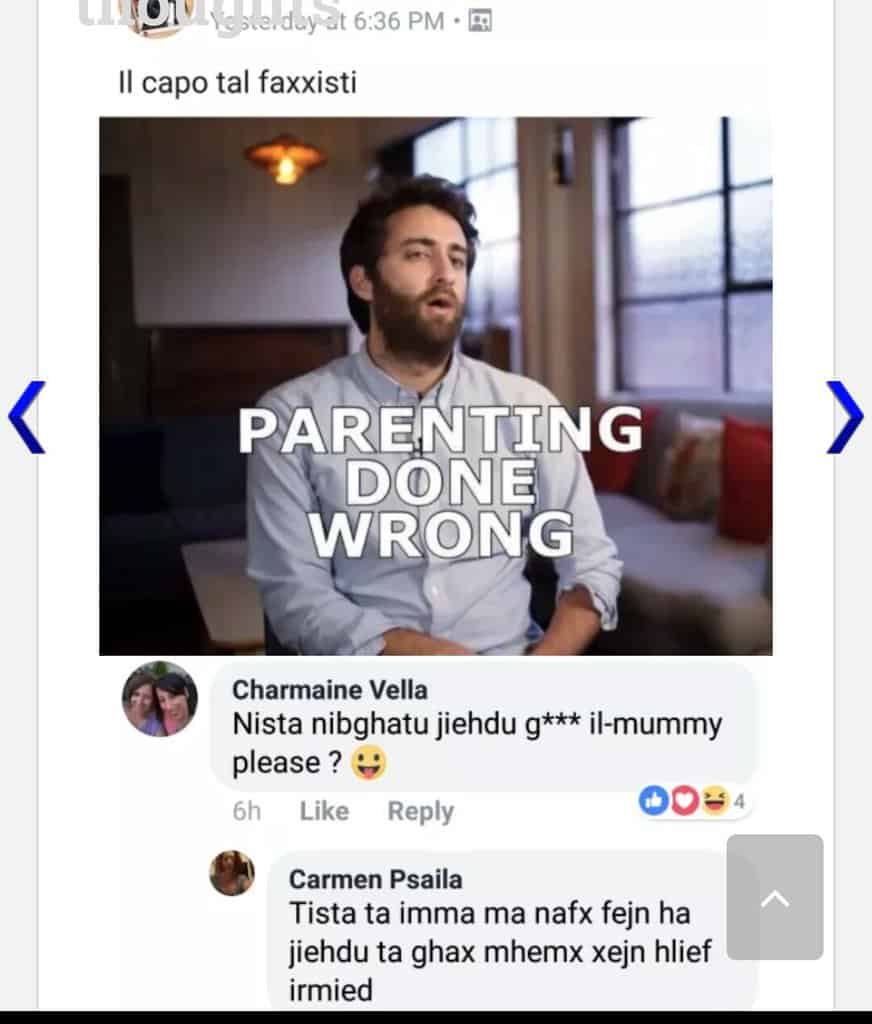 The meme is moderately insulting and the headline a classic case of projection. The comments beneath are some of the worst things I’ve ever seen written. “Can I send him to fuck his mother please?” “Sure. But not sure where he can put it as there’s nothing but ash”.

It took me hours to bring myself to write that down. It is not just that it is hurtful, mean and cruel. It is dehumanising to an extent that would compare well with cartoon Nazi propaganda. It is almost perversely prurient, written to titillate the fetishistic sadism of like minded readers.

But it also a snapshot of the “repercussions” Joseph Muscat unleashed in his speech yesterday and that will escalate to an ever more frenzied degree until the May Day supremacist gathering that the Labour Party is mobilising.

Charmaine Vella is not your garden variety Joseph-loving troll. She is an employee of the Labour Party. Here she is at Super 1 where she works and, in her own words “she belongs”. 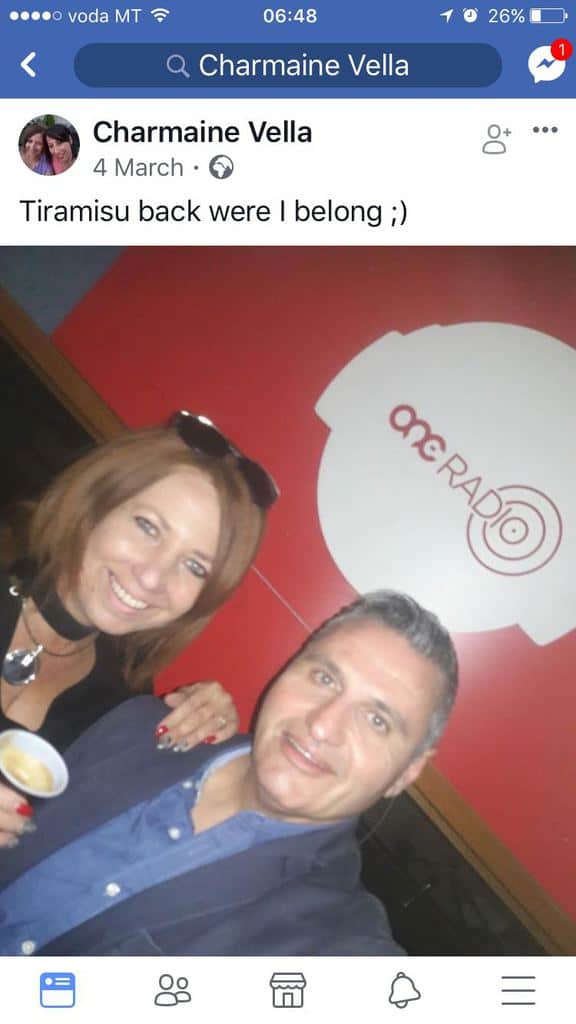 This is officially sanctioned trolling. 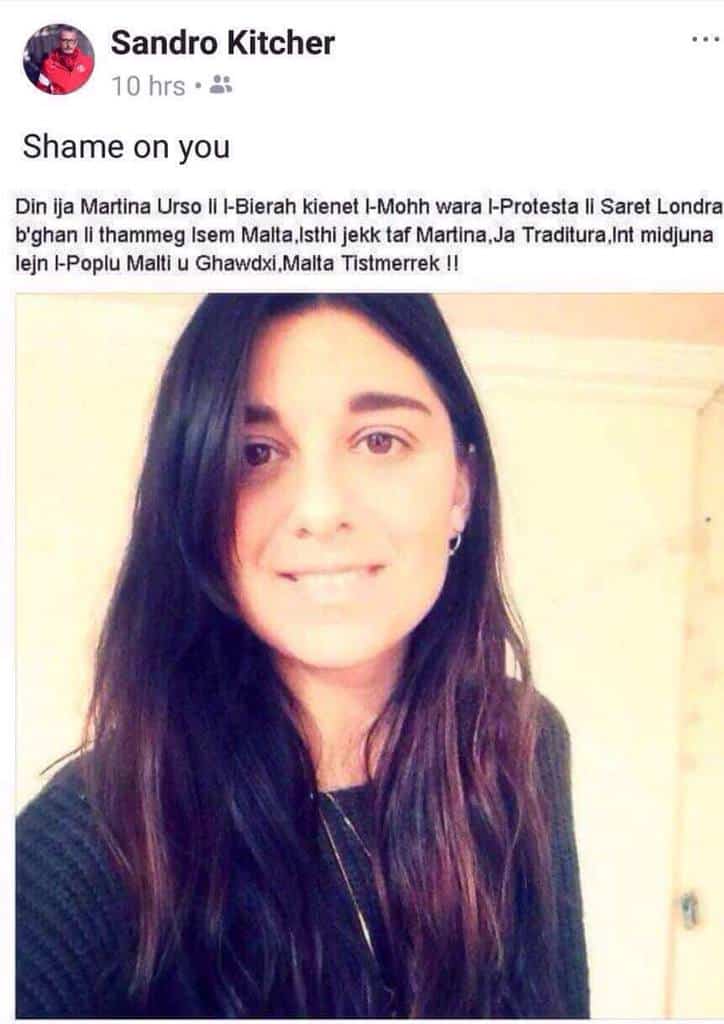 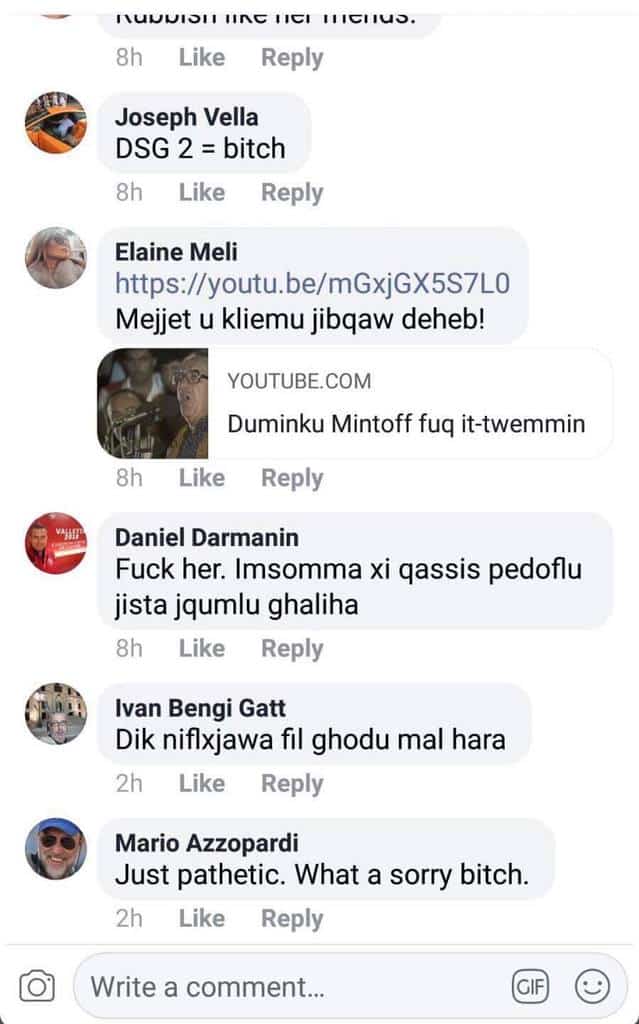 Sandro Kitcher works at Valletta 2018 Capital of Culture organising committee. He parades a protester who dared tell Joseph Muscat he should be ashamed of the worldwide embarrassment he has caused the country. Many others did. In some posts they published her home address inciting people to physically hurt her.

Then a colleague of his at V18 butts in: Mario Azzopardi, “artistic director” at V18, calls a woman who dared protest a “sorry bitch”.

Obviously this followed their boss Jason Micallef — he who 72 outraged Members of the European Parliament have asked to be fired from his job — who beat the drum to mobilise crowds for the May Day scare fest.

Again these are no ordinary trolls. They are Labour Party functionaries, employees, cronies and hangers on. These are people who unlike the protester they are branding for lynching have a direct financial stake in the continuation of Joseph Muscat’s regime. Protesters hold no personal stake either way. They simply risk much — careers, jobs, family, even their lives it would appear — for love of country and they are innocently accused of the most hurtful crime a patriot could be accused of: treason. 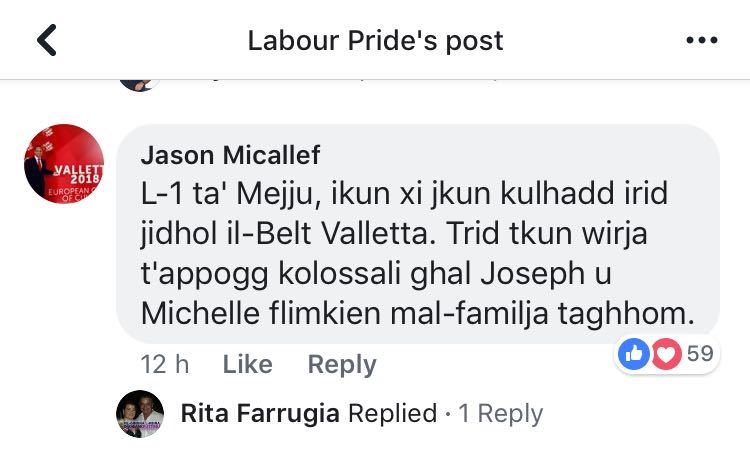 Here’s what these people are pledging for protesters. 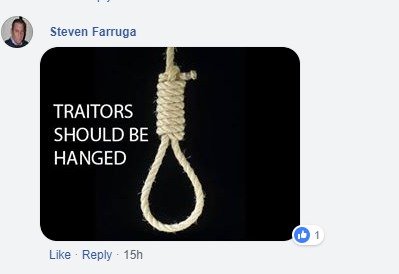 There is good reason to fear. There are good reasons why a Greek court refused Malta’s request to extradite Maria Efimova as Malta could not guarantee her safety.

But there is no reason to stop. Hate must be repaid with dignity. Frenzied and manic fury must be exchanged for reason and compassion. But my God it is hard.