What the MFSA does not explain

It’s all well and good for the MFSA to assure us that its regulatory function was fully exercised while Pilatus Bank was in business. (See their statement below). They tell us they engaged an overseas “intelligence” firm before licensing Pilatus and they kept the bank on a diet of inspections and verification while it exercised that license here.

What an ironic term “intelligence” is when it misses what is in plain sight. Of course we cannot expect infallibility from anyone. Our regulators must rely on the information they manage to gather and if something falls through the cracks we can only hope they’ll pick up the error later.

But the MFSA this morning issued a statement without a shred of humility, never mind any apology to the Maltese public for having licensed in their name an unqualified banker who had been conducting criminal financial activities before his first application to the local authorities.

The standard excuse at the moment seems to be, ‘look, we did our job; we did the due diligence; we did the periodic reviews; the file is as thick as it is meant to be; so any criticism levied towards us is unfair’.

As many things coming out of banal bureaucratic arse-covering exercises, I am reminded of an episode of Yes, Minister. The episode I have in mind is the one where a hospital ranks first in efficiency: no case delays, no surgery waiting list, no spending beyond budget. The thing is the exemplary hospital is not open to patients. And nor should it. Patients would slow the hospital down and make statistics look bad.

Anyone could understand – though perhaps not everyone would necessarily believe – an expression of regret by the Authority for having missed what the law enforcement agents of other countries have picked up.

The distinction between the grounds of arraignment of Ali Sadr in the US and the activities of Pilatus Bank is irrelevant. No regulatory authority would license – or should license – a crook. If someone suspected of arms dealing or drug trafficking showed up with 10 million euro at the MFSA and asked to be licensed to operate a bank in Malta, I’d like to think they’d refuse. I’d like to think that they’d suspect a clean bank owned and operated by a dirty person to be a front or a cover or a launderette for illegal activities.

Therefore MFSA cannot justify itself by saying the grounds for the US arraignment would have been irrelevant to its considerations on Ali Sadr’s eligibility for a license.

But that’s not what it’s saying in its statement of today. It’s saying, ‘we did our job and we are not accountable for the fact our efforts were unsuccessful and consequently profoundly damaging to Malta’.

They’re not telling us who they paid to check out Ali Sadr for them and what they reported.

If they do not have the ability to attempt to present the more desirable excuse that they were negligent or incompetent or poorly advised, we are left with the alternative that they covered up what they knew of Ali Sadr when they licensed him, that they knew he was a veteran of financial crimes and ignored that fact, that they betrayed the trust of the United States (never mind of Malta) by willingly allowing a bank fraud and sanctions-buster to give the world an image of a clean act from Malta.

MFSA’s statement of today does nothing to take the Authority out of the dark place it has plunged itself into. Quite the contrary, in missing the opportunity to give even an attempt at an explanation we can understand, it has made its position worse.

The MFSA is not telling us anything about how Pilatus Bank was licensed. It is not telling us how the advisory team at KPMG took Ali Sadr’s brief when other firms had refused it. How Ali Sadr’s external advisors at KPMG joined the senior staff of the bank after the Authority licensed it. How this supposed banker was accommodated in spite of the enormous difficulties of his application, compensated only by his deep pockets.

The MFSA said nothing about its interactions with Pilatus Bank and its advisors when suspicions arose within its own ranks and at the FIAU about the Bank’s activities. It did not report about how it ignored its own staff when they raised concerns about the bank; even when it was beyond evident to investigators that there was malicious and criminal intent in the activities of those who ran the bank.

The MFSA may well have done its job as it asked us to believe today. But it did not do it well.

And their statement on the matter is simply insufficient.

In a civilised country we’d be having an independent expert inquiry supervised either by judicial or parliamentary authority. Instead we have a stone-walling authority intent on covering up the truth to spare any further embarrassment to those who possess our country as their private interest. 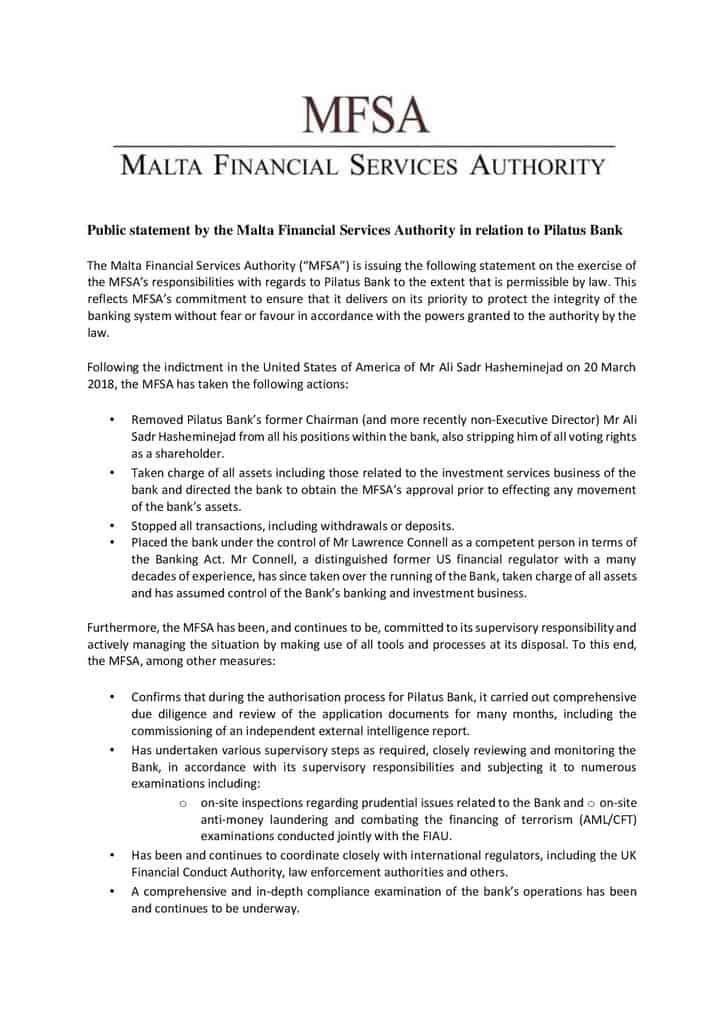 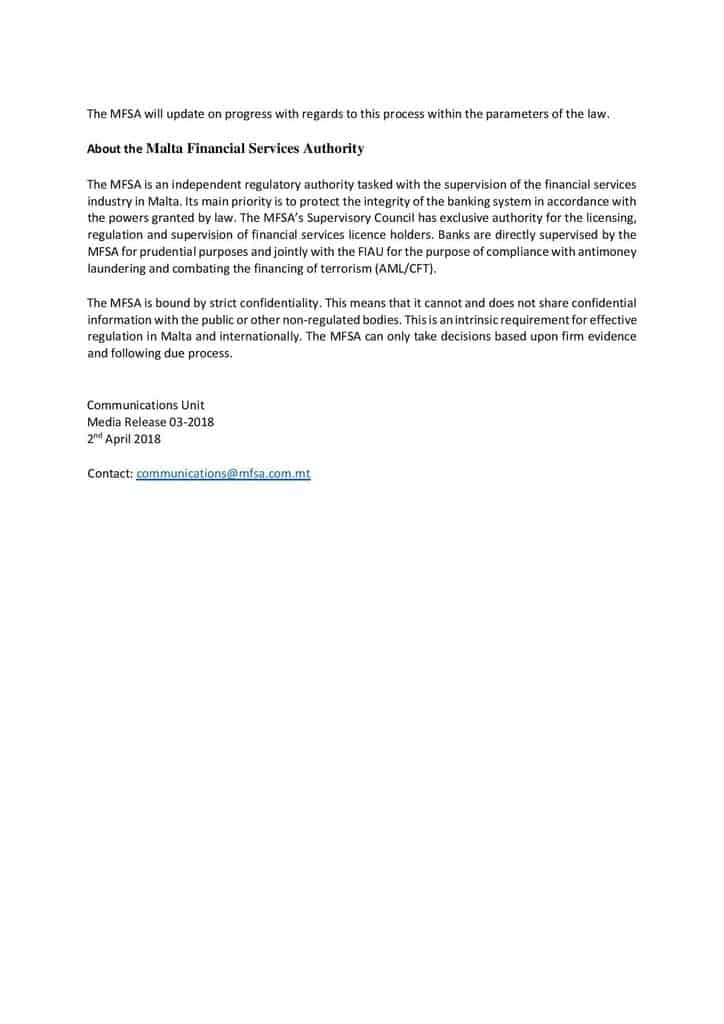 Previous:GUEST POST: Pavlov Mark 2
Next:Six months on. Don’t let them think they’re getting away with it