The government were fuming with fury yesterday because a UK House of Commons inquiry cited this blog as a source of information. It got to the point where they made formal diplomatic representations with the UK government telling them to admonish their MPs (Labour, Tory and SNPs) for being so gullible as to take on my “fake news”.

The opposition PN is not precisely my fan base either. I’m told this website is more closely monitored than Glenn Bedingfield’s and likelier to raise all manner of fluttering and quacking when some buttons are pressed.

I’m not expecting any of the people working on either team to send drinks over to my table when they see me in a restaurant. I was never the sort chasing that sort of flattery, and there’s nothing I can miss that’ll stop happening to me now.

Frankly, it must mean that though I do make mistakes — who doesn’t? — some things I’m getting right. There are more than enough loons out there for the powerful to ignore. If I got their attention, if they’re wondering what’s coming up next, if they resent the research and reporting here being helpful for other investigators and researchers, then this is useful.

The sad thing is so many of these people seem to think politics is an exercise in networking and in making personal contacts which they call “friendships” when it’s hard to imagine they have any understanding of the term.

In my book, politics is a public service and government is a force for good. The person doing the serving is their last consideration. Their friends just as low in the ranking. That’s how it should be.

Instead, a network of mutual back-scratchers appears to have taken over the political firmament, and they are so smug in their reciprocal access that they make it a point to taunt those of us outside it. They think someone like me has their face against the shop window wishing to be allowed in. Because they judge everyone by their measure and think everyone has their desires.

If you do not want to be ‘in’, then you are ‘holier than thou’, hypocrites or the new line, extremists who cannot conceive of friendships across political parties.

This is not about having a monthly pizza with someone who votes for the other party but with whom you share a passion for clay pigeon shooting. That would be normal.

But what we’re seeing is a cynical network built across party lines designed to make political alternation irrelevant to the power and influence these persons enjoy. Their ideological indifference or even programmatic ambivalence means they not only can be friends but must be friends to ensure that no matter who you vote for they are always on top.

What takes shape is a society, its existence overt, its motivation secret, that is a federation of the real power in the country. Political parties are colours for the foreground that keeps the pretence of normality and democratic life, but they have no real influence on policy and, more importantly for these apolitical people, on the power they can exert and the money they can extract.

Here’s Vincent Galea having lunch with Roseanne Cutajar, easily the most vicious fire-breathing dragon on the Labour Party backbench. 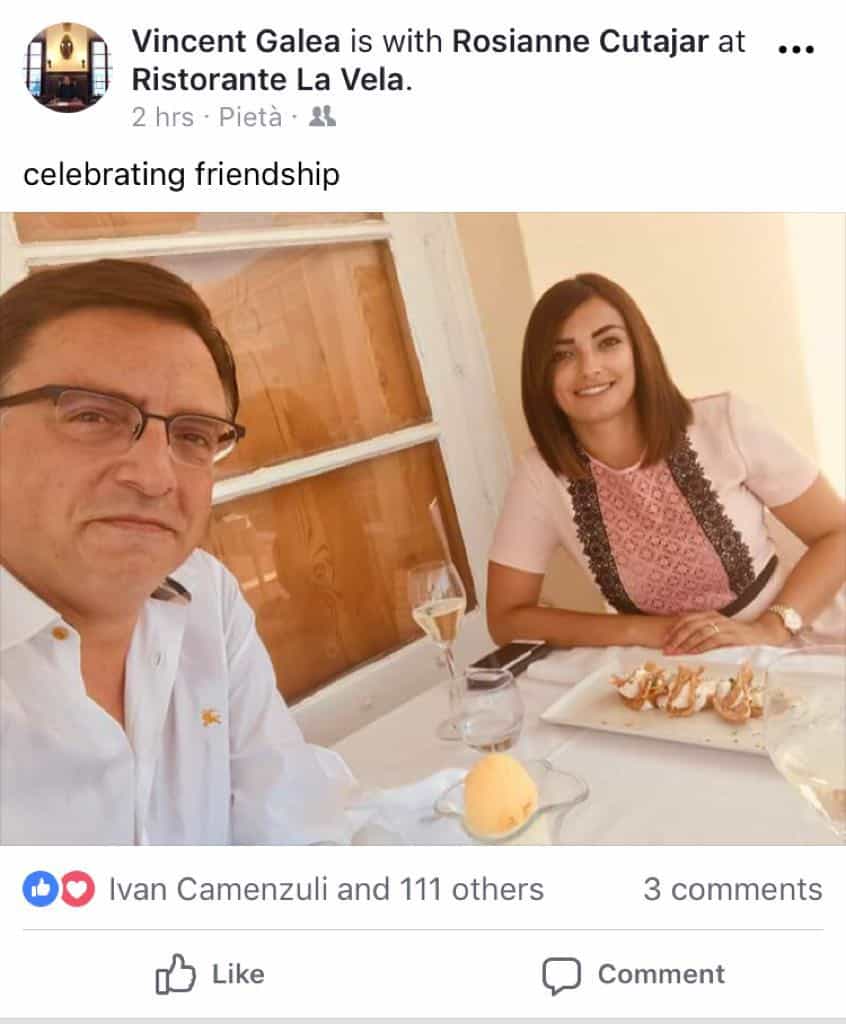 Just two days ago she was screeching on Twitter that she would have cleaned out the Daphne Caruana Galizia protest site in Valletta because that is how government and its MPs deal with objectors.

Instead of affixing posters I would have cleared everything. It’s about time. The ruthless mastermind behind the Egrant fabrication doesn’t deserve being commemorated on a national monument. #Malta @IndependentMlt @Europarl_EN pic.twitter.com/Fsbuuqq4bc

Hours later he was at this party with Hermann Schiavone and Adrian Delia still sporting what must pass for a smile and transparently comment that the pose is intended to provoke a reaction from someone like me who is, exceptionally they must imagine, disgusted by this.

Not to miss an opportunity to remind each other of their fabulous exclusive eligibility to the cheerleader high-school bullies girls club, Robert Musumeci and Nickie Vella de Fremaux all pitch into twitter and blow air kisses to each other. 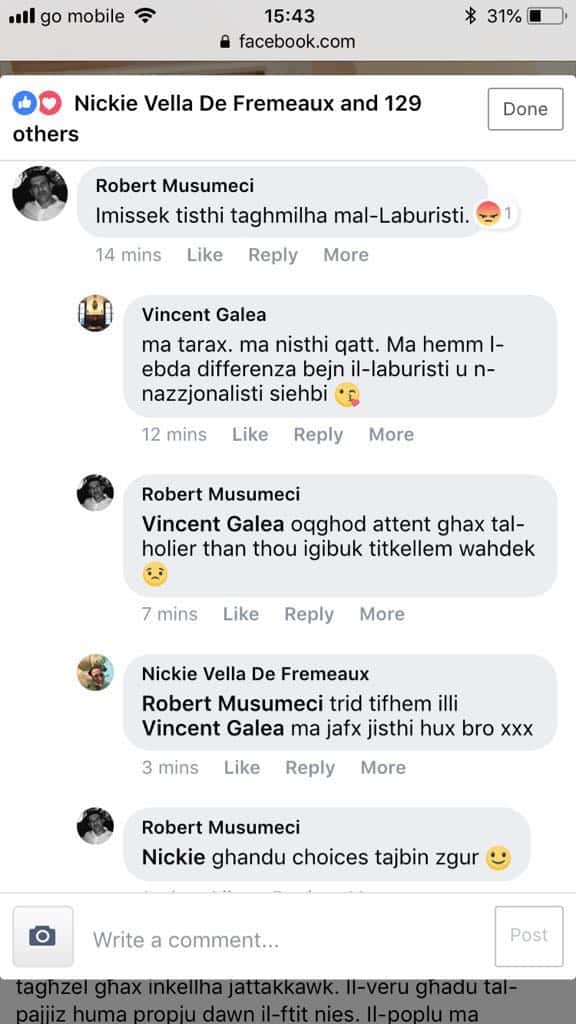 Fine, they think they’ve won, and they think they’re immortal. That’s not the worst bit. The worst bit is all those PN supporters who against their own better judgement bend over backwards to justify this. This is not the monthly pizza scenario with the Laburist who like you shares a hobby.

By all means, don’t like me for telling you this. But for your sake and the sake of your children stop to think why some people are always Mr Popular.