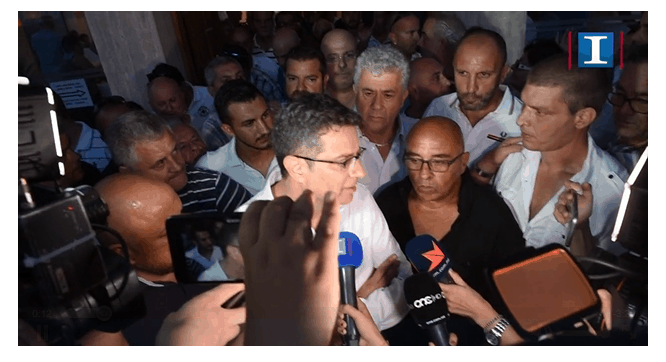 There are many things you can take from that conversation. I’ll focus on one. Louis Galea confronts the last word in defence of Adrian Delia’s rule against all basic common sense and crushes it: it does not matter that he was “elett mit-tesserati”. As a method to choose a party leader, going out to the mass of members who in their great bulk are spectators in the process rather than participants is a divisive and unhelpful way to do things.

Newsbook reported yesterday that one of Louis Galea’s first initiatives was to rein in the thugs who go on line to bash around anyone with an opinion they feel is not entirely consistent with the dogma of Adrian Delia’s divine right to rule. That too is a ramming blow on the vestiges of authority the current leader of the PN has. In times of crisis — and there have been many — these bullies were the people Adrian Delia turned to for support.

Time and again they have proven to be a loud minority, happy to mock, threaten, and bully people who gave their entire lives to the PN and they have done so in the apparent conviction that they are legitimised by Adrian Delia’s election by the suffrage of party members.

They recall the exhortation of their leader when he was campaigning for the seat he now occupies screaming at no one in particular “give us our party back”. Since then there has been a feverish fear of counter-revolution; a horror that the PN’s ancien regime could come back to take away the leader that they chose.

In this frenzy a reign of terror took hold. Louis Galea speaks of restoring serenity. He was being diplomatic. Much more than serenity was lost over this time. What needs restoring is sanity.

Inevitably for people for whom love of party is sincere and profound an unhealthy bout of optimism has set in. Louis Galea’s ability to fit in the role contrasts so dramatically with Adrian Delia’s unsuitability that people who felt nothing but despair in the last several months get drunk on the physical reincarnation of all they’ve been nostalgic for.

But for being altogether unjustified that optimism is extremely dangerous. More dangerous even than the bullying, the intimidation and the threat of violence party loyalists have had to face on a daily basis. More dangerous because it creates a false sense of security, an illusion of normality, a deceptive environment of calm.

I’ll try to illustrate this. If you ask any consistent PN voter what the best thing they can think of Alfred Sant is, the response would be unanimous. The moment he stepped in as party leader in the early 1990s he did what many thought was impossible: he looked the bullies that had hovered around the likes of Wistin Abela and Lorry Sant for many years in the eyes and told them to walk away.

What’s more he managed. The received wisdom until then was that the Labour Party could not exist without the gun-toting, metal plumbing wielding bullies bearing bisyllabic nick names that have gone down in legend: il-Qattus and it-Toto’ and il-Qaħbu and so on.

The Nationalists’ most comforting maxim until the onset of Alfred Sant was that “tal-lejber ma jinbidlux”: political violence was an intrinsic element of their very make up. This, of course, in contrast with the PN that has no history of violence except in Labour’s moral equivalency effort of misrepresenting the PN’s occasional refusal to turn the other cheek.

Why am I recalling this from a quarter of a century ago?

Because what the victims of the intimidation campaign conducted on behalf of the PN leader over the last several months are actually celebrating right now is the news that some rough and tough thugs are being told now to stay away from the PN headquarters.

What is sickening is that fear of reprisal and the risk of physical harm have been taken for granted to the extent that if a lid is put on that risk, that’s seen as good news.

The environment of calm serenity that Louis Galea wants to bring back will work like an opiate if all it brings about is a cheerful acceptance of the status quo. It is no better to drive oneself off a cliff if you pop a pill and down half a bottle of something to replace fear with exhilaration. The impact at the bottom of the cliff will be no less terminal if you were merely half conscious on the way down.

No doubt it is not a bad thing if PN Councillors flock into the General Council at the end of this month without fear of violence — spoken, written or thrown at them. But that’s no reason to feel gratitude for the absence of that violence.

Under the cold light of day the question PN Councillors are being asked remains unchanged: is Adrian Delia a suitable leader of the party?

He isn’t. The reasons have not gone away. The fact that one can think this without fear of reprisal does not change anything in the facts themselves.

One final point. In creating an atmosphere of serene reflection, Louis Galea is addressing one very important fear that Councillors had when deciding whether to speak their mind and say Adrian Delia should shoulder responsibility. What happens if he leaves? Will we have another vacuum in which to spin and makes things worse?

General Councillors must remember who inflicted the fear in the first place; who recruited the thugs; who organised the online trolls; who created the fake profiles; who coordinated with the Labour Party media; who brought about the division. Just because there may be a reprieve does not mean the person responsible can get away with it. If he does, this will happen again.

In case you were starting to have any doubt, Adrian Delia is responsible.