Granted that for political parties to work you need some form of a chain of command. If everyone says what they’re thinking at the moment and shoots from the hip, if there’s no coherence and no coordination, a party is no longer worthy of that name: it becomes chaos.

But political parties are not armies. Coercion is not the way you bring everyone in line. The authors of the petition filed yesterday at the PN HQ, almost certainly written by people within PN HQ, clearly don’t understand this. The petition calls on “appropriate action” against people whose expressed views are inconsistent with the diktat of central command. If this was an army, that’s fair enough. But it isn’t. It cannot be.

The only way to manage disagreement is to incorporate it. Where there is a proper space for dialogue, persuasion and inclusion people will “pull on the same rope,” to use a cliche recalled by the petition.

That requires a relationship between the leaders and the led. Loyalty is not one way in a political party. Neither are respect, solidarity, support through good times and bad. It needs to work both ways.

Leaders who expect loyalty from their team must be loyal to their team.

This too is something the PN leadership — the present one — has never understood.

Consider for example this exchange on the Whatsapp group of the PN’s women’s branch. 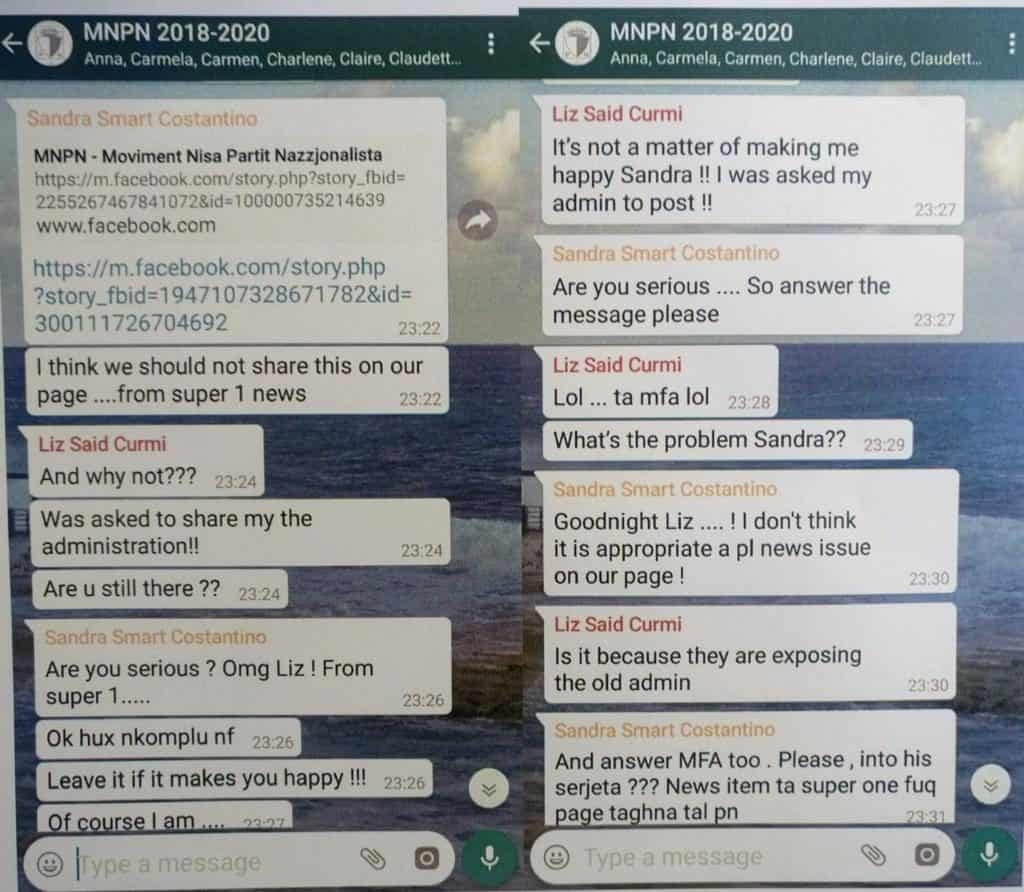 One member of the group challenges the manager of the MNPN’s Facebook page for publishing a post on the Facebook page from a Labour Party news story criticising Occupy Justice activists. The post is no longer online.

The context is not the present. It was early January and the PN leadership was facing one of its many crises when information Adrian Delia’s wife had just accused him in court for abusing her and their children had just come out. The Labour media, ever keen to shelter Adrian Delia from his internal troubles, hit out with some diversionary stories saying that civil society activism was the work of the party’s old leadership — Simon Busuttil — intended to undermine the PN’s new leadership, Adrian Delia.

What Labour’s media do is their business. But when the story is carried on the official website of a branch of the PN, the PN adopts that line as if it was its own.

This WhatsApp conversation shows a member of the MNPN saying she disagreed this happened. The Facebook page manager did not justify publishing the story attacking Simon Busuttil and Occupy Justice by saying it was factually correct and therefore deserving of publication. No one ever thinks anything on One TV about Simon Busuttil or Occupy Justice could ever be factually correct.

The justification was the classic Nuremberg defence: Befehl ist Befehl. An order is an order.

The One TV story attacking the former Leader of the PN for his fictitious association with civil society activists as if this would have been a bad thing was published on the MNPN’s Facebook site on the orders of party central.

Of course, they did. But their sense of party coherence would have never allowed them to use party structures and party media to open fire on a component within their own party in this manner.

How rotten is that?

Previous:UPDATED: Returning to his government job … to concentrate on his district.
Next:Quaestor