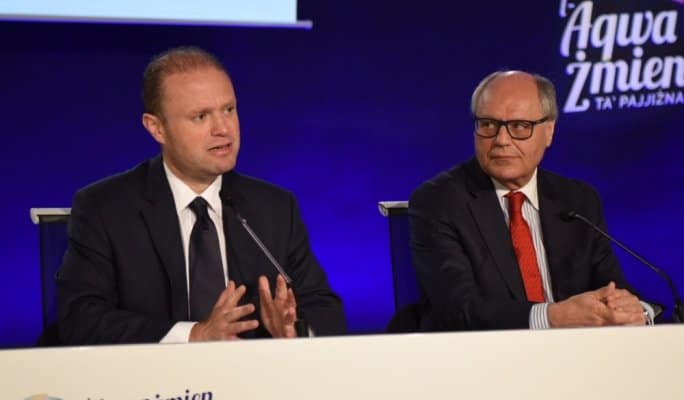 Because that’s the only way to call it. He was being interviewed by Times of Malta and he rubbished calls – led by the PN – for a cut in energy tariffs to ease the pressure on families and businesses hurt by the coronavirus slow down or shut down.

There have been calls for a cut in electricity tariffs. Is this even possible with the fixed-term contract signed with Electrogas?

It is not just the government’s company [Enemalta]. You also have the Chinese now. It is not ours to say, OK, let’s lower this or increase that.

That is where criticism of government decisions to sell such vital assets such as power stations and hospitals comes in. When a crisis like this comes about, that is when you really need these State assets…

It doesn’t mean that just because the price goes down, the price of fuel goes down with it.

There’s so much wrong with this it is an effort thinking were to begin.

First the facts so that we understand where we are.

This chart shows oil market prices since 1946. Look at the bright red line so that you can account for the change in the value of money. The black line is the actual price oil was traded at. The red line adjusts that price for inflation which is why as time goes by the black and red lines get closer till they merge in the present. 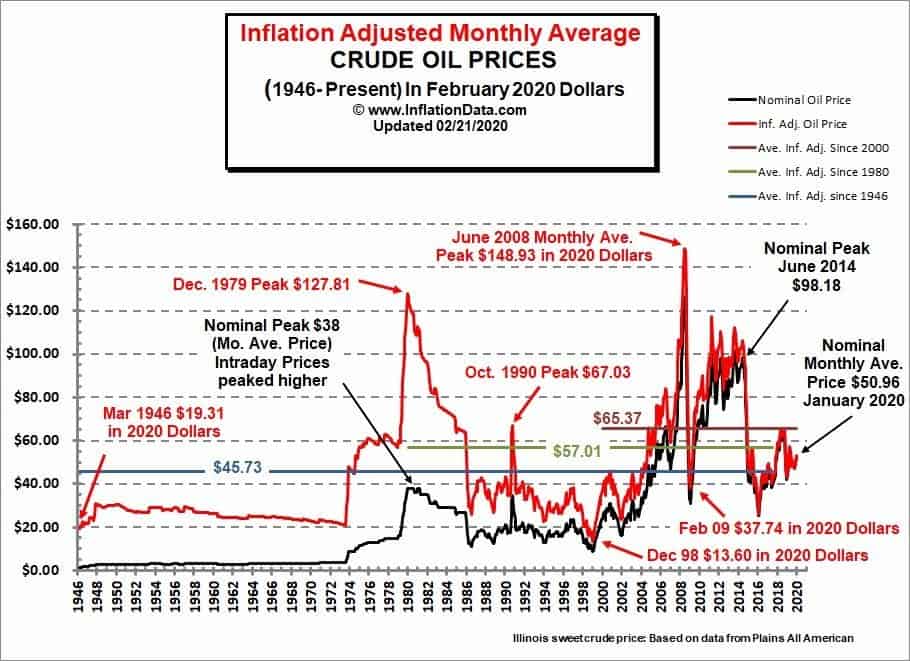 Since January 2020, the price has gone further down from the $51 showing at the end of this graph. We’re now at $20, around the price we had in 2002, and an eightfold reduction on prices compared with the price of oil during the 2008 financial crisis. 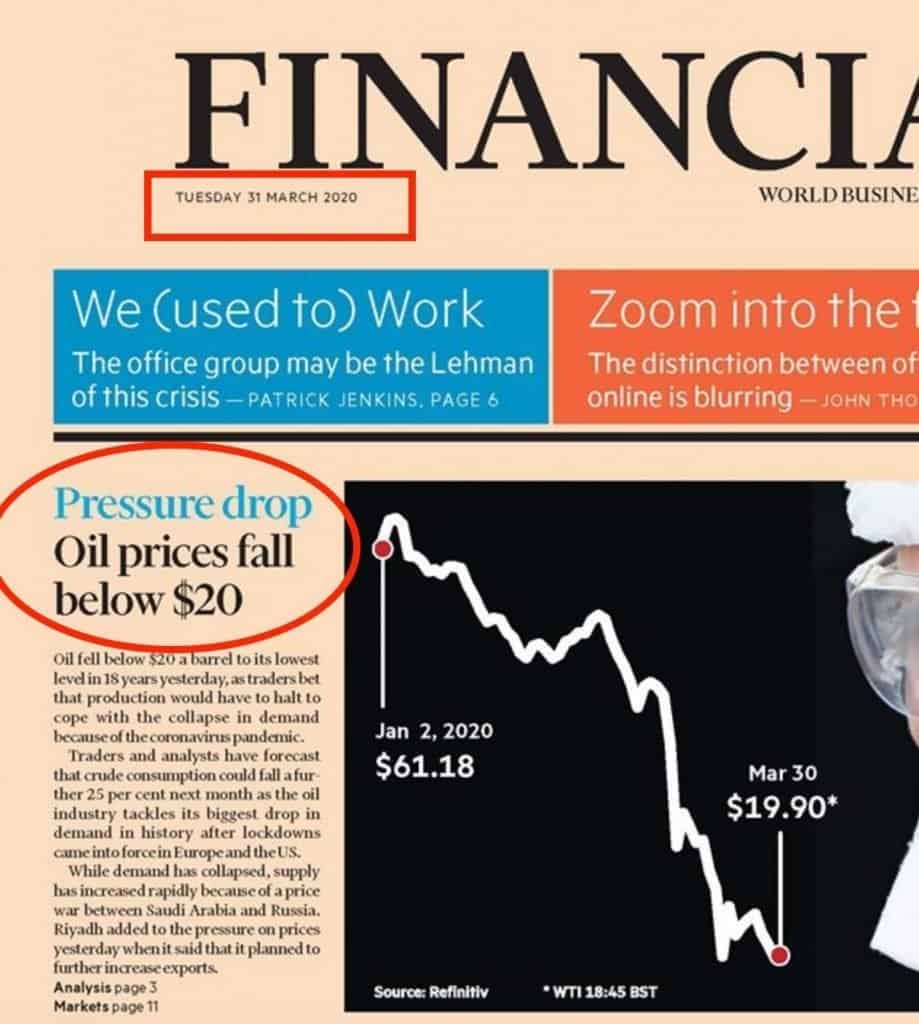 Before 2013 Enemalta supplied most of its electricity generated from oil. It doesn’t anymore. So, we need to look at natural gas which is used at the Electrogas power station. The patterns are similar. If anything, the price drop compared with the 2008 financial crisis is even more pronounced with a tenfold drop in the cost of the raw material. 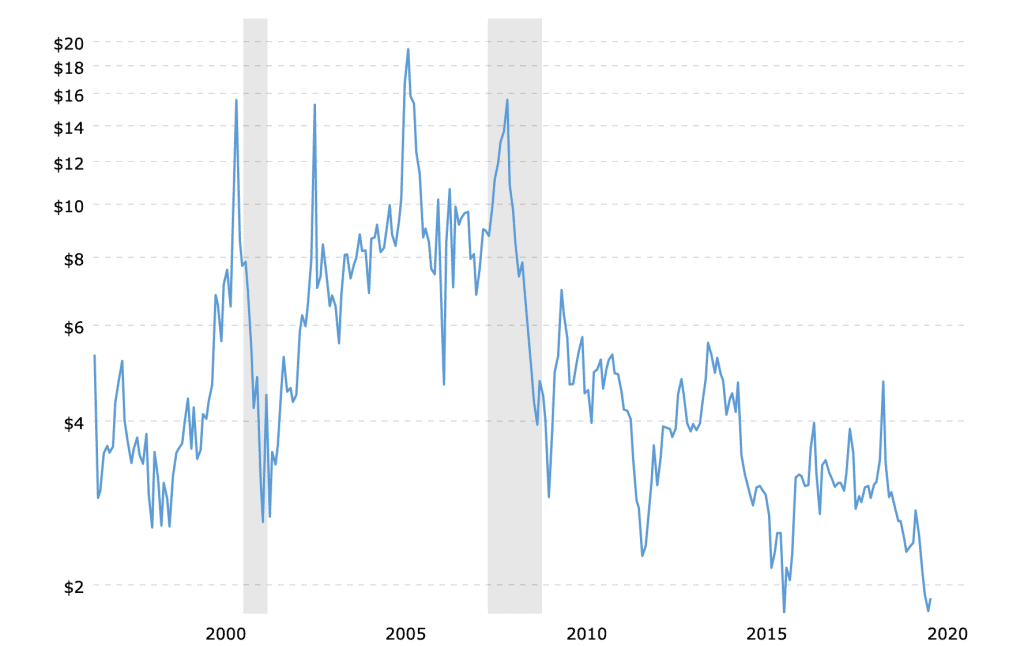 So that’s where we are.

Now let’s talk about how we got here.

Joseph Muscat came to head the Labour Party around the time of the 2008 financial crisis. He recruited Konrad Mizzi and, in the years leading to the 2013 election they promoted energy as their flagship policy focusing their campaigning on providing solutions that had they been in place in 2008 would have avoided the painful increase in the cost of electricity for Maltese consumers. 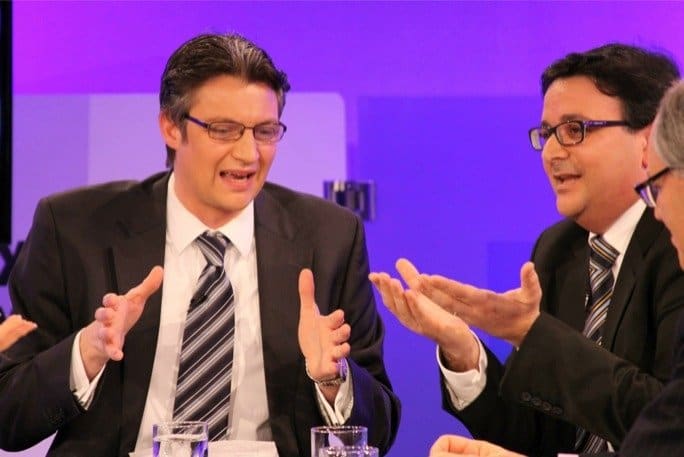 Remember this? Shame on you, he said. Many times.

The highlights of their energy policy were as follows:

What did they do?

What did they not do?

They did not dilute Enemalta’s status as an energy monopoly supplier.

OK, now that you’ve remembered all this, here’s the present situation from our point of view.

The cost of fuel is about 70 to 80% of the cost base of a power business. If that cost shrinks eightfold or tenfold, the margin between its costs and its revenues increases by the same ratio. Under normal market circumstances the pressure to compete would force energy suppliers to reduce their consumer prices rebalancing their margins to adjust to the drop in their raw material cost.

Naturally this would not happen overnight. As the graphs show there is a volatility in the market price and though the raw material price can shift from one day to the next you cannot do that with retail prices. But of course, no energy supplier procures fuel on a daily basis. A combination of purchasing options and financial instruments provided by banks allows them to exploit market trends, including, of course, a general reduction in prices.

In a competitive market an energy supplier will want to make sure they do not paint themselves into a corner by locking themselves into prices in the long term that their competitors can beat with smarter buying.

Joseph Muscat’s government locked us into an 18-year deal with Electrogas fixed at prices that from its very first year in operation were remarkably higher than what the market could provide us with. The international prices for gas now are barely a third of what they were when that deal was made.

Anywhere else the market would force Electrogas and Enemalta to find a solution. Because some competitor would just be undercutting them given all the fat lining the stomachs of these two state-owned energy companies.

But that cannot happen here. There is no competitor. So Enemalta and Electrogas – for which read the governments of Malta, China and Azerbaijan and the private owners of Electrogas – are enjoying super-profits on the back of businesses closed down because of coronavirus and on the back of families belonging to people who used to work for those businesses.

But is it true Edward Scicluna is helpless? That’s where the bullshit comes in.

Even in a competitive environment electricity is a regulated market. The grounds for regulation in a monopoly environment are even higher. The government should intervene to ensure that Enemalta (and Electrogas) do not abuse their monopolistic position to secure super-profits while the population whose only alternative is to use oil lamps and bush fires is forced to buy from them at any price they choose.

Declaring himself helpless Edward Scicluna continues to give these profiteers (remember Electrogas is completely privately owned) a freehand in exploiting local consumers.

Even if for the sake of argument Edward Scicluna might find he is somehow legally inhibited from doing this because of some insanely unfavourable contractual commitment his own ministry approved when negotiating with the Enemalta buyers and with Electrogas, as finance minister he can still intervene to reduce the cost of utilities.

A simple way, which has been used before to ease hardship for segments of the population, is to pay utility allowances directly to consumers to help them pay their bills. Therefore, instead of halving the bill, the government pays half of it when it is issued. Some of that expense comes back to the government in the profits made by its holding in Enemalta. The rest, yes, lines the pockets of the governments and the people we gave our energy infrastructure to.

It is bullshit to argue that the government cannot help with the price of electricity – which is totally disproportionate with the cost of generating it. If they don’t want to help with that they should have the self-respect of saying so.

Previous:Robert Abela’s positioning
Next:Repubblika: Our campaign for judicial independence is starting to pay off