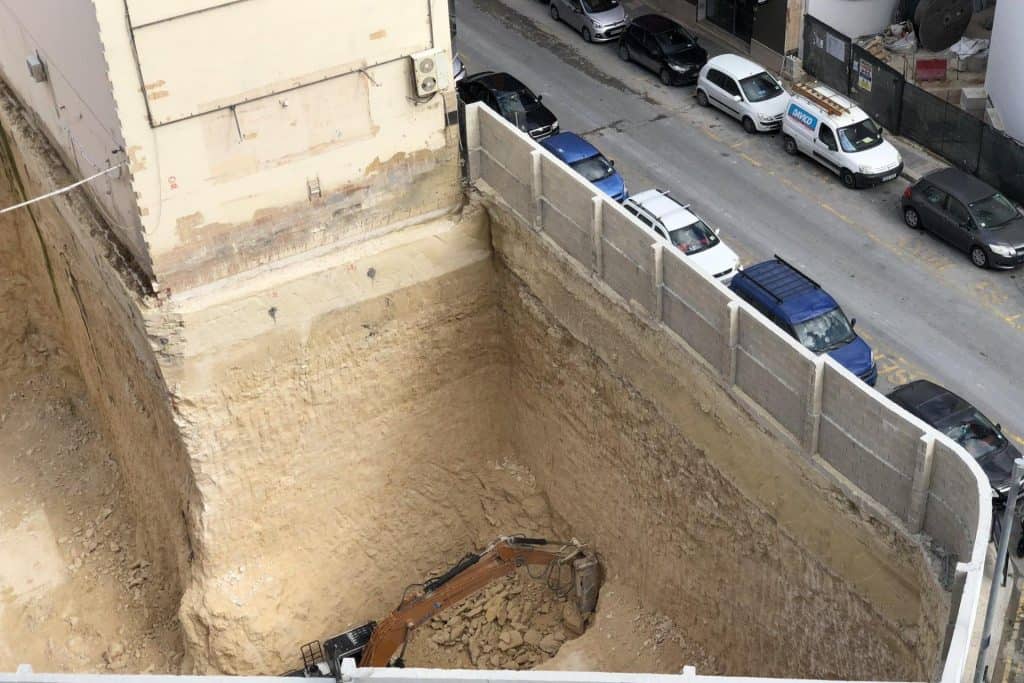 The photo of EC Malta flooding the media this week was, to put it mildly, shocking. I lived and worked in Malta for 12 years. For 9 of those, I taught English at EC Malta. The horror of that photo, with EC seemingly perched on the knife-edge of collapse, starkly sums up how far Malta has (quite literally) sunk.

When I first moved to Malta in 2008, the euro had just been introduced and EU flags were everywhere. I began working in a small language school shortly after. Two things struck me immediately. First was discovering that teachers weren’t paid during their breaks. We photocopied and planned classes while munching a sandwich yet we weren’t being paid. Coming from a university job in Scotland, this was, for me, Dickensian.

Second, I had to replace teachers regularly due to sickness. I laughed at the time and asked if Malta was one big hospital. It didn’t take me 12 years to discover that it was and is. And it’s getting sicker by the day.

When I first started teaching at EC in March 2010, you could easily see it, resplendent with its bright orange flags. Its 2 (then) tall buildings also created a wind tunnel and more and more dust swept into your face as the years rolled by. By the time I left last October, you could barely see EC amongst the carnage of construction with its vice-like grip on the school in which hundreds of staff and students moved  in and out its doors.

Opposite EC was the rise and rise of Pender Gardens. Work also busily began on apartments, although the desire to sunbathe on a street-facing balcony is beyond me. A few years ago while I was teaching, a loud crash interrupted the lesson. A quick glance out the window revealed a large pane of glass shattered on the road below. Miraculously nobody was injured. Had the accident happened 10 minutes later, lunch-break would have seen the street awash with students, and, no doubt, with blood.

Life moved on and so did the building work. Soon the highly controversial Paceville Tower began to rear its ugly head. I used to respect the Iraqi architect, Zaha Hadid, for her remarkable achievements as a female, but walking past her name every day alongside that of Joseph Portelli, well known for abusing regulations as he builds his government-backed empire, reduced my admiration.

As an outspoken activist in the campaign for justice for Daphne Caruana Galizia, many of my lessons revolved around the theme of corruption, readily understood by the many Brazilians and Colombians in the class. The recent increase in the number of Venezuelan students suggests they envisaged Malta as a form of escape.

For the few who struggled with the meaning of corruption, a handy ready-made visual prompt was placed outside our window in the shape of the Paceville Tower. EC, like everything in Malta, is encircled by corruption. Attempting to maintain its solid reputation as one of Malta’s biggest language schools, its foundations have been eroded by a government that steals money from its citizens whether through Panama accounts, money-laundering deals with invisible companies, air-brushing details from lists given to foreign film companies, or cementing business premises over in an early grave.

This grave became a brutal actuality this week when Miriam Pace was killed in what should have been her ultimate place of safety: her own home. The demolition site adjacent to her house was given its certificate of safety by an architect who had shares in the company responsible for the project. Miriam’s house collapsed with Miriam brutally trapped inside. It doesn’t get worse and yet in Malta, it always does and it always will as long as the criminal organisation in control of this country isn’t forcibly arrested and placed in jail. There is no alternative. We’re not talking about a change of prime minister or a different election result. It’s much more serious than this because, as we know, Malta is not a normal country so normal procedures for effecting change simply don’t work. We need a full-scale overhaul of every corner and crevice of this filthy island  to try and rinse away the blood and grime that sticks, so abhorrently, to its skin.

But let’s stick, for the moment, with EC.

A year ago, while I was working in the school, we were informed at a staff meeting that in a couple of months, work was going to begin on drilling a 7-storey underground car park. For me, it was the final straw that broke this camel’s back. I sold my flat in construction-riddled Gzira that same weekend. I moved back to Glasgow permanently last December. I embraced that call to fuck off back to my own country and am grateful that I could.

Not everybody, however, has this opportunity, including my friends and former colleagues at EC. Interacting with people from all over the world, EC staff are open to all kinds of illnesses purely by being in contact with so many others in the average day. This contact takes place in confined spaces where air-conditioning further circulates any lurking germs. At a time when the coronavirus has seen a pre-war style rush on Malta’s supermarkets, teachers are on the frontline with little, if any, defence. Masks are an obvious impediment to the development of linguistic skills.

The global outbreak of an illness can probably not be foreseen, although again, I remember teaching in a small language school in 2009. Spanish flu had just hit the headlines and shouts of ‘Holá’ filled the air as I squeezed my way upstairs.

Apparently, EC staff have been provided with continuous updates about coronavirus while working in a building that was physically shaking due to the construction work next door. It’s that childhood game, isn’t it, when you’re faced with the choice of how you’d like to die.

Last year, buildings collapsed and a woman later died in hospital. Because of her age and the time delay, her death wasn’t attributed to the gaping lack of regulations this government has introduced in its lethal deregulation of the construction industry whereby the traffic police joined in with bribes to turn a blind eye to illegalities. You want a festa of fucked-upness? I give you Malta. 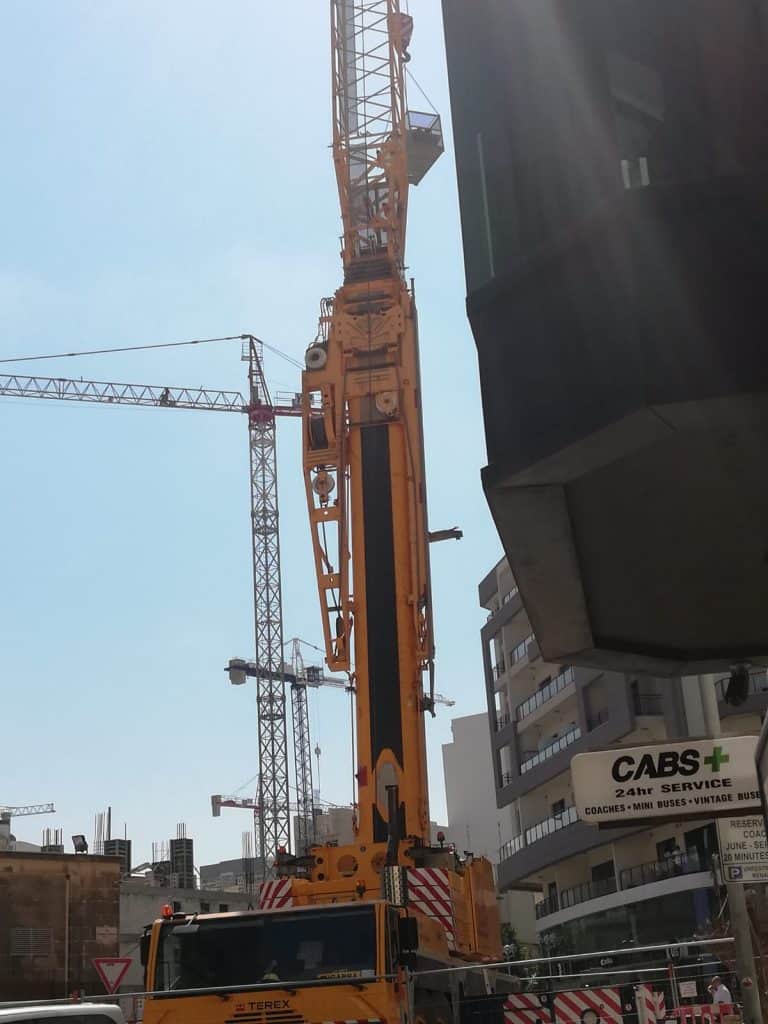 But one of the most disturbing aspects of all this is the predictability involved. Last year, following the collapse of apartments, the saintly Joseph Muscat called a halt to construction work. It was like witnessing an truce at a time of war. The deadly machines lay idle and a hush descended on the drilling.

Those brief and halcyon days didn’t last long though as the King of Organised Crime and Corruption swung his sledgehammers with a vengeance, smashing through new laws as fake and flimsy as everything else he pretends to put in place to protect us. And Miriam Pace was killed because of this. There was nothing to protect her. Not even her home.

Yesterday, EC announced it was moving staff from the building we were gaping on in horror. Until yesterday, staff remained in a workplace where, according to witnesses, sometimes the entire building shook. All classes took place in the opposite building so students were spared the possibility of being inside a building which may, like Miriam Pace’s home, have crumbled beneath them. Staff, however, were left to face this threat.

The people who work at EC are, in my experience, good people but, like all employees, their job is to obey orders, no matter the risk this entails. The parallel with the Nazis is all too obvious but isn’t justified here.

The Labour Party by its very name is there to represent the workers. We know, and have known for a long time, that this is a lie. Those who are on the frontline – whether they be journalists or film makers or shop assistants or teachers or card-carrying members of the Laburisti GWU – are those which this criminal organisation masquerading as a government has placed under threat. The orders they give and gleefully ignore does bear some comparison with fascist Germany because the end result is lethal. Corruption kills in every single way.

EC is a private language school, part of that entrepreneurial spirit which those such as Muscat would pretend to support. It needs students to survive. It needs teachers to teach them. It needs to maintain its reputation amongst fierce competition. It needs to keep its doors open whatever the perils in doing so.

And the perils are very real and very dangerous. We saw them in that photo yesterday. I saw them a year ago and the fact I’m now in Glasgow is further testament to that.

The news that ‘experts’ are being called in is of little consolation. An ‘expert’ judgement condemned Miriam Pace to death. After all, when there’s a crime, you call the police, except in Malta, they’re under arrest for fraud.

As always with corruption, it’s the little guy that loses, the guy who’s trying to keep his house and home together in a time of war. It’s the ECs of the world who are trying to sustain a business which creates jobs for people to feed themselves and their families. And it’s the corrupt, who can be named and who have faces, who laugh as these endeavours inevitably collapse. Min ħexa mexa as they say.

Previous:Tomorrow we go back to digging
Next:Evarist Bartolo to Tim Sebastian: “I didn’t stand up for my principles”