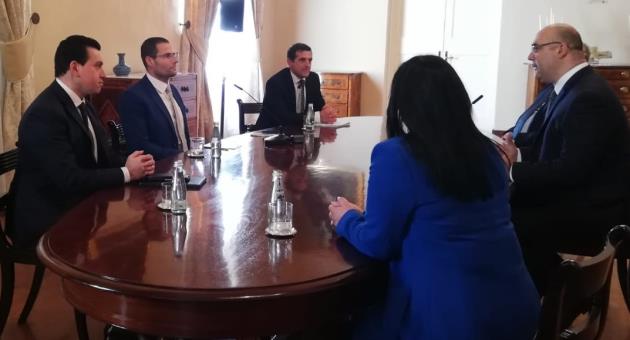 In an earlier piece I wrote on why I think Robert Abela shows he does not have what it takes to manage the present crisis. He’s showing signs of being just as inadequate for what comes later.

Consider the statement he made after meeting the construction lobby yesterday. “Construction industry has to elevate the country from this crisis,” screamed TVM.

Now keep in mind that while many economic sectors are frozen or rapidly grinding to full stop, construction is largely unaffected by the current crisis. No projects have been ordered to stop, physical distancing on construction sites is, apparently, not required and works proceed if anything more efficiently with less traffic jams in between locations slowing equipment and materials down.

While there’s too little barbering going on, or advertising, or catering, or partying, or fresh-vegetable purchasing, or tourist guiding, or coach driving, or cinema going, there’s plenty of constructing. Some would say too much.

Robert Abela yesterday asked the construction industry to get ready for the calm before the present storm that is shutting everyone but them indoors. Construction is, says Robert Abela, going to be the foundation of our economic recovery after the present crisis.

There’s so much which is wrong with that idea I hardly know where to begin. But it’s my job to try.

Firstly, I think we’re stretching the metaphorical analogy with the last great war to hit this country a bit too much now. Coronavirus is ravaging and all that but one thing it does not do is knock down buildings. So, whatever happens over the next weeks and months we will not have to spend the next 80 years debating whether to rebuild the opera house.

This only means that any construction that will be happening after the crisis will be exactly like the construction we had during it and before it: i.e. the reconstruction of sites that have been intentionally knocked down, the intensification of urban space transforming gardens and open spaces into concrete platforms for fletsijiet, and the encroachment on areas previously reserved for no or very specific development.

That’s bad news all round.

Secondly, one of the major challenges we’re going to have for a while after the coronavirus crisis subsides is excess capacity. It is reasonable to expect travel and tourism to take some time to return to pre-corona levels. That’s because it is unreasonable to expect everyone to rush to their local airport the moment they are first allowed to go to the neighbourhood pub. Fear of travel will persist for a while and people will need time to recover from the economic hardship they are presently suffering before they feel they can afford to go on holiday.

So, if we’re turning to the construction industry to build hotels or tourist facilities we’re probably neglecting the existing resources we have and missing an opportunity to repurpose their use and redefine their roles in our economy.

Thirdly, if the construction industry has not been impacted by the current crisis then it is reasonable to assume that it is currently working at capacity. That’s because it is also reasonable to assume that before the crisis hit developers were seeking to maximise the use of their assets. This means that if the construction industry is going to have a larger economic role after the crisis than it has now that it’s practically the only industry working at full steam, we are going to have to bring in more machinery, more cranes, allow more cement processing plants, more inert waste dumping and more extraction to supply an even busier rate of activity.

There was a time when the Labour Party thought 50 18-metre articulated buses carrying 180 bus passengers each were a national catastrophe. But Robert Abela looks forward to more cranes like that is what we need.

Fourthly, if the government is telling the construction lobby to get ready for more activity, it must also be getting ready to deregulate the sector further. Because whatever husk of a planning framework that still exists, it is the only limiting factor that keeps the construction industry where it is and not at the boosted levels Robert Abela asked of it yesterday.

That means even less restriction on outside zone development, lower aesthetic and conversation standards, and in spite of the fact that the crisis is forcing us to pine after the last remaining urban open spaces Malta post-corona will see more of its open spaces choked up by construction.

And fifthly, a bit like the do-re-mi song in Sound of Music, we are linked back to the first reason. If we not only continue the horror of over-construction in this country but shift the gear to a higher speed, the few who will start to travel will have even less reason to consider Malta as their destination. We continue to behave as if there are no other options.

It would have been more reassuring if we knew Robert Abela was meeting airlines to discuss their needs in order to start operating in earnest as soon as possible. If we knew he was speaking to gaming and IT employers on an individual basis to ensure none of them are forced to shut down or relocate away from Malta. If we knew he was intervening to ensure that engineering manufacturers have a smooth supply chain and line of export even as airlines ground their fleets. If we knew he was engaging with farmers and local food producers to make sure all their local produce is purchased and distributed in spite of the breakdown in the conventional distribution channels.

It would have been more reassuring if we understood the state of play at banks and insurance providers. If we understood the state of health of our energy supply and how the government can extricate itself from a deal that is forcing us to pay for the next 16 years rates for our energy that were barely acceptable before the corona crisis but are absurd during it and who knows how they will impact our competitiveness in the brave new world that follows it.

Is this too complicated for Robert Abela? Does his Bob the Builder imagination stop at building blocks and concrete mixers?

Robert Abela may not a wartime don. But that doesn’t make us look forward to his return as a peace time boss either.

Previous:GUEST POST: The message is not getting through
Next:THE SUNDAY TIMES: The right to be informed