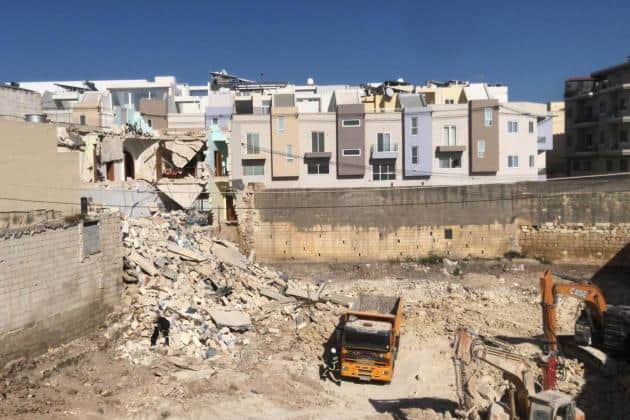 While the search goes on for a woman likely to be under the rubble of a collapsed building, it is wise to exercise restraint on commentary. There will be time for comments. Except perhaps one that need not wait.

This building did not collapse because of some natural disaster we could not prepare ourselves for. Nor did it happen at a time of war. Nor was it unpredictable since incidents like this under identical circumstances have happened several times over the last few years.

The short line to causality links the collapse of the building to the excavation works next door. That is how comments emerge immediately about the greed of digging too deep whilst allowing people to have their lives crushed under the rubble. None of this is unreasonable of course.

And that is how the developers’ union can manage the situation by suspending its member who was developing the project that appears to have caused the incident. They called it in a statement today “the first ethical step”.

Be that as it may. It is clear that developers cannot regulate themselves. It is not necessarily because they are particularly bloody minded, work-focused, greedy and uncompromising. These cartoon representations that pop out of mediaeval morality plays are not helpful at all.

It is not enough for the association of developers to punish one of its own.

The prevention of these incidents can only occur if there is proper regulation: independent, backed by and built on law, and enforced.

The longer, deeper, truer line of causality that starts back from today’s incident takes us to the fact that we have done away with the notorious “sikkatura” of proper planning and building rules and policies, safety standards, frequent inspections and proper application of penalties.

In order to apply these, planning must take its course and that means a longer period between planning application and permit granting. It requires frequent inspections during works which means more expensive permits to pay for the cost of supervision.

They used to call that inefficiency or hostility to business. So, we knocked down the floodgates and gave everyone a free for all. And now we rely on MDA to penalise someone whose pistol fired as he played Russian roulette with the temporal lobe of an innocent neighbour.

Like the killing of Daphne Caruana Galizia, the storage of stolen fuel from Libya in Maltese oil tankers, the millions ransacked by crooks from the national health budget, the arrest of most of our traffic policemen after they cheated us for years and the arrests and indictments of people who bought Maltese passports to cover their crimes, the collapse of buildings next door to building sites now likely with people inside is not just the responsibility of the people who pulled the trigger.

These are failures of the state to do its job of enacting laws to keep us safe and to implement them and enforce them so that we can rest easy that bar an earthquake or an insane invasion from some tin pot who took over Tunisia by force the roof we sleep under stays where it is.

That woman is under the rubble because our government failed to protect her. And no one seems willing to do anything about this.

I sound like a broken record some times. But this too requires an independent and public inquiry. We are either going to start asking the right questions to get closer to the answers that we need or people will continue to die.

Previous:GUEST POST: From Vitals to Steward: analysis of a transition.
Next:Ali Sadr to face trial from today