David Casa walked out of the court building this morning relatively unscathed. He’s not wearing the handcuffs Manuel Mallia believes he deserves. Yet.

People wonder how nothing sticks to Joseph Muscat. It’s because he uses henchmen to deliver the biting quotes and scandalous actions. He got a Valletta councillor to try to destroy the Republic Street memorial to Daphne Caruana Galizia and when that didn’t work got other foot-soldiers to put photos of his spiteful hero Dom Mintoff to try to get a reaction he could exploit.

He sent employees to harass Daphne’s family hoping to get some angry footage to emphasise his message of her demonization by sublimating it through their reactions.

He got the planning regulator to wake up briefly from its perpetual slumber to fall like a ton of bricks on an operator who dared accept bookings for posters carrying messages of protest against him.

He got an army of trolls to harass, intimidate, bully and stifle the views of any opposition: starting with Neville Gafà, Rosianne Cutajar and Robert Musumeci who have the dubious decency to troll under their name and assume responsibility for what they say, and extending to anonymous trolls who up the ante and hide. 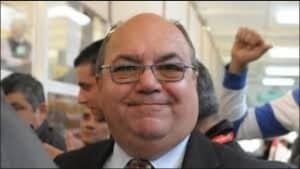 And yesterday he got one of his ex-ministers to speak for him and throw a last ditch attempt at scaring David Casa from filing his copy of a suppressed FIAU investigation with a court magistrate.

David Casa has warned for weeks that he was in possession of this report that, he said, contains evidence that should land Konrad Mizzi in a cold cell. A question no one asked him this morning was whether the police ever knocked on his door and asked him if he would be willing to collaborate in an investigation into the information he said he possessed.

That is what you would expect if this was a normal country. Not here.

The simple fact that he was ignored by the police when publicly stating he possessed evidence of a crime, proves David Casa and all those protesting against impunity absolutely right.

It’s not like David Casa went to court today out of the blue, without warning and without saying what he meant to do there. Far from it. And yet, the police did not even deign to give him a ring.

I want you to try to understand what I’m saying here. Please. Too many do not.

If I were to go on radio and announce I have information that can prove a Mr Joe Anybody murdered his wife anyone would expect the police to call me in and ask me what I know. That is simple common sense. That is what the police are for.

And that is precisely what did not happen here every day since David Casa announced he had information on crimes that carry decades of prison as a penalty attached to them.

Instead Joseph Muscat got Manuel Mallia, right up to yesterday, to threaten David Casa with prison if he collaborated with the institutions of the state in their investigations into these crimes.

Malta: where everything is upside down. Officially.

Borrowing from Chris Hedges. We live with a prime minister who wants our doctors to destroy health, our lawyers to destroy justice, our universities to destroy knowledge, our press to destroy information, our police to destroy freedom, our religions to destroy morals, and our banks to destroy the economy.

Previous:Envy of the world? Not quite.
Next:The world is watching