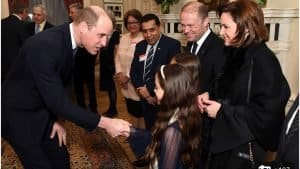 When I saw pictures of the Muscat children at the Commonwealth meeting in London I thought what most people did. The argument has been made so many times before. They missed school again because they went on a work trip with daddy. Other parents get fined for just the same thing. There are laws that forbid this and they’re not useless laws.

Then there was the uncomfortable sight of the children in an event reserved for adults. It wasn’t like taking the kids to see the Raymond Revue. No one would break protocol to point out to the parents the crass impoliteness of showing up for an adult event with children. Everyone would continue to smile politely allowing the Muscats to think there was nothing strange about the fact that theirs were the only children there. That’s how special they are. 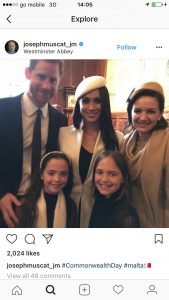 But really did not Mrs Muscat find it odd that while making polite conversation with her discussing his daughter’s interest in dancing, Prince William most pointedly did not have his children with him?

What is this? Mrs Muscat can’t find a baby sitter?

This happened a few days ago now and perhaps because of how touchy people get sometimes when you bring minors into the conversation I decided to pass on commenting on it. It’s not like the matter has not come up before and it has not helped the Muscats one little bit.

But then the Muscats did something that demanded comment. Not content with shoving their children in photo ops they should not even be in, they came back to Malta justifying their presence to no one in particular in a planted piece on Malta Today, the publication always happy to oblige paid-for content no matter how embarrassing.

Read this piece by Paul Cocks.

Here’s an extract so you get the general idea: “As Brexit edges closer and countries scramble to conclude favourable deals with the UK, Prime Minister Joseph Muscat’s two young daughters could end up being Malta’s aces in the hole because of what they have in common with one particular member of Britain’s royal family.”

Picture the scene. Michelle Muscat pushes her daughter in front of her to greet Prince William. “They dance” she says prosaically. “My daughter likes dancing, too,” the prince, trained in polite conversation designed to go nowhere replies politely.

The author of the Malta Today report of this mind numblingly dull chit-chat that happens between strangers on the Sliema promenade everytime someone shows up with a new pram presumably expects anyone sober to suspend disbelief enough to think that this was international relations at work.

Someone in Castille seriously thinks that Soleil and Etoile Muscat are diplomatic tools the presence of whom serves some form of national interest.

Quite apart from the fact that Malta Today dispenses with any critical faculties when carrying this sort of iron curtain drivel as if these were its views.

Please think how far the delusions in the Muscat office minds have come. Whatever Michelle Muscat thinks her children are not royalty and though she behaves like a queen, her children will not inherit a throne.

Princess Charlotte Windsor was born great grand-daughter of the Queen of England. If she drinks enough gin for breakfast and is blessed with the notorious longevity of Victoria’s female heirs she will die a great-aunt of some Queen or King of England.

Soleil and Etoile Muscat have nothing in common with that antediluvian destiny. This is a republic. Their father is prime minister. At some point he won’t be anymore. Without going into the merits on how soon that should be, their parents should be reminding them every day, morning, noon and night, that their focus should be on their schooling, on getting ready for their exams, on the fact that no privilege will give them an advantage or influence over anyone else by some birtright, because they have none.

Instead they are taken to meet Prince George Windsor as if this was some debutantes’ ball for international royalty and a very small glass shoe had any chance of fitting one of their pretty little feet.

Of course Prince George was at nursery at the time learning his numbers.

Wait for it. Not one Labour troll complained Michelle and Joseph Muscat dragged their children to London to an event they were not meant to be at. Not one of them complained at a Malta Today story, obviously scripted in Castille, that explicitly described how the Muscat infants are being used – I emphasise that word – by the government to pursue diplomatic interests.

But this piece will be filed as an attakk faħxi u moqżież on the poor fillies.