Jason Micallef, the hobbit from the land so great they get gardeners to run their culture festivals, went ballistic again because a banner was hung on a bridge covering one of his two hundred ‘European Capital of Culture’ banners. Here’s his Facebook post from yesterday. 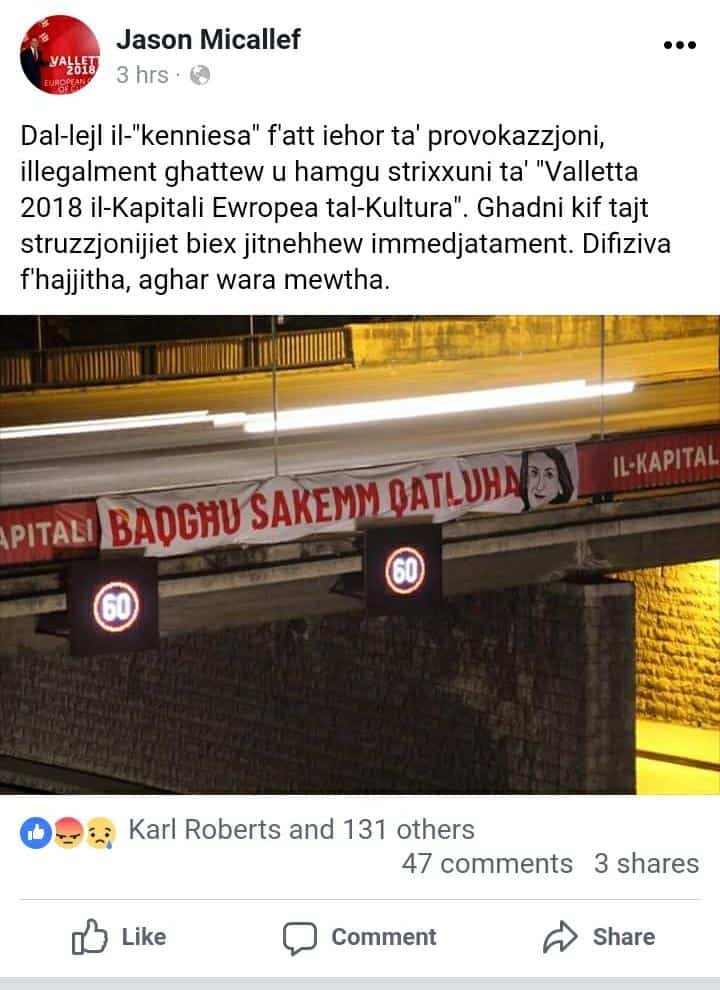 “Another act of provocation”. Once again Jason Micallef, provoking what? What, in your view, is a reaction you cannot help to a canvas banner?

“They covered and dirtied Capital of Culture Banners”.  His banners have been hanging in the elements for weeks. The banner he complained about was fresh off the press. He can’t mean “dirtied” literally. The only alternative is he should be translated as ‘sullied’ or ‘contaminated’.

“I have just issued instructions for their immediate removal”. Shudder. Behold a little man display his borrowed power. Unlike the volunteers who go out at night, spending their own money to hang their protest banners, Jason Micallef breaks his sweat picking up the phone and approving an excess payment to his contractor. Impressive.

This one takes the biscuit. “Divisive in life, more so after her death”. The Chairman of Malta’s Capital of Culture Festival can make his own apologies for being utterly unable to write properly in Maltese. I have glossed that mess over in the translation.

Let’s limit this to the psychology, shall we? Jason Micallef’s small, paranoid mind saw Daphne Caruana Galizia as a looming giant, a bit like the stern school mistress of his naughty, self-conscious kindergarten days. In terms of the gap in intellectual capabilities the comparison is reasonable.

Except that Daphne Caruana Galizia had more serious things to think about than Jason Micallef and Jason Micallef has little room in his lonely psyche for much more than Daphne Caruana Galizia. In this post of yesterday he actually lets slip that he thinks that she is still there seeking to make his life miserable. Saviour Balzan should have asked him to testify along with Jeffrey Pullicino Orlando, Jesmond Mugliett and John Dalli and he would have completed the cuckoo’s nest.

I am not in the habit of disputing people’s preference to believe in an afterlife. But I draw the line at public officials complaining about poltergeists.

No, Jason Micallef, Daphne Caruana Galizia did not put that banner up. She’s been dead 5 months. So when you put this other after-the-fact post, the victory you won on her was only in your delusional mind. 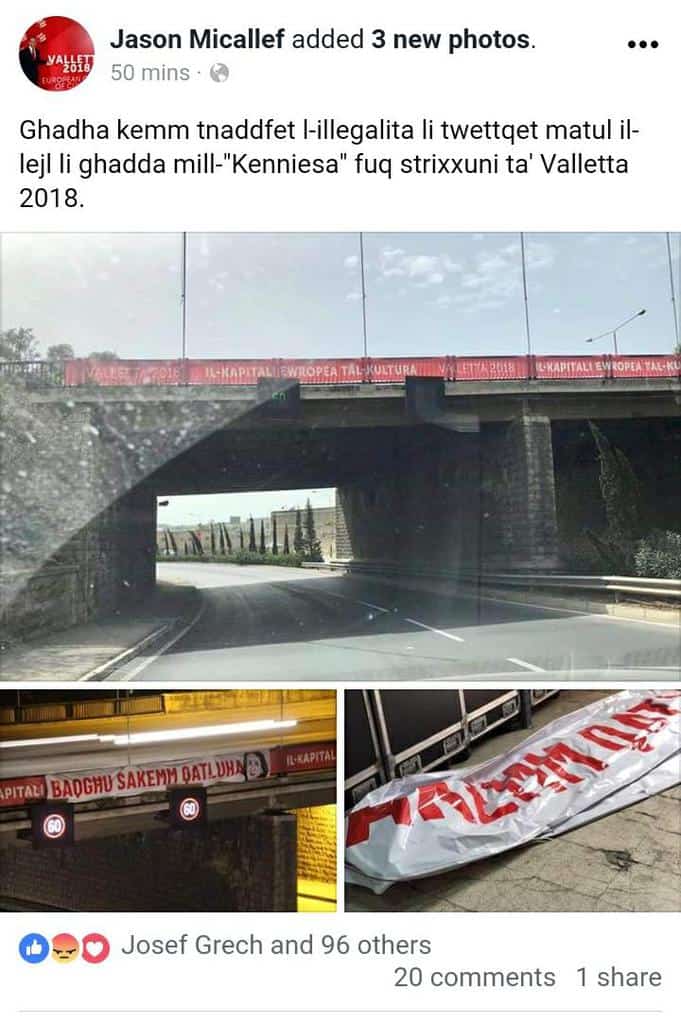 The banner was removed, yes. But here’s some news for you Jason Micallef. You need to watch your road when you’re driving. You never know where you’ll find another fresh provocation to sully your precious banners.