Greek media are reporting the press conference yesterday by civil society organisations appealing to the Greek government to do the extremely unlikely and intervene to prevent the forced extradition of Maria Efimova to Malta.

Interestingly Protagon goes on to describe the scene just over a week ago when Maria Efimova handed herself in. At an Athens police station, Maria Efimova provided her details and told police officers that there should be “something against me”. She was led to the prosecutor of Ephesus, who ordered her custody and later transferred to Korydallos prison.

She is still there now waiting for a hearing on Malta’s request for her extradition.

Cyprus Business Mail confirmed yesterday an earlier story it reported that Cyprus’s request for Maria Efimova’s extradition for alleged misappropriation there reported last December but supposed to have occurred four years ago was rejected by Interpol.

The extradition request appeared to have been an effort to smoke Maria Efimova out of hiding. She was however not in Cyprus at the time as her hunters must have assumed, but in Crete.

At yesterday’s press conference by civil society organisations, activists where heckled by Brian Hansford who before yesterday has not attended a press conference in years. The state-funded propagandist has for weeks been campaigning to discredit Maria Efimova and has promoted fake news about her including recently that she is “implicated” in the attempted murder of the Skiprals in Salisbury, England.

His behaviour, words and actions are more confirmation of the prejudicial environment Maria Efimova would find herself in when she is dragged back to Malta. Her persecution on charges drawn up on the back of complaints by Ali Sadr are intended to ensure that one of the main witnesses of what was going on inside Pilatus Bank is not believed and the crimes perpetrated in there are absolved by effective impunity.

The photograph with this post is by Darrin Zammit Lupi. 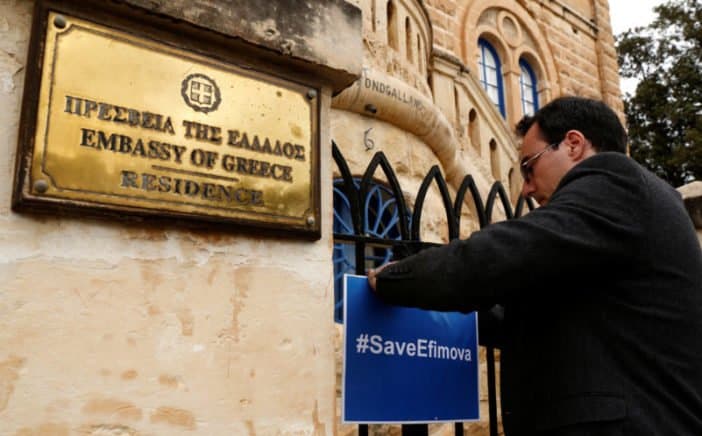 A man attaches a placard to the fence of the Greek Embassy as civil society activists call on the Greek government to grant political asylum to Maria Efimova, a Pilatus Bank employee who ignited a political scandal in Malta when she became a source for investigative journalist Daphne Caruana Galizia who was murdered last year, in Ta’ Xbiex, Malta March 27, 2018. REUTERS/Darrin Zammit Lupi

Previous:I was in London yesterday morning, and I visited Pilatus Bank
Next:Kaelin’s game