If you’ve been reading The Guardian and The Observer about the whistle-blower from Cambridge Analytica you must be disturbed by the complete callousness of the billionaires who have been able to apply technology to swing majorities in the most sophisticated democracies in the world to accept and clamour for fabrications and untruths.

The casual manner with which Joseph Muscat’s entourage flip lies over truths is familiar and therefore ever less shocking. It should not be.

On Friday night we had news of arrests in connection with a failed car bombing several months ago. The retweeted excitement of the prime minister suggested the government was about to make a meal of this and this was going to be rather bigger than the usual ‘thank you to our law enforcement agents’.

Even before I had seen the Malta Today report, an anonymous tweeter was challenging Ivan Camilleri of Times of Malta and me for ‘ignoring’ this news. That tweet has since been deleted. Quite apart from the fact that in my case I’m a one man show and can’t be relied upon for instant news of arrests, I had not yet heard of the arrests, let alone that one of the arrested was a sibling of a politician.

There was no way of confirming the story through any official communication. The police had said nothing. Not to me anyway. They obviously briefed Castille and Castille briefed Malta Today.

I waited for confirmation of the story and a wise thing that was. Malta Today apologised for reporting the wrong brother of an MP was arrested. Castille gave them the wrong name. Clearly this information was not reliable.

I waited for the next morning. Glenn Bedingfield was now criticising me (and others) for bias because I had not yet had “multiple orgasms” over the arrest of a PN MP’s brother. I don’t know what this guy gets off of but I appreciate his interest.

The arraignments came and the arrested brother of Therese Comodini Cachia was let go by the police and not arraigned. Obviously I have no idea if the man has or has not done anything wrong. All I know is the police doesn’t think it has anything it can accuse him of.

I let the matter pass without comment. The police need to be able to speak to whoever they think might provide them information that can get them to prosecute crime. If they need to arrest someone while something is checked out or to extract knowledge within legal means, they should be able to resort to all the tools the law allows them. And siblings of politicians – and politicians themselves – should expect no exceptions.

Of course when the police do not accuse someone in a court of law the matter rests there, until and unless the police change their minds.

What I find truly unbelievable, absolutely incredible, utterly revolting and disgusting is that the line started by an anonymous twitterer working at Castille and continued by Glenn Bedingfield while there was still a chance an MP’s brother would be arraigned, was continued by the principal government spoken after the MP’s brother was sent home.

Kurt Farrugia tweeted his shock at my (and other’s) hypocrisy for not criticising (nay, eviscerating) Therese Comodini Cachia because her brother was NOT accused of involvement in crime. Not only does Kurt Farrugia expect me to ignore presumption of innocence as he does, he also expects me to presume guilt by association with someone who is not accused of any wrongdoing.

See, Keith, rule of law works. Had this man been a relative of someone even remotely close to a govt official or PL and not charged you would have been first to cry foul claiming collapse of rule of law. Had he been close to govt or PL, he would have been instantly guilty. https://t.co/n0UJzciOt0

This sort of perverse thinking is so utterly illogical, so warped, so opposite to basic sense, that it is an act of cynical counter-culture. It is an untruth, a fake reality, a lie packaged for public consumption because it is pronounced by an official government source and then replicated on the party’s media and pushed through the paid trolls.

Understand what we have here. Castille tried to embarrass Therese Comodini Cachia by leaking to friendly press information on the arrest of one of her brothers. They put pressure on independent press to repeat the story to give it a veneer of truth. When it turned out that it had none – which they could very well have known in advance – they proceed to spin the failure to report something that did not happen as the reason why it did not happen.

For Kurt Farrugia, Therese Comodini Cachia is politically undamaged not because her brother was not accused of a crime, but because people like me did not lie and said he was.

And this lie of too many piled up negatives will now be pushed to the loyal masses as the truth.

We have had truth and reality taken from us. And we’re left in a world where Jason Micallef can be master of ceremonies of our national culture and argue that people drunk on Guinness on St Patrick’s Day are happy Daphne Caruana Galizia died. 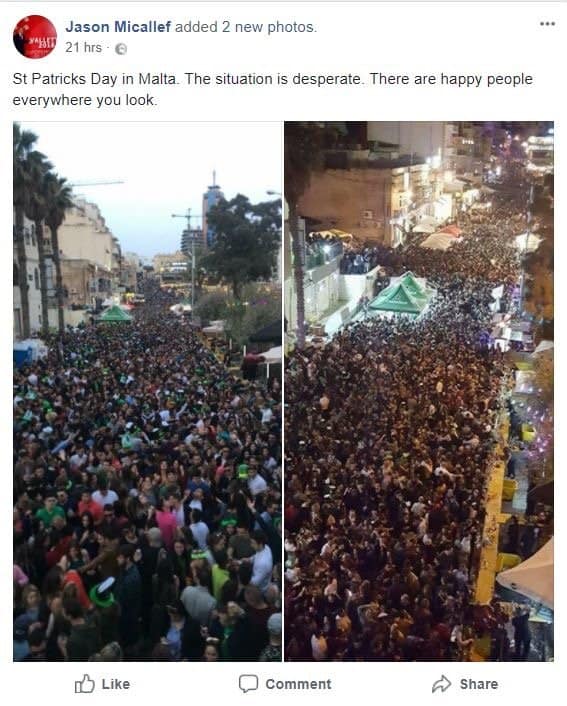 They are literally getting away with murder.

Previous:The Cambridge Analytica story
Next:Go on then, get a life