I don’t know what to expect from The Daphne Project. Starting today we will hear stories developed from the work of Daphne Caruana Galizia, cut short too soon.

I do know what to expect from Joseph Muscat and his army. There will be lies, diversions, retorts, and baseless equivalencies. They don’t need to counter facts with facts. They never have, they’re not going to start now. It’s enough to discredit the authors, get enough coverage in the TV media here and give their people a narrative, however absurd, to stick to.

It’s like those debates on Climate Change you get on TV. They find a loon wearing a white jacket who is prepared to say he “does not believe” in Climate Change, as if that’s a matter of faith one can opt out of. And his ‘arguments’ are presented as balancing out the informed opinion of the entire world-wide scientific community.

We’ll now have Super 1 on the one side (aided and abetted by TVM) and The New York Times, Die Zeit, Direkt, France 2, La Repubblica, Le Monde, NDR, Radio France, Reuters, Sueddeutsche Zeitung, Tages Anzeiger, WDR and the Times of Malta on the other. And the two sides will be presented as equivalent.

And it will get even uglier.

Look at Glenn Bedingfield last night pushing the mantra that the murder of Daphne Caruana Galizia cannot be solved because the police don’t have her laptop. He taunts civil society activists for not handing it over.

What the outrageous hell is he on about?

This laptop worm, designed to enter people’s brains and shake their zombified owners to toss to Joseph Muscat’s tune, is one of the lowest logical atrocities Labour has ever committed. What are they suggesting? Because the list of options is not that long.

Firstly, they are suggesting Daphne Caruana Galizia hid the laptop and then proceeded to engage hit-men to blow her up.

Alternatively, they are suggesting her family engaged hit-men to blow her up and proceeded to hide the laptop containing evidence of this.

Finally, they are suggesting the family know from the laptop who engaged the hit-men to blow Daphne Caruana Galizia up but would rather not have that truth emerge.

All Joseph Muscat is interested in is that enough people even think any of this is even possible: to accept that Daphne Caruana Galizia’s presumed inhumanity, so inculcated in their minds from years of vicious Labour slander can be extended to her family of sub-humans.

Like those who argue loud enough that climate change does not exist or that the earth is flat and was created at 7 o’clock in the morning on a sunny March day in 4004 BC.

To legitimise this painful absurdity they back it up with action that mirrors the fallacious argumentation, playing games they can win at because they run a no longer so subtle dictatorship.

Here’s Glenn Bedingfield writing yesterday. “Maybe we will start seeing some banners asking ‘Where is that laptop?’”

And hey presto we do. 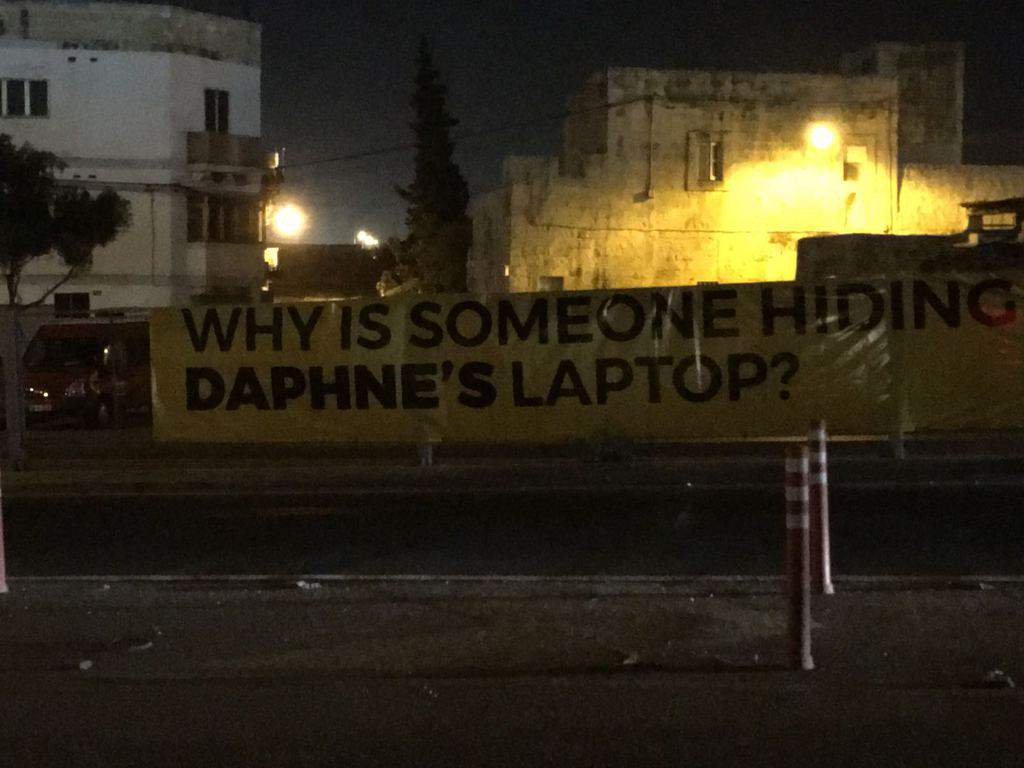 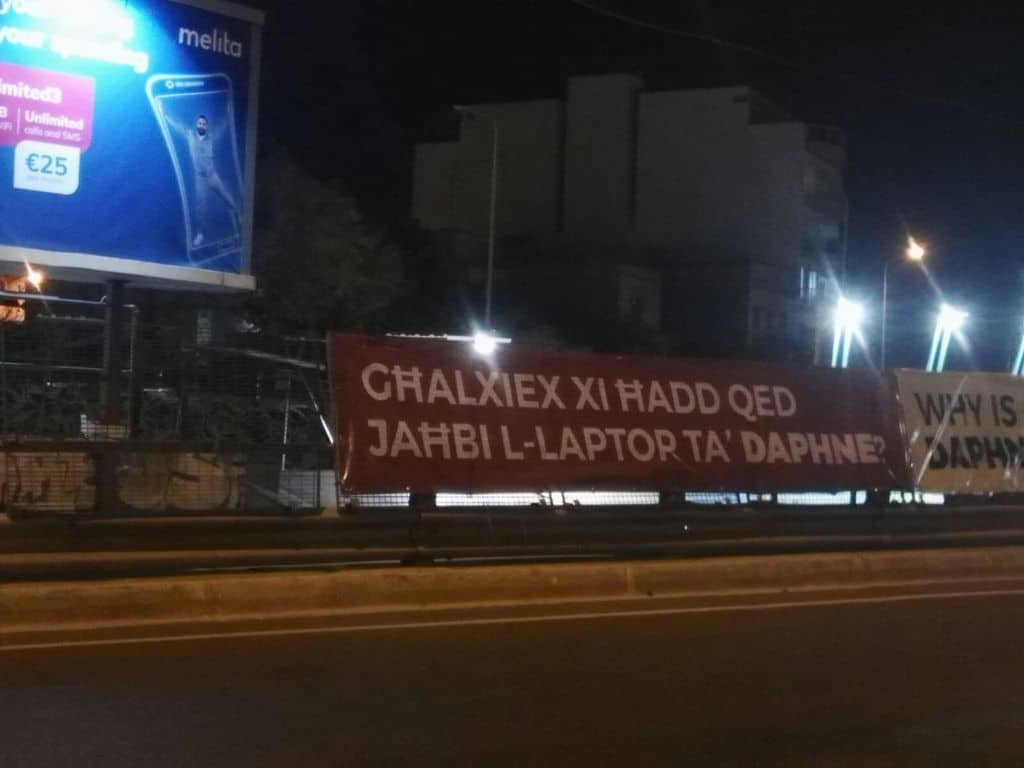 What yesterday were illegalities that needed to be struck down the moment they were put up –banners challenging government to do their job — has now become a tool of oppression.

What yesterday Jason Micallef described as a ‘provocation’ the government promptly fell for by using all its force to strike them off, stepping beyond the law in doing so, is now a challenge to someone angry to go remove the banners they put up. And then ‘You see! You see! You’re only interested in your own freedom of speech!”

When obviously the whole point is that the government here can say what it likes but everyone else will find the full force of the law to muzzle them.

Because, Joseph Muscat reminds us, it does not matter what The New York Times or Die Zeit will say about him. There’s an alternative reality here in Malta where he controls all information.

It does not matter what protesters say on their banners. Those will be removed swiftly by the police and replaced by Labour Party banners blaming the victim for her own death.

I don’t know what the world’s newspapers will be publishing starting today. But I know what Joseph Muscat will do. He is not going to roll over and play dead. He is going to fight for his survival. He will throw everything he has and it will be ugly.