Kurt Farrugia does not get much cause to celebrate these days. The response of the Ambassadors’ Club at the Council of Europe to questions from a Dutch MP sitting in the Parliamentary Assembly gave him some sort of platform.

It’s not that hard to understand how this works. An Opposition MP in the Maltese Parliament asks a question of a Minister about alleged misbehaviour of another. The answering Minister says he sees nothing wrong. That does not close the matter: at least not outside the narrow procedure. The significance is not in the answer as much as in the question.

If the governments of 46 European countries, including Turkey, Russia, Hungary and Moldova to name a few, brought themselves to criticise a 47th for rule of law violations, they’d be inviting the same attention on themselves. They just would not do that.

It is like Scotland expecting Spain or Italy to agree with its pledge for independence when they are fighting to retain their own territorial integrity. Or like asking Spain to sympathise with the notion of an EU member state granting political asylum to a fugitive from another member state when it can’t wait to get its hands on Carlos Puigdemont.

This is why the founding fathers of European institutions sought to balance clubs of governments – which existed before the wars and ultimately brought them about – with parliamentary assemblies accountable only and directly to their constituencies.

The significance of the exchange in the Council of Europe was not the bullet-dodging answer the Ambassadors gave. They gave the answer that was expected of them: just the sort of safe answer that would spare them ‘what about you’ retorts from other governments in the future.

Joseph Muscat does it all the time. Can you imagine what he’d tell Turkey if it joined complaints about a journalist being killed here and nothing having been done about it? What about how many Turkey is responsible for? As if that has anything to do with anything.

Kurt Farrugia can ignore this but the significance of the Council of Europe exchange is that the request for international scrutiny of the conduct of investigations into what Daphne Caruana Galizia revealed and into what brought about her death had to be made. And that Malta refused it.

PACE “confident that the Maltese authorities will continue to make appropriate use of all the means and mechanisms in place both in the @CoE and at domestic level and in full respect with the fundamental values and standards of the Council of Europe.” No further measures taken. https://t.co/5idyWauyf2

And it’s not just the Dutch MP sitting in the Parliamentary Assembly. You have to take into account those 114 members of the assembly who expressed deep concern about the goings on in Malta. Joseph Muscat cannot turn to individual MPs with his whataboutisms, which is why they do not mind asking.

Which is why in the EU, the only institution that really took up the cause was the European Parliament while the others ran for cover avoiding to provoke Joseph Muscat into his classic tu quoque retorts.

But the heartache of mourning sons is only the foreground of what they say. The reality is that an opportunity has been missed again by our government to prove to the world what it claims: that the criticism it confronts is groundless.

When asked to comment by his 46 colleagues, the Maltese Ambassador, taking instructions from Joseph Muscat could just have easily have said, ‘look, we have nothing to hide. Why not send an observer to ask any questions they think they need to ask and confirm there’s nothing sinister happening in Malta?’ IF there were nothing to hide.

Instead they said the opposite. ‘Move on. There’s nothing to see here’.

Daphne Caruana Galizia was killed. Six months later we have no idea who commissioned her killing and it does not look like anybody is trying to find out. The stories she investigated have never been picked up by the state authorities and Joseph Muscat is personally appealing a court order to the police to investigate the Panama Papers.

That is just not right. But unless you step outside your comfort zone to say so, everyone will continue to be comfortable looking away.

And Kurt Farrugia can continue to celebrate his little pyrrhic victories. 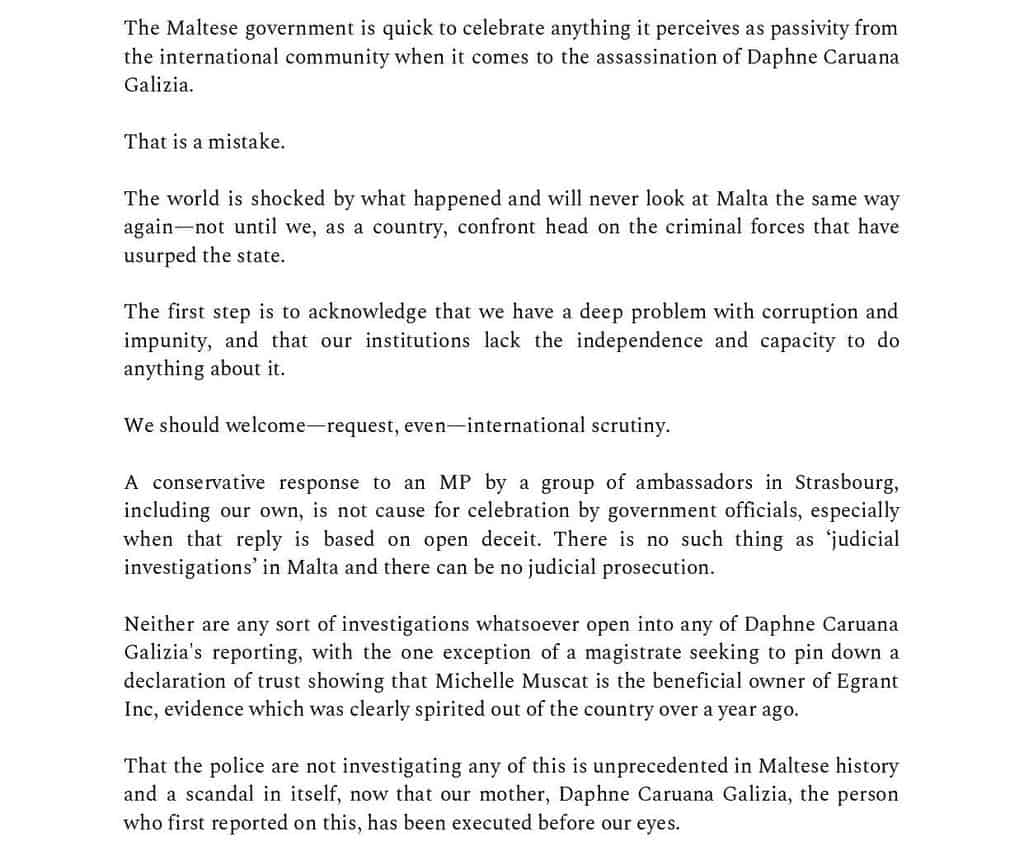