Looking for the way out

The significance of this Facebook post by Mark Camilleri should not be underestimated. It should not be overestimated either. It is not the lonely wail of a disposable switcher whom the Labour Party can replace by recruiting a dozen former PN voters persuading them to switch sides by some public sector job or planning permit. This objection comes from deep within the ranks of Labour Party support which remains loyal to the Labour Party come what may but has now publicly expressed distance from its current leadership.

And in that distinction lies the way out of the current morass.

The zero sum game with which our politics has always worked will get us nowhere in the foreseeable future. The way out of this execrable mess is not elections and a great white hope in the opposition party. It takes much more to start turning the page on this chapter than the mere alternation of party power.

We first need to go through the process of recognising what got us here. We need to re-examine the rules of the game and the consensus on which politics has been based.

The rhetoric of Mark Camilleri may be antediluvian and his prejudice against people like Simon Busuttil and Michael Briguglio may be grounded in partisan tribalism, but there is something that rings as sincere in his remarks.

I will resist the temptation to point out that the further evidence of intent, execution and covering up of crime by Konrad Mizzi and Keith Schembri simply confirms what Daphne Caruana Galizia and for a while the Nationalist Party put in the public domain for three years. This is no time for a smug ‘I told you so’ or even ‘she told you so’.

At this point it does not matter how long it took for Labour voters, supporters, activists and politicians to recognise that they’ve been had by Joseph Muscat and his gang. What really matters is that recognition has finally begun to set in.

It’s a sad sinking feeling that Daphne Caruana Galizia had to suffer such derision in the last months of her life and ultimately had to lose it before people like Mark Camilleri could start acknowledging what she was saying. But let’s not let that come in the way of hope.

Let’s acknowledge how difficult it must be for Labour Party officials, parliamentarians and supporters to admit to themselves and eventually to everyone else that it is time to acknowledge that their support for Joseph Muscat has brought shame to our country.

Let’s not for a moment think that by being smug about it we’re going to make it easier for anyone. It takes enormous courage for one to admit one’s been had.

Because you see, acknowledging that enough evidence has now been provided for action to be taken is a recognition that when less evidence was available the correctness and the veracity of the claims that were made was no less than it is now.

And that with the present credibility boost it is far less justified to continue to insist that there is not enough evidence to believe the claim that the prime minister himself received illicit payments through layered structures – in other words the Aliyev/Egrant/Michelle Muscat story that broke exactly a year ago today.

In the same way that revelations on Nationalist Ministers Ninu Zammit, Michael Falzon and John Dalli are shameful as far as they are concerned.

But a party’s eligibility to govern is its ability to address these issues as it becomes aware of them and its failure to prevent them is somehow mitigated by its action to excoriate them.

Defending corruption, hiding it, lying about it, weakening the institutions to prevent them from taking action on it: that’s another matter altogether. It is collusion; it is harbouring and sheltering crime.

When Joseph Muscat says he will consider Keith Schembri and Konrad Mizzi’s position after the inquiries are terminated he does not show he does not appreciate how clean politics should be: he demonstrates rather that he considers basic political decency as beneath him.

The revelations of two days ago showed Konrad Mizzi lied to Parliament about not having any connection to 17 Black. Lying to Parliament is not a criminal offence. No inquiry can recommend prosecution for such a thing. But in the Parliamentary tradition wherever democracy functions even misleading Parliament is a capital political offence that leads to automatic and inevitable resignation.

But really that’s a detail. Since 2008 Konrad Mizzi must have accumulated volumes of occasions where any other Minister in a democracy would have had to resign. He did not do so then, he’s not going to do it now.

And in all those times Joseph Muscat had to fire him in lieu of his Minister’s failure to resign. He did not do so then, he’s not going to do it now.

I look forward to stand alongside Mark Camilleri and others like him, with whom I probably disagree about just about everything, but with whom I share the simple desire that whoever runs the country does not rob it in the process.

But we can still stand together to demand the very basic desire that public service is truly what it says it is on the tin. That corruption, if found out, must be removed and punished. That the threshold of evidence to fire a government minister is not the same threshold for conviction and imprisonment. That covering up crime is as offensive as doing it.

Mark Camilleri may find me distasteful but I can imagine what he thinks of soi-disant neo-Labourites like John Dalli and Jeffrey Pullicino Orlando who crossed over to the Labour Party when they were pushed away from the Nationalist Party because they were found to be corrupt.

He must feel shame that his own party which he backed when it criticised corruption in the PN became the hospice for the rejects of the party he despises.

Shame is only for those who do nothing even when they realise they’re in the wrong. I only have admiration for those who stand up to stay no when everyone about them cowers in fear. 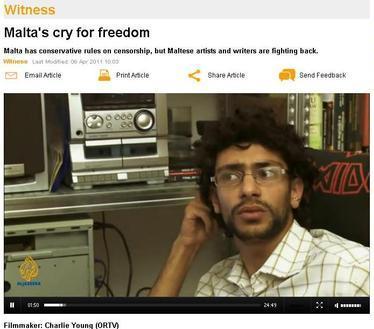 Previous:I know it doesn’t feel that way, but this is real.
Next:The impunity must end