There was never much hope. Just a fool’s hope.

The excuse that the SLAPP amendments are contrary to EU law is complete bollocks. Even if they wanted to stretch the argument about carrying decisions across EU borders what stopped them from preventing a SLAPP in Arizona like the one that rotten bastard Ali Sadr smacked on Daphne Caruana Galizia so hard only her death could prevent her from being hurt by it?

And in any case PN MPs today provided compelling arguments why even the point about judgements within the EU is not quite correct.

Because they think their power is eternal. Because they will use that power to preserve themselves for that eternity. Because like Pharaos they bury their wives and their servants with them because only their own Pharaonic interests count.

Where are the amateur pornographers who marched down Republic Street to protect the right to publish rape-porn and deemed an internal inquiry by the University where the content was circulated an undue interference of free speech? I’m not saying they were wrong then, another life it seems where protests here where about the right to circulate rape-porn not the killing of journalists with impunity. They weren’t. 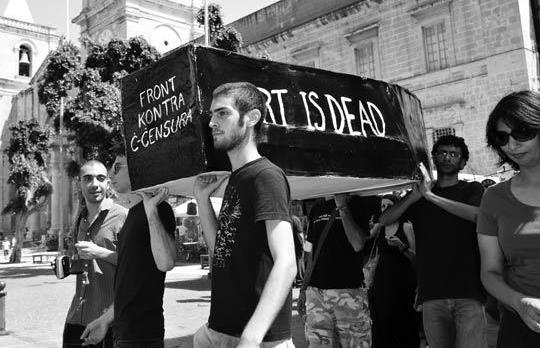 But those people who won a medal and a sinecure under the new administration for “fighting censorship” during the old one, have a moral duty to state that an indefensible 40 million dollar lawsuit in Arizona to protect the reputation of Ali Sadr is at least just as unacceptable a form of censorship.

Those campaigners against censorship of rape-porn accused the University for fronting for the real instigators, as they saw them, of the ban: the government of the time which they saw as confessional, stuffy, old-fashioned and inquisitorial. Maybe they were right.

Can they not see how dangerous this is? That you’re free to circulate rape-porn here but not free to tell Ali Sadr he’s a crook. That you can be bankrupted just for saying so even, as in Ali Sadr’s case, he manifestly is a crook? That truth is irrelevant to the effect of a SLAPP in Arizona. And that that is exactly why the government wants to preserve this?

I cannot turn to our politicians to defend free press in Malta. Some of them argued in Parliament today to use the powers they have to protect journalists from SLAPPs. The majority argued for the continued exposure to threats that silence journalists and media organisations even before they dare speak.

I have to turn to people of theatre, artists, intellectuals and academics: people who write or draw or play and live by expressing themselves. Is your silence truly borne of indifference? Or are you so afraid?