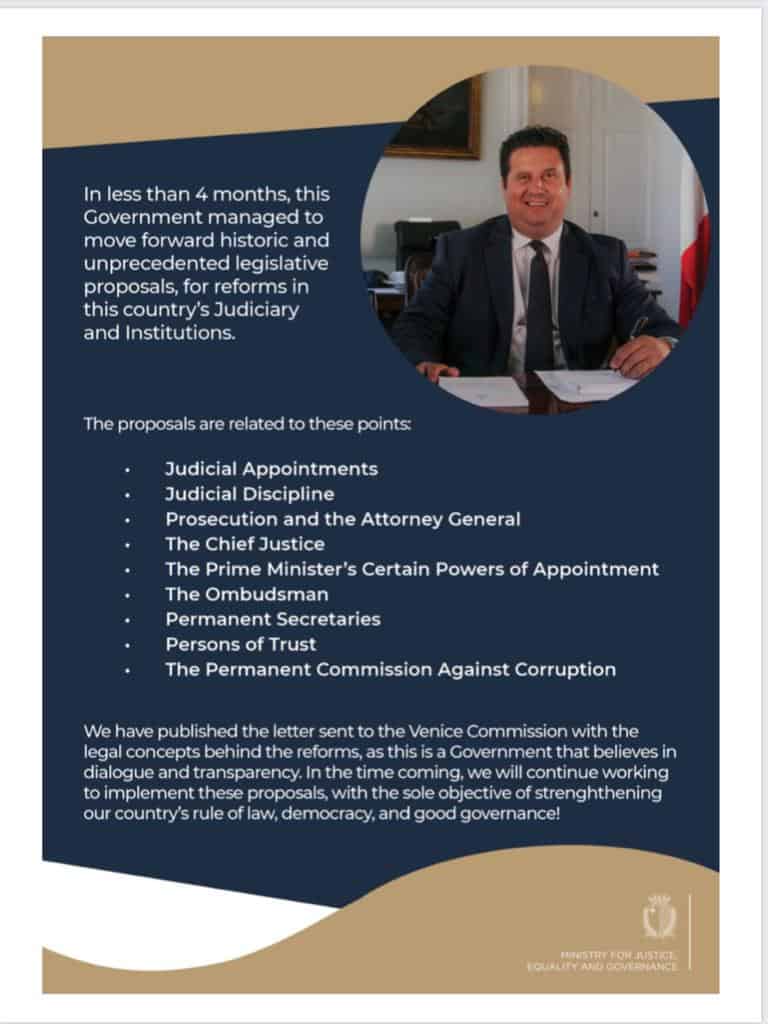 I don’t know what Edward Zammit Lewis’s PR office is drinking but taking out paid adverts in the newspaper to congratulate one-self is hardly a recommendation of his work.

In an advert Edward Zammit Lewis ticks off a series of headlines saying that “in less than 4 months this Government managed to move forward historic and unprecedented legislative proposals for reforms in this country’s Judiciary and Institutions”.

Hold on just a minute. Just about every element of that statement is misleading. “This Government” has been in business for 7 years, not 4 months. They promised a “Second Republic” whatever that might have meant to them, before they came to power in 2013. They set up and proceeded to ignore all sorts of committees giving them all sorts of recommendations.

Even if one were to take into account the time since the Venice Commission expressly demanded these reforms, the government has had this shopping list on its fridge since December 2018. Not 4 months. If Edward Zammit Lewis wants to tell us Owen Bonnici, his predecessor as justice minister, who is now his cabinet colleague as education minister, is a waste of time and space he should try telling us something we don’t know.

The government has definitively not “move forward legislative proposals”. What has been published is a poorly-written, double-spaced to make it look long recalling Edward Zammit Lewis’s days of handing in assignments during his college days, letter to Father Christmas. Legislative proposals are made of draft laws. To anyone’s knowledge none exist. If he Edward Zammit Lewis were Mozart he could tell a nervous impresario that the opera is inside his head, but Edward Zammit Lewis is not Mozart. So please, before you run the adverts congratulating yourself on the work, do the work.

It remains to be seen whether the legislative proposals, once they are actually written, prove “historical”. One would hope they’re “unprecedented” because if they’ve been done before they would not be changes now, would they? So, we’ll put that down to hyperbole. If Edward Zammit Lewis is going to admire his own photo in the newspaper, he can’t be blamed for getting excited.

The key claim is that whatever it is that Edward Zammit Lewis has produced amounts to “proposals for reform” in anything.

In his advert Edward Zammit Lewis says “this is a Government that believes in dialogue and transparency”. But in an accompanying advertorial on The Sunday Times he writes “Some critics may say they have not been adequately consulted. But that would be to ignore the reality that we have listened intently to a wide range of respected individuals and bodies who offered feedback and addressed their concerns in a very short period of time.”

So that’s what we have here. It is not about how efficient the government is being by doing 7 years’ worth of work they neglected and cramming it into 4 months. It’s about changing the constitution and making it look like they’ve been improving things without having the time to speak to their critics.

Edward Zammit Lewis seems intent to make a lot of noise about not doing anything at all. After all, why would he want to make laws that could have stopped his buddy Joseph Muscat in his tracks when he was prime minister and used that power to hijack the country and make it his personal fief?

The final question is who is Edward Zammit Lewis seeking to impress with these adverts? He’s still waiting for an answer from the Venice Commission on how his proposals fit in what laws Europe expects a democracy to have.

To stretch the metaphor of a younger justice minister handing in his constitutional law assignment in the first year of his course, Edward Zammit Lewis has graded himself before handing in his paper. He’s already gone drinking with his PR team.