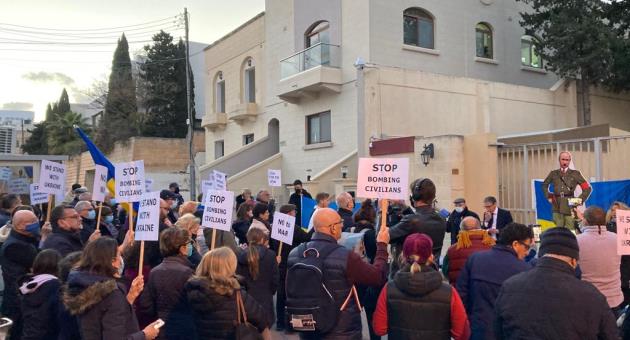 Members of the Ukrainian community living in Malta have told this website they have received warnings from Maltese government officials to stay away from protests for peace called by NGO Repubblika.

Community leaders have received warnings that should they be seen at protests called by Repubblika outside the Russian Embassy in Kappara, or elsewhere, they will be denied “administrative assistance” by the Maltese government. Protesters have noticed police officers using mobile phone cameras to take photos of Ukrainians attending the protests outside the Russian embassy.

Members of the Ukrainian community have been told by their leaders on their Facebook groups to remember that whatever they are promised at protest rallies, “only the current government of the Republic of Malta and officials can actually provide us with administrative assistance.”

In a text automatically translated from Ukrainian to English by Facebook, community leaders told Ukrainians who were seen protesting for peace in their country to “act united and in the same direction, because everyone remembers the swan, the cancer and the pike.”

The latter phrase appears to be a reference to Ivan Krylov’s Russian satirical fable of “The Swan, the Pike, and the Crawfish” where all three animals pull a cart in a different direction and get nowhere.

The fable has been historically applied to various situations where strategic incoherence has led to political or military failure, such as the campaign against Napoleon in the coalition of 1814, the alliance between France, Britain, and Turkey at the start of the Crimean War in 1854, and the failed agricultural policy of 1906.

The literary reference is a message that is immediately understandable to people who grew up with Soviet education. Being seen at protests called by Repubblika would result in the Maltese government punishing Ukrainians by, for example, preventing the unification of families of Ukrainians living here with their relatives escaping the war in Ukraine.

Ukrainians living in Malta have been warned that expressing their political opinions in a way that might displease the government would be punished by the authorities.

Some members of the Ukrainian community who asked to remain anonymous for obvious reasons, expressed dismay at the irony that while their country suffers the aggression of Vladimir Putin who seems intent to return to the oppressive days of the USSR, the Maltese government is threatening Ukrainians with painful consequences should they dare call for peace in their country in the company of Maltese people blacklisted by the Maltese authorities.