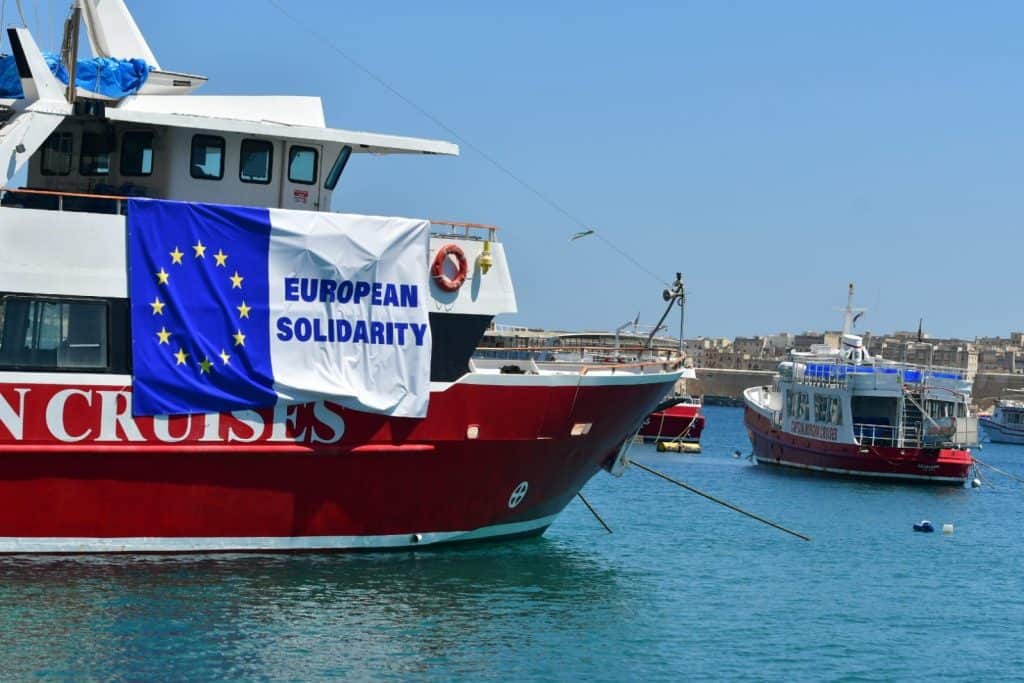 Last night a Captain Morgan tourist boat was equipped with mattresses that can be carried by one person four at a time and sent out to meet the now notorious Mae Yemenja, the Maltese-owned Libyan-flagged fishing trawler that was the scene of the crime for an illegal push-back to Libya of some 50 migrants and the corpses of 5 of their late co-passengers.

The government explained the Captain Morgan cruise boat will be used as a holding pen for the migrants kept beyond the horizon indefinitely. The water-bound detention has not been defined as quarantine. Quarantine rules apply to everyone in a time of pandemic and would have applied to these migrants as well had they been brought into harbour. Italy has used the off-shore method with a boat provided for a holding of 14 days.

But our own government has made no promises about what happens in 14 days. On the contrary, government “spokespersons” said our government are resolute not to allow anyone in through the harbour while the pandemic is on (which could be months). They did say however that “the EU” may choose to take them at any time.

This time, however, they will not be on an NGO boat converted for salvage on the high seas. They will be staying on a coastal cruise ship that spends its time hugged to the coast and that needs under normal circumstances would need a special permit in exchange of a promise not to carry passengers if it as much as goes to Sicily for repairs.

Someone with a sick sense of humour hung the European flag and the slogan ‘European solidarity’ to the side of the boat. That sort of cynicism reminds me of the sprucing up of the Theresienstadt concentration camp for the benefit of the Danish Red Cross inspectors. A sick joke at the expense of people’s dignity. Arbeit macht frei indeed.

The government does not appear to have thought this ‘diplomatic tactic’ through. When we take migrants in and insist EU countries share the burden, we have the moral imperative on our side. Sure, Hungary and Poland and the Czech Republic are brutishly stubborn. But most other EU countries understand generally that Malta is too small to retain all the people it rescues in its waters. There used to be sympathy with our plight.

That can be shown by the consistent flights of migrants out of Greece to other EU member states even in the midst of the Covid-19 crisis and airports being closed. Germany evacuated minors from Greece on 18 April. That’s when the UNHCR were counting the dead we abandoned in our waters. Finland announced yesterday it is taking migrant children from Greece. That’s while we were sending out a Captain Morgan boat to serve as a holding pen on the high seas.

Doesn’t feel like we’re winning the moral game, does it?

Sympathy starts running dry when we start behaving like Joseph Muscat, refusing to allow rescued people on shore until EU countries agree to take them on. That’s especially the case when Malta is the country that sells European passports to crooks from Russia and China without ever complaining about over-crowding.

And it’s especially true now when Robert Abela’s official excuse for not bringing the migrants in is Covid-19 and that therefore “the EU” (which means other European countries) should be taking in the migrants now bobbing in our water.  Ehem. Other European countries too are dealing with Covid-19. Don’t make it sound like you’re the only one facing this. If you expect solidarity, show solidarity. If you’re going to be a mean bastard, that is precisely the treatment you can expect to get.

This ‘solution’ of the off-shore boat raises many questions. But it does provide some very important answers. More on that in the next post.