Waking up from the dream of a Common European Home 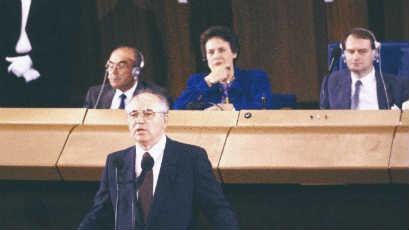 Russia has quit the Council of Europe. Against the background of the invasion of Ukraine this might feel like a formalistic diplomatic escalation. It is more than that. The move has deep symbolic significance and none of it is good.

Add to that the fact that in addition to abandoning the Council of Europe, Russia has cancelled its commitment to the European Convention on Human Rights. Millions of Russian citizens have lost recourse to Strasbourg if and, as is ever more likely, when their rights are breached. This is a major regression of fundamental rights that underlines and consolidates all the new abuses adopted by Putin’s dictatorship.

The ‘Common European Home’ concept was a phrase coined for Soviet foreign policy in the dying days of the USSR as Moscow lost control of the countries that used to be its satellite states in Eastern Europe. The policy’s major exponent was the last president of the USSR, Michael Gorbachev, who added to a phrase of Charles de Gaulle when calling for a “Common Home for Europe, from the Atlantic to the Urals”.

Assessed cynically, Gorbachev’s pitch, articulated in Prague in 1987, in Bonn in 1989, and in Strasbourg at the Council of Europe in July 1989, might have sounded like a ploy to compensate for Soviet’s rapidly disintegrating influence on Berlin, Warsaw, Prague, and Budapest, with increased influence on Paris, London, Rome, and Madrid.

But 1989 was not a year for cynicism. There had been plenty of that in a century of exhausting suspicion, conflict, and life on the brink of extinction-level danger. In Prague in 1987 Gorbachev said the USSR was “resolutely against the division of the continent into military blocs facing each other, against the accumulation of military arsenals in Europe, against everything that is the source of the threat of war. In the spirit of the new thinking, we introduced the idea of the ‘all-European house’.”

This was exciting stuff. Ultimately the Council of Europe became the grand hall of the Common European House where the differences between European countries (inside or outside the EU, inside or outside NATO, neutral or aligned, former Soviet or former neutral) would be bridged by consensus on a basic code of respect to fundamental human rights and the rule of law that would be universal and universally applicable.

No one thought it would be easy. But in the years since Russia, the principal successor state of the USSR, signed up to the European Convention on Human Rights, that country coexisted uneasily with a reality where decisions of its courts, even its highest court, could be overruled by a court outside its territory.

Seeing Russia’s regime behave now like a 19th century tsar or a Soviet tyrant from the 1950s and 1960s, it is not astonishing to imagine how uncomfortable Russia must have been with a Strasbourg court overruling decisions of judges they appointed and at least in part, controlled working within Russia itself.

And yet, there were some remarkable decisions that drew a red line under the violations of human rights by the Russian authorities.

Russia was found in breach of the right to life when it failed to compensate victims. Violations were also found when Russia detained a 12-year-old boy with mental illness for 30 days. Russia was censored for keeping remand prisoners in metal cages during hearings, for detaining people for long stretches at the airport while it evaluated their asylum applications, for detaining Alexander Navalny for the crime of opposing Putin, and for denying people legal assistance in criminal cases.

Russian citizens successfully appealed to Strasbourg when Russian authorities illegally listened in on their phones or when they prevented a person serving a life sentence from seeing his family for 10 years.

The European Court of Human Rights found Russia discriminated against male soldiers for not allowing them to have time off with their children and Russia was censored for punishing someone twice for the same crime.

The European Court also ruled against Russia in a case brought by another former Soviet country in the Council of Europe, Georgia, when Russia arrested, detained, and expelled Georgians from Russia in 2006.

There was the famous case brought by the wife of Aleksandr Litvinenko who defected to the UK from the Russia security service and was killed with polonium poisoning. Apart from the Navalny case, there were cases brought against Russia by Putin’s hunted enemies like Khodorkovsky. There were other high profile human rights cases like the case of the killing of activist Natalia Estemirova or cases about Russia’s human rights violations during the wars in Chechnya and Dagestan. There were dozens of cases about Russia’s abuse of freedom of expression and freedom of association.

The list is not endless, but it is very long. And very important.

Especially now because there will be no more such cases.

Russian Prosecutors have just asked for Alexey Navalny to spend the next 13 years in prison over trumped-up charges while, apparently, the judge was taking instructions from the Kremlin. Navalny is already serving time in a penal colony east of Moscow.

Freedom of speech has been effectively eliminated after its long-drawn-out persecution as journalists were killed or imprisoned for years. Now they face 15 years in prison if they dare call a war by that name.

Russia has invaded another Council of Europe member state, violated egregiously is sovereignty, fired on civilians and civilian targets including hospitals, and restricted movement for refugees.

The list of violations is not endless, but it is very long.

Russia’s withdrawal from the Council of Europe ends the dreams of 1987 and 1989 of a Common European Home where we would agree to share the very basics, the very fundamental limits to the actions of tyrants against people. There’s no certainty on what the outcome of the present conflict will be, but it’s unlikely for the destiny of Europe to stop swinging rapidly away from a hoped-for future of peace, disarmament, and stability from the Atlantic to the Urals.

Previous:WATCH: John Sweeney from Kyiv this morning
Next:Robert Abela should get Rosianne Cutajar to reimburse us the €28,000