On the expiry date of politicians 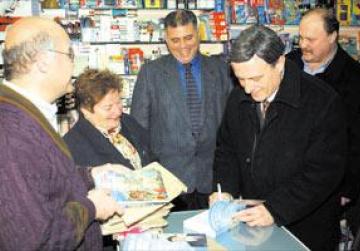 As a politician I expired before I was born so this is not a self-serving argument. The way people speak about people in their 40s and 50s who have been in politics for a decade as if they were senile vegetables grazing beyond the age of utility would not be acceptable in any other profession.

Would you tell your children’s school to fire their teacher because they’re 45 and they’ve already been a teacher for 20 years? Would you stop trusting a lawyer once they’ve been practicing for more than 10 years? Do you insist that the open-heart surgery you’re going under for is conducted only by someone who hasn’t been out of medical school for 2 years? Do you abandon your favourite supermarket just because the cashier is not a new face every time you go there?

It is incredible how malicious narratives take hold and people scream in collective hysteria like a mob looking for an aristocratic head to chop off.

And the inconsistency is outrageous. These people accept as a given that Karol Aquilina is ‘expired’, when he’s in his early 40s, hasn’t served a day in government, has served one term of Parliament on the Opposition bench, was never found, or suspected of wrongdoing and if his accusers’ narrative is to be taken as a given is, at most, guilty of opposing more than other members of the opposition.

If his voters no longer want him and they prefer someone different, that’s fine. It’s entirely up to them whatever their capricious or eminently understandable reasons might be. But this campaign to get people Labour doesn’t like to quit because they’re ‘expired’ is offensive, wasteful, and quite stupid. Incidentally, Karol Aquilina lost votes to candidates on his district that are older than he is.

And whoever said that only clean-shaven post-pubescents are eligible to run for politics? Why don’t we let voters decide that?

There are many reasons why Anton Refalo should not be a government minister. His age is the last of those reasons. People do not stop being wise administrators and capable governors because they’ve blown out sixty candles on their cake. And people who prove incompetent when they’re 55 are not likely to be geniuses when they’re 25.

So don’t fall for the wave of pressure on people to quit politics because they’ve ‘expired’ when their age is far from the reason for that pressure. The reason for Labour’s campaign happily carried by their useful idiots who proclaim themselves PN supporters is life would be easier for the crooks, including Anton Refalo, if someone like Karol Aquilina quits politics.

The problem here is the opposite of expiration. Grow up, why don’t you?