By Andrew Borg-Cardona (I M Beck as was):

Of late, I have been tending to ignore Martin Scicluna, octogenarian columnist with the Times. His pieces spew forth an opinion that is so self-serving that annoyance sets in quickly, which is not conducive to my well-being. 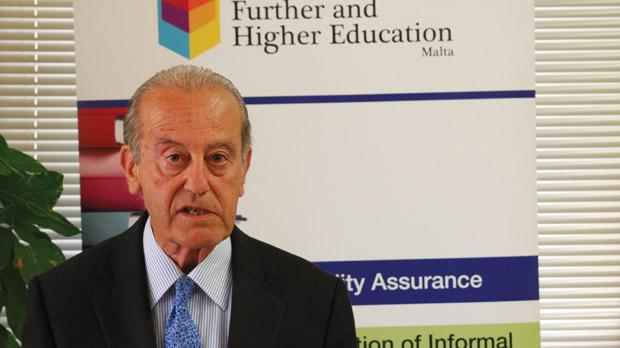 The man has a right to his opinion and to express it and I have a right to do the same about it, and so I will.

A bit of background: Scicluna, one hears, was a relatively senior civil servant in the UK before he came back here and served in Fenech Adami’s OPM. He was also, for some time, involved in a think-tank, the Today Social Policy Institute, the demise of which was lamented, and analysed, in a Times editorial not long ago. It could have been written by Scicluna himself, perhaps in self-compensation for the way the Institute had decided that he was not representative of their views.

Precisely what he did for Malta over the years and how well he did is not germane to this piece. Before the 2013 elections, inexplicably to some, he developed an antipathy to all things PN and did his level best to get Joseph Muscat elected.

Ironically, in his piece on Wednesday 2nd May, which provoked me into writing this even while on vacation, he attributes guilt to Daphne Caruana Galizia for “last June’s devastating defeat” for the PN. To find someone guilty of inflicting Joseph Muscat and his manner of governance (!) on the country, perhaps Scicluna would do well to have a quick glance in the mirror.

This “thinker” – what else does one call a bloke who put himself at the forefront of a think-tank, after all? – came up with series of dicta that deserve highlighting.

He tells us, for instance, that the “assassination of investigative journalist Daphne Caruana Galizia has been used by a small unrepresentative body of activists to generate international concern about the rule of law in Malta”.

At least, he doesn’t wallow in the muck and slime of others by describing her as – well, you know what they call her – but he instantly dis-redeems himself by saying that “Joseph Muscat continues to ride high in the opinion polls”.

Our thinker, then, thinks that popularity with the masses is sufficient to cleanse all manner of sins, a frame of mind that was in evidence in the lead-up to the May 1st Labour Beanfest, at which I doubt he was present. It is a frame of mind that has long been evident in history, for that matter.

Read my lips, Scicluna: even if only one person, as un- or representative as he or she may be, says that something that is wrong is wrong, it is wrong and no amount of prancing fools will change that stark fact, even if great ‘thinkers’ think they do.

Scicluna goes on to betray his own elitist mind-set when he pontificates about the “poisonous mix of Siculo and Semitic blood coursing through Maltese veins”. This is a few paragraphs before pretending to have disagreed with Caruana Galizia’s “politics and utter snobbery”.

In the paragraph after that, he refers again to the “vast majority in Malta”, just to prove that he is – actually – not capable of looking past the rhetoric of crowds.

You have to love this next line, though: “they [he describes it as a pseudo-political grouping] feel entitled by birth and social stature to ensure that the Nationalists are led by “one of us”.

This is twaddle of the first water. With the greatest of respect and love, Eddie Fenech Adami, Lawrence Gonzi and Simon Busuttil were hardly “one of us”, in the sense Scicluna means it.

The ‘us and them’ mentality he so passionately decries in Daphne Caruana Galizia’s writing, failing to see, of course, that it was a matter of style in her case while being clearly a matter of fundamental belief in his, is – and never was – a component of Maltese society.

Unless you’re Martin “Look at me I was a UK Mandarin” Scicluna, that is.

He attributes the interest – and concern – of the international press to their being led by the nose by David Casa and the motley crew, who are also “ensuring that the day when Malta gets a Nationalist Government is postponed for another decade”.

I mean, seriously? The international press is being led by the nose? By David Casa and a bunch of unrepresentative (his word) disgruntled Nationalists?

Oh well, I suppose it’s better than Joseph Muscat’s line, which goes “it’s the PN what’s doing it”, the same PN that is unable to organise a piss-up in a brewery currently.

Scicluna betrays thinking that is so rigid and off-the-mark that he seriously should put his quill and parchment away.
He accuses “this unrepresentative pseudo-political group” of seeking to bring down the Government, telling them (in a small way, I’m allowed to use the word ‘us’ really) that we are “playing with democratic fire”. (Oh, wow, “there will be consequences”).

I only speak for myself, neither for the “unrepresentatives”, nor for the thousands of prancing pitch-fork porting peasants that so impress you. I don’t give a flying fornication who is in Government, as long as they’re clean.

This is something that Joseph Muscat and – for that matter – Adrian Delia and his acolytes – and you don’t seem able to grasp.

We simply want our country back and no amount of apologia from you and people like you is going to stop us trying to get it back, futile as the effort may be in the face of people impressed by crowds as you are.

Previous:Two leaders, and an elephant ignored
Next:GUEST POST: Nostalgia of a Maltese migrant