In June of last year Repubblika published a document calling for the enforcement of our laws to prevent corruption in general elections. Repubblika also proposed improvements to the law since parts of it were last revised before Mussolini declared war on Britain and France. Of course, our call for stricter laws was ignored by the politicians who would have to obey them. No surprises there. Let’s stick to the laws that do exist.

It is illegal for election candidates to give free food and drink to voters in a campaign. By illegal, I mean it is a criminal offence, punishable with a fine and with the vacation of the Parliamentary seat should the candidate win it.

In June 2021 we tried a test case. We had pictures of Rosianne Cutajar (posted by herself) handing out food to elderly residents of her constituency. We asked the police to investigate. The police answered saying no crime had been committed. A close look at the law tells us why that may be the case. It is illegal for a candidate to give food and drink to their voters. The operative word is candidate. One is only a candidate when Parliament is dissolved and a person has registered with the Electoral Commission their desire to be on the ballot sheet of the coming election.

So Rosianne Cutajar in June 2021 was an MP but no longer and not yet a candidate. And there’s no law against MPs giving out free food (though there should be, in a country where we’re in constant electioneering).

OK, she’s a candidate now. And here’s a campaign flyer she circulated with her potential voters offering them free food. Not a little free food. A lot of free food. 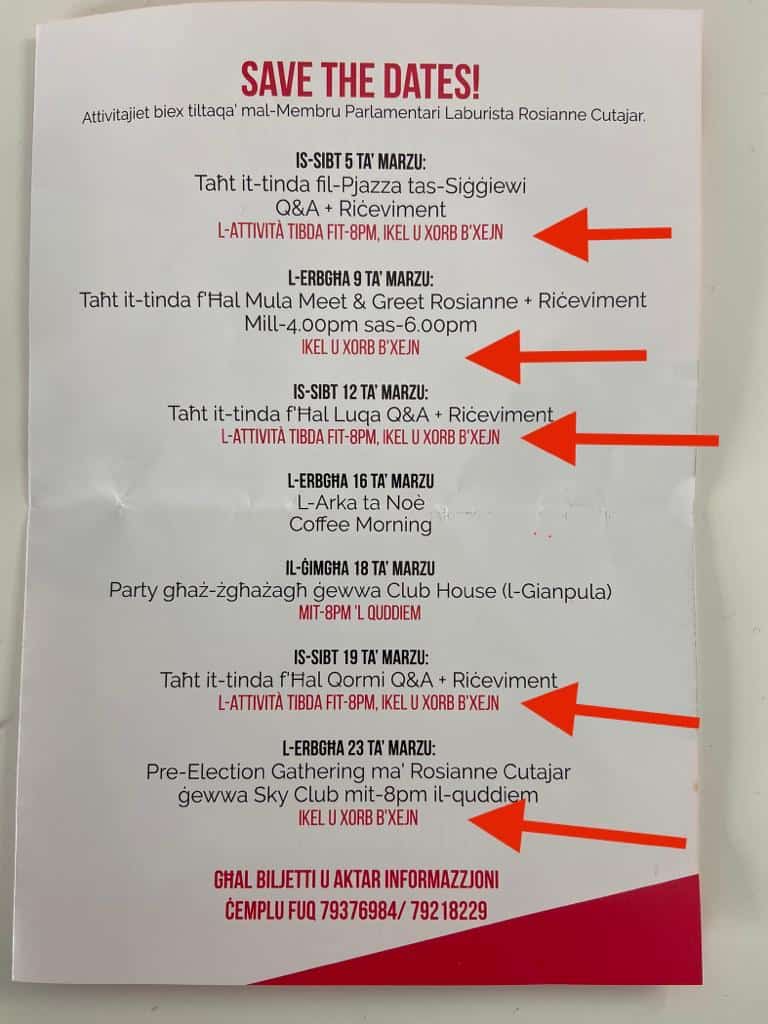 Don’t for a minute think she’s the only one doing this. But that’s no excuse. If she has evidence of other candidates offering free food her duty is to report them to the police. “Everybody does it,” is no justification. Everybody must stop doing it.

Rosianne Cutajar has been there. So, she’s a good place to start. I should imagine someone in the Police Department and the Electoral Commission is reading this.