Apologies for the mansplanation

I hesitated to write my reaction to Julia Farrugia’s piece in The Times yesterday. The mental picture of a loud, burly man telling a woman why she’s wrong about her interpretation of the causes of misogyny in our society or why women in politics are at a disadvantage compared with men is horrible.

No man is qualified to explain to women why the odds are stacked against them. And no man is needed to do so.

Julia Farrugia deserved all the sympathy she got when she was slapped with a sexist slur. My personal suspicion is that the unnamed offender had another MP in mind when he wrote that and apart from being hurtful, offensive, misogynistic and unacceptable, the insult is also a consequence of mistaken identity.

I say that not because now that Julia Farrugia has used this opportunity to indulge her own hurtful, offensive and unacceptable prejudices, there are reasons to find any mitigating circumstances for the insult thrown at her.

I say that because criticism in public life is not always undeserved and Julia Farrugia has again earned some with her piece.

Her attack on Daphne Caruana Galizia is revolting. I disagree with those who say we should not speak badly of the dead if there are bad things to say about them. I will not speak about what a doting pet owner and an exemplary vegetarian Adolf Hitler was. And if Julia Farrugia has reasons to disagree with Daphne Caruana Galizia let her pronounce them.

But to accuse Daphne Caruana Galizia of being herself the cause of misogyny in our society and the reason why women find it harder to be in politics is outrageously ludicrous.

You see, Julia Farrugia’s concern is not for women. Her concern is for – her words – “Labour women” that somehow have the monopoly on gender prejudice and political usefulness. She then lists all of three examples – three – of women in Labour politics written about by Daphne Caruana Galizia in three articles extracted from a thirty year career of a hundred thousand pieces as evidence that Daphne Caruana Galizia led the charge of red woman bashing.

Julia Farrugia’s case rests on the evidence that Daphne Caruana Galizia once called Agatha Barbara a butch dyke (has anyone ever not done so?), criticised Marie Louise Coleiro Preca’s fashion choices in the early months of her Presidency (which turned out to be a public service as clearly the President took account of the criticism and silently sought for change) and of course wrote about Julia Portelli and her father in an article that was deemed libellous in a court of law.

Now quite apart from the fact that losing a libel suit is failure to prove the truthfulness of what one has written which is not the same thing as anyone having proven what was written was a falsehood, the important argument here is that not one of the three examples cited by Julia Farrugia are in any shape or form harmful to the cause of women in a general sense.

I will not write about a President’s bad taste in clothes not because it is beneath my dignity to do so but because I’m incompetent in the matter. I myself am universally known for my bad taste in clothes. But if I knew something about the subject and I used that knowledge to criticise the head of state for wearing clothes that make people giggle behind her back, I refuse to accept that I would thereby be perpetuating women’s disadvantage in our society.

Julia Farrugia should have had the decency to give context to the ‘butch dyke’ quote. Instead she throws it in her article for the reading pleasure of people who never read what Daphne Caruana Galizia wrote but are on a constant look-out to find reasons to disapprove of her.

Daphne Caruana Galizia needs no defending and would definitely disapprove of anyone, especially a man, speaking about how she promoted the cause of women in our society. She never specifically set out to do so.

But she did do one thing. Still in her teens, a scrawny, shy woman, she stood up to a bully in a police inspector’s uniform and did not flinch even as he shoved her overnight in a cell full of human shit: male human shit.

Without appealing to anyone’s sympathy or pity, which she never got anyway, she faced thirty years of being called a witch, a bitch, and far worse than that whimpering sod at the Partit Demokratiku could ever think of. Yet she marched headlong doing what she thought was right.

She faced the prospect of having her own sons mocked, attacked, intimidated, their dog killed, their front door set alight. She never once used her gender as a shield. She never once dragged all womenfolk for her own protection.

She stood alone relying on no solidarity among women; relying only on her own strength and faced down men of authority across the political divide.

In doing that she silenced men by showing that no one gains the status they deserve in society by asking for it from those that have taken it away in the first place, but by standing up and grasping it.

In showing that her gender mattered only to the prejudiced men of our society but never to herself in her choice of what to do or what to say she burst through the glass ceiling barely flinching.

And Julia Farrugia and so many others resented her for showing the way, and resent her even now though she died doing so. 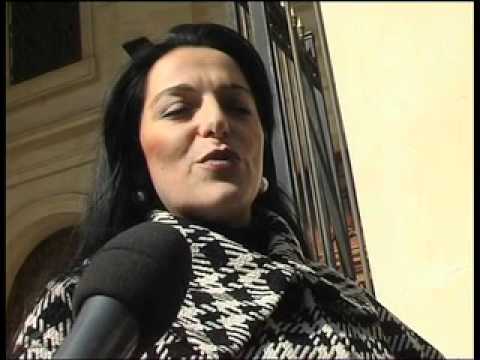