The following is a European People’s Party Statement: 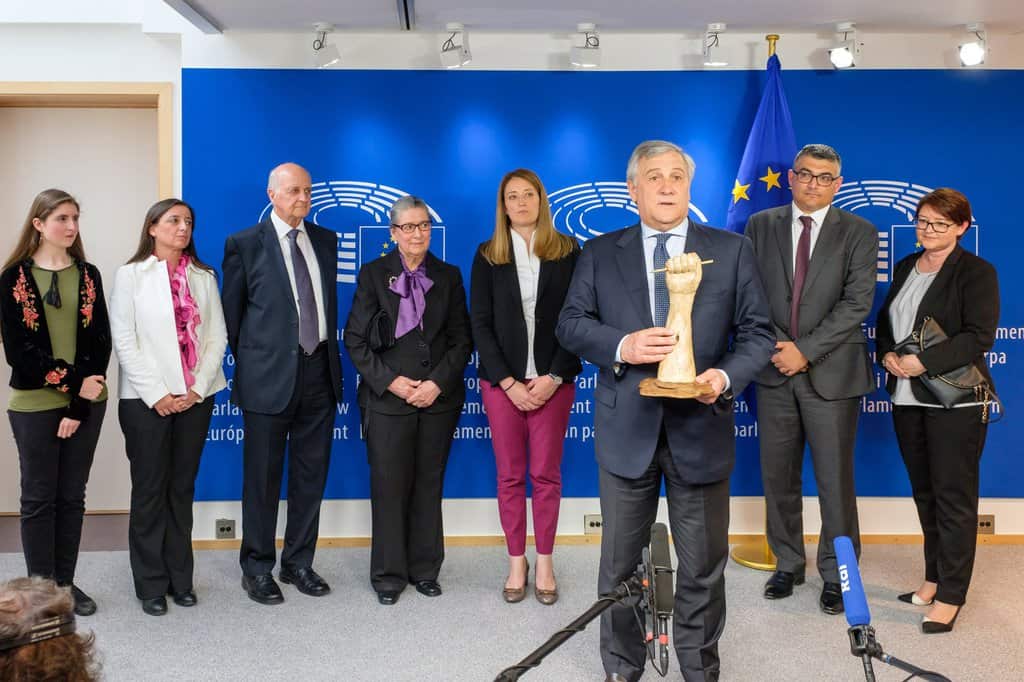 In an emotional meeting with Daphne Caruana Galizia’s parents, European Parliament President Antonio Tajani and MEP Roberta Metsola reiterated that they would not stop fighting for justice and for the truth about the assassination.

European Parliament President Antonio Tajani said: “”It is an honour for me to receive this artwork representing the struggle for truth by Daphne Caruana Galizia on International Press Freedom Day.  Her struggle is our struggle. An attack on a journalist is an attack against our fundamental freedoms. We will not stop until justice is done with Daphne, with her family and with her work. I have said it when I was in Malta to pay respect to Daphne Caruana Galizia at the funeral: we want to know who is the mastermind behind this barbaric murder.

The Parliament is also acting on the need to protect journalists with concrete measures. Last week we requested the European Commission to present legislative proposals against intimidatory SLAPP law suits and to propose initiatives to promote quality journalism in the Member States. In honour of Daphne, we will insist that these requests are followed up with actions.” said President Tajani.

“I looked into her parents’ eyes and promised them again that their battle for truth and justice for their daughter is our battle too. It will not be swept under the carpet. Daphne Caruana Galizia was assassinated for seeking the truth and nothing will stop us from demanding justice. Her assassins and those who ordered them not only deprived Malta of a journalist, they took the life of a daughter, mother, sister, wife and friend, but even in death they could not silence her – other journalists took up her baton and formed the Daphne Project”, said Roberta Metsola.

“Daphne Caruana Galizia personified the European way, she demanded better from her representatives, from the political class and wanted the highest standards for her country. This sculpture will be put on display in the heart of European democracy – it will commemorate her life and her work and serve a constant reminder of the need to protect media freedom and the rule of law in the European Union.” said MEP Metsola.

Maltese artist Kevin Scerri said that his artwork symbolises the courage and determination of journalists all over the world, who do not stop despite adversities in their quest for truth. The wooden sculpture depicts a clenched fist holding a broken pencil over a bay laurel leaf, symbolising Daphne Caruana Galizia’s strength and courage. “The message I have tried to convey to journalists and to those who wish to silence them is that ‘If you break our pencil, we will sharpen all its pieces and come back stronger’. After Daphne Caruana Galizia was assassinated it is now up to all of us to sharpen her broken pencil and continue her quest to uncover the truth”.

Earlier in the day, Daphne Caruana Galizia’s parents and members of her family also met EPP-Group Chairman Manfred Weber and EPP-Group Secretary General Martin Kamp. During the meeting, Chairman Weber said: “Daphne Caruana Galizia was a journalist who revealed serious corruption and abuse of power cases. I am satisfied that the Daphne Project continued with such investigations in their quest for the truth. The EPP Group fully supports Partit Nazzjonalista’s insistence for justice to take place on Daphne Caruana Galizia’s murder and to ensure that those guilty of corruption and abuse of power are brought to justice.”