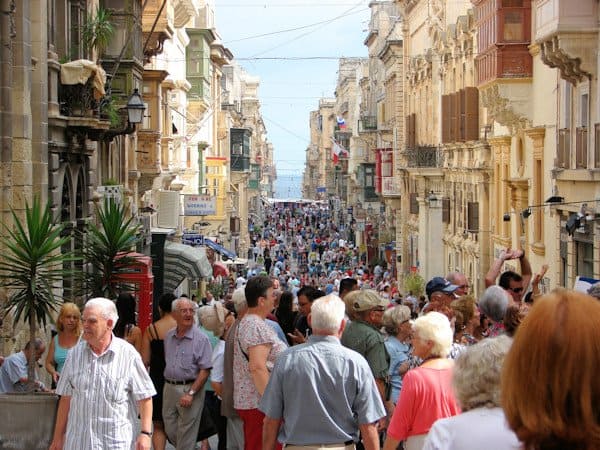 I worked in political positions for PN governments for almost 17 years. Before that I ran twice on the centre-right ticket for the national union of students. I contested the parliamentary elections on the PN ticket in 2013.

So for a long time I’ve done a lot to earn the tribal assumption that I’m PN.

Those who knew me when I first started being politically active knew I was a free thinker. Some of them are in the very highest positions in the PN now. We had just started university together. There was no reason to assume I was PN. I was brought up in a Labour family and had never voted yet. Evarist Bartolo who ran Labour’s media at the time invited me over for an interview to join their crew. It was around the time Joseph Muscat, Glenn Bedingfield and other grandees were starting out.

But that was 1994. If I made choices according to tribe I’d have followed what would have been my Labour destiny. I would also have been a Sunday church-going Catholic but I made my own choices on religion. I was going to make my own choices when it came to politics too.

I certainly was horrified by stories of the violence, abuse, and state-sponsored terror of the MLP days in the 1980s. I was appalled at the viciousness of the regime led by the man for whom a monument is being unveiled in Castille Square.

But that was, as I saw it, history. The present demanded my choice. And I chose PN on the merits of what then was the present.

The PN lost. It hurt but it did not matter. I felt I backed the right side and immediately after the loss that October 1996 I looked to see what I could do to help.

The opportunity to provide a service came with the November 1996 student union elections and during those two years I campaigned for a referendum on EU membership, a political project David Casa led at the time.

When the PN came back to power in 1998 it restarted work on the European Project. I was offered the opportunity to help out, first on Richard Cachia Caruana’s staff and later on Austin Gatt’s. This was a cause I was committed to and I felt I was in the right place.

Mistakes were made along the way and I had my fair share of those too. In 2013 I thought I was prepared enough to offer myself as a candidate for Parliament. Mistakes and all I was (and remain) convinced that Joseph Muscat’s character is exactly the sort that should not be in political office. The electorate thought otherwise and I felt no bitterness neither about their choice to change political parties in office, much less their choice of people they would rather have as their MP than me.

I moved to the private sector and after some hiccups along the way I had pretty much settled down by 2017.

When that election came I was a spectator for the first time since 1996. I felt I had something to say and this time last year I posted a few articles first on Facebook and then on a makeshift blogging space I improvised.

I enjoyed the feedback I got and the tips Daphne Caruana Galizia gave me and I continued writing after work hours a few times a week. For fun. As a personal distraction. Because I enjoyed it.

Then Daphne Caruana Galizia was killed.

Three weeks before she died I wrote a piece about her, mostly addressed to PN supporters who cheered her on in the months, weeks and days leading to the June 2017 election but who in September turned on her because she broke what they must have thought was some code of conduct. They attacked her because she was reporting on and criticising their candidate for the PN leadership and they adopted wholesale the vicious language Labour had used on her for so long and made it their own.

I wrote that “The problem with Daphne Caruana Galizia … is that there is only one of her”.

It was, like all my pieces, an armchair article written from atop my comfortable perch observing the goings on in my country as a spectator does in the stalls at tennis.

I wrote in that piece that it is frustrating that people feel it necessary to assume that everyone must fit comfortably in either of the PN or PL boxes. I also wrote that it is sad that we think that within those boxes a unanimity that is cult-like in its uniformity must prevail.

In the local political context we do not speak of debate, of controversy, of differing views, of discussion, of synthesis, of compromise, of disagreement. Here we speak of treason, of heresy, of witches, of burnings, of eliminating dissenters, of people who are true Nationalists or Labourites or people who are not true whichever of the two.

In 1976, when I was born, Dom Mintoff used a phrase that summed it up perfectly: “Min mhux magħna kontra tagħna”. There is no space in this Venn diagram for anyone existing outside the two mutually untouchable circles. And being in anyway in disagreement with the group one is expected to belong to, places them firmly in the opposite group.

I admired her for 25 years I was not going to flatter myself into thinking that I could become her or somehow replace her. But I, as many others did at the time, at least decided I was not going to let the harrowing silence that bomb left behind echo unchallenged.

I quit my job and focused on writing.

Now how could anyone that knows all that, expect that I would take myself and my family through such an upheaval to become a propagandist or an apologist for one political party against another? It would be the last thing one ought to do that would make any sort of sense.

I still think as I thought 25 years ago that people who step into politics for the right reasons are needed and need all the support and deserve all the admiration we can give them.

But that wasn’t the emptiness that Daphne Caruana Galizia left behind. Political leaders have enough media resources to wallow in their sycophancy and to have stories that may embarrass them expunged from their version of reality.

Political leaders have enough hangers on to push away questions from the international press who came to Malta to understand the significance of Daphne Caruana Galizia and where were they on the eve of her assassination. They can dodge those questions happily without my help.

Political leaders have enough adulating supporters that will back them come what may, that will worship them purely out of respect for the flag they fly and the party they lead or militate in. In other words my fandom will add nothing and take away nothing from their political capital.

Which is why it remains incredible to me now that when my attention turns onto the leader of the PN and, as it almost aways is, my commentary is less than complimentary, people who support the PN and often enjoy reading my far more frequent criticism of the government and of the Labour Party, do not merely express disagreement with me but express dismay at my supposed betrayal.

The general drift usually is that since I am obviously unhappy with Joseph Muscat’s government I am somehow morally obliged to overlook any inadequacies of the PN and its leadership in the service of a united opposition.

Gents, if you want to impose that counter-productive, soul-destroying point of view on anyone keep it within the PN. I am not part of the parliamentary opposition. I am not part of the leadership of the PN. I have been out of that scene since 2013 and though my past helps people who refuse to see the facts to make assumptions about my intentions, my present should really wipe all that away.

My service to this community, or at least the service I have chosen to take up, is not unifying the opposition. I have no mandate to do that. That mandate is in the hands of the leadership of the PN.

My job is to hold power to account, whatever its political shade and however convenient or inconvenient that may be to whoever seems to be reading.

I find this disturbing. Firstly because people already have party-owned media and carefully controlled Facebook eco-chambers where they can happily exist in the assumption that their political party and political leader are perfection incarnate. They really do not need to try to poke self-employed one-man blogging sites to write in a manner that would please them. And what’s so painful about reading something you disagree with anyway? Try it, it’s more fun than you expect.

Secondly and far more importantly because the decades long misunderstanding on what Daphne Caruana Galizia stood for in our community persists unabated in spite of her death. Many still think it is an aberration for someone to have an opinion that is not identical to either one party. They still cannot fathom how anyone can consistently criticise the leadership of one party and have anything but self-mortifying, near-death-exhilaration praise to give to the leadership of the other.

Thirdly because one year into a five year term people already start brow-beating you into what party to vote for, four years from now. Four years is an eternity away. Yes I am aware that there are situations when one must vote unhappily for a lesser of two evils, to decide strategically to vote for a party they disagree with to avoid the election of a party they disagree with more. Yes I do understand that a choice will need to be made, however unhappy it may be at the time.

But hey this is ages from now and much can happen until then. And really this is not about how I intend to vote. As with my adulation, not to mention personal political participation, in the big scheme of things my little lonely vote is just one in hundreds of thousands.

What people already seem to expect is silence from now till whenever a vote is due, a vow of self-restraint, an obedience to a partisan hierarchy that demands it.

Fat chance. Not only should this not be demanded of a journalist whose reason for being one is just the opposite of obedience to authority, but it should frankly neither be demanded of the electorate at large.

Religions demand loyalty right or wrong but they do that because they demand the worship of beings that are more than human: the divine, for those ready to give space to that in their personal universe, are always right even when what they appear to do seems questionable. Doubt comes from sin and as we are told at very sad funerals there’s a great plan we must subscribe to however inexplicable its daily occurrences seem to be.

Politics is not a religion and worship of mere mortals is a dehumanising perversion. Loyalty in teamwork between participants with a shared objective is mechanically useful. A cult following of someone who has just shown up in the political scene with more questions than answers is, quite frankly, mediaeval.

Laburist sal-mewt, Nazzjonalist ta’ veru, aħrax or aħdar as terms of endearment: everyone’s free to label themselves as they please.

If you don’t mind, I’m none of those. The name, if you like, is Manuel Delia.