The Panama Gang’s behaviour in court is truly appalling. Even the Mafia, at least in the romantic depictions of it, distinguishes between soldiers and civilians. The way they are getting their lawyers to harass Peter Caruana Galizia out of some perverse sense of vindictive revenge for the death of his wife would disgust the Mafia dons they admire so much.

What is even more indecent is they are using these horrid courtroom dramas not only to hurt the surviving family of the journalist who exposed their crimes and their lies but also to continue to slander her memory. They exploit people’s lack of appreciation of court processes to suggest someone is hiding something and that must be because Daphne Caruana Galizia lied and deserved to die. Worse even, as I shall show.

When Daphne Caruana Galizia was killed she had a file of 54 open civil libel cases to defend, most of them filed by the Panama Gang. She also had 5 criminal libel cases open at the time of her death.

When you die any criminal cases against you automatically stop. If you’re accused of murder and you die before you’re tried, the matter ends there. You cannot be tried posthumously.

When you die, any civil lawsuits brought against you are inherited by your heirs. So you can leave your children your house when you die, but if your neighbour sued you for the costs of damages caused by a roof leak your children will have to face that lawsuit, defend it or pay up.

Same with libel. The 5 criminal cases dropped. The 54 civil cases were inherited by Daphne Caruana Galizia’s heirs: her husband and her sons. It was not for them to choose whether they could, would, or wanted to continue to respond to these lawsuits. They are respondents in these suits and they’re stuck with them.

Their father, concerned for their safety and wishing for their lives not to stop, withstanding the huge loss of their mother, took on the task of responding to these lawsuits on their behalf so they could stay safe away from the country that killed their mother and seems just as impatient to blow them up as well.

He did this as a dutiful father would. But in the sense that Daphne’s sons have no choice on the matter on whether they should respond to these lawsuits or not, by taking this up for them he does not either.

It does not mean he is enjoying this. Journalism was not his job, it was his wife’s. He paid a high price throughout her life as she went about doing it. He paid a high price when he lost her altogether to it. And he is now having to be trudged up and down to court on an almost weekly basis in order to act as target practice for enamel toothed sharks like Aaron Mifsud Bonnici, that ball of leaked stomach acid Paul Lia and their clients Joseph Muscat, Keith Schembri, Konrad Mizzi and sundry wives, mistresses and hangers on.

They are dragging him to the witness stand to answer questions they would have asked his wife. Or then again maybe they wouldn’t have because she would likely have had the answers. Peter Caruana Galizia does not have the answers not because he is hiding something but because, though it should be obvious to everyone, he is not his wife.

If I am killed now, my wife would not know how I sourced the information for the stories that I have published. She would not be able to answer on my behalf if I am dead, questions that could be useful in my defence in the one libel suit I am defending. Because she has her own job and I have mine.

Basic decency would have required them to withdraw their lawsuits by this point. Looking at this bloody spectacle, it has to be said that Adrian Delia’s unseemly rush to withdraw his five lawsuits within hours of Daphne Caruana Galizia’s death is now looking positively gentlemanly in contrast with the disgusting behaviour of Joseph Muscat and company.

On Press Freedom Day we are warned that in the cache’ of intimidatory tools at the disposal of this government, journalists have to face the prospect of leaving their heirs the obligation to defend lawsuits and pay damages after they die. Nice.

There is no inconsistency between Peter Caruana Galizia’s frustration with what he is being made to go through by these cruel pricks who run our country with and the Caruana Galizia sons challenging Chris Cardona not to withdraw his libel cases.

In Chris Cardona’s case the evidence does not only lie with their mother. It is sealed in an envelope containing data of his location at the time she said he was in a brothel and he said he was in his hotel. Chris Cardona alone in the army of Muscat’s drones froze Daphne Caruana Galizia’s accounts assassinating her financially, a precursor to a more definitive end. Daphne’s response, in her own life, was to seek securing evidence that would be useful in her defence. Chris Cardona has since that moment fought with all his might to avoid having that evidence revealed. 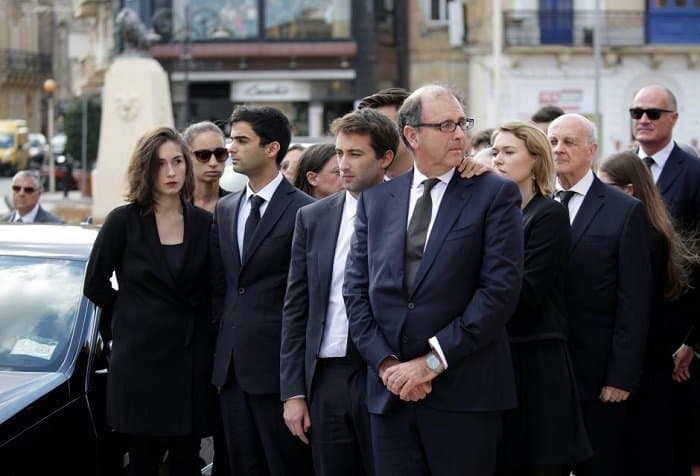 Previous:Let’s meet on the Tritons Square to scare the journalists
Next:If not now