As if they haven’t suffered enough

With the possible exception of a few loons no one feels anything but a depth of anger, sorrow and sympathy after the senseless assault on a traffic cop by a murderous lout. But some also cynically find in that near unanimity an opportunity to use the despicable incident as a pretext for their political advantage.

Many people marched in Valletta this morning because they felt that was the only way they had to express their fullest solidarity with the police officer, his family and colleagues that suffered so much from this attack. Almost everyone shares those emotions.

A few people marched in Valletta this morning to spout fascist notions of ‘need for discipline’ and ‘need for more respect to authority’.

What this country needs more of is not discipline or respect of authority. It needs respect for the law and action against those who break it no matter who they are. It needs objective enforcement that does not allow politically favoured criminals to defy the law and perpetrate their crimes with impunity.

Yes the police must protect each other from random acts of violence. They are on the front line and that fact alone should cause none of them to be hurt or worse. We must all be comforted that the police can protect themselves and each other because after all they are the ones we rely on to protect the rest of us.

That does not mean, as some absurdly have been saying these last several days, that by virtue of wearing a uniform the police deserve obedience. The argument that throwing paper planes at the closed front door of the police headquarters or sundry fruit and vegetables at an unflattering image of the police chief somehow brings about the assault experienced this week is illogical and malicious.

These fascists are arguing that in order to cement an environment of obedience to authority (which is no doubt useful when a policeman is directing traffic), any protest or objection against any police action should not occur.

This is why the prime minister gleefully steps in to remind everyone that there must be unanimity in respect of police authority. The assumption is no one will dare contradict him because no one wants to be seen to somehow approve of the assault on the poor traffic cop this week.

Well I don’t approve of the assault on the poor traffic cop this week. But Labour party commentators have already said I somehow, at least in part, caused it. And that was before I said anything about it.

So here are the quotes they can pick out entirely out of context to show that they were right.

But when Lawrence Cutajar first declares to the camera he has no reason for an inquiry at Pilatus Bank after a journalist reported the bank held evidence Joseph Muscat’s family received bribes from Azerbaijan, he renounced the right to have any authority, let alone respect. Even more so when the next day he swallowed his words and followed the instructions of the alleged perpetrator of a crime to raid the bank after the evidence had been removed and after having said no investigation was necessary.

In the face of this, citizens have a duty to protest. And protest must by definition be disrespectful and defiant. It is not the protesters who bring disrepute to the police. In this case it was the chief of police, and consistently his senior team of government cronies.

Unlike those who seek to explain the utter insolence and barbaric violence perpetrated by the alleged assaulter last week I do not seek to blame his behaviour on people with whom I have a political disagreement. Labour has been telling us the assault happened because we have criticised the police. I will not say that the assault happened because Lawrence Cutajar, Silvio Valletta and Ian Abdilla are Labour party puppets and cronies. I will not say so because I do not think this week’s horrible assault has anything to do with anything outside the cruel intent of the perpetrator.

What I find utterly repulsive is that Joseph Muscat perceives the assault on a police officer as some form of political victory for himself. He marches and he tweets and far from the reasonable solidarity expected of a prime minister when a public official is hurt in the line of duty, he uses the wounds inflicted on the man as weapons against his critics.

The crowd in #Valletta shows beyond doubt that #Malta?? stands in solidarity with @MaltaPolice -JM

This is looking for more than the isolation and embarrassment of people who have criticised the police. This is seeking to enhance and empower the credibility of the bent and corrupt policemen who are covering up for him and his crooked gang. If Lawrence Cutajar refuses to investigate the mountain of evidence against Konrad Mizzi and Keith Schembri, it is politically desirable for Joseph Muscat that no one criticises Lawrence Cutajar.

What better way to silence Lawrence Cutajar’s critics than to intimidate them by using the entire media resources of the state to present them as the cause of massive injury to a baby-saving everyday special hero, the thin blue line between law abiding Muscatistas and the evil ones who think Lawrence Cutajar is a puppet on a string?

The power of fascist rhetoric is the over-simplification and conflation of issues. Why does it have to be a contradiction for a single person to think Lawrence Cutajar is neglecting his duties and to think the policeman who got run over this week by a vicious lout deserves all the sympathy and solidarity that the world can muster?

If we all should respect the law, as today we are so forcefully commanded, why do Konrad Mizzi and Keith Schembri get away with money laundering? Do I blame the hospitalised policeman for their impunity? Of course I don’t. Not now that he’s hurt, nor at any time before when he was doing his job to the best of his ability.

What’s worse in this policeman’s case is he’s also a victim of the fascist instrumentalisation of his wounds and the pain and sorrow of his family. As if they haven’t suffered enough. 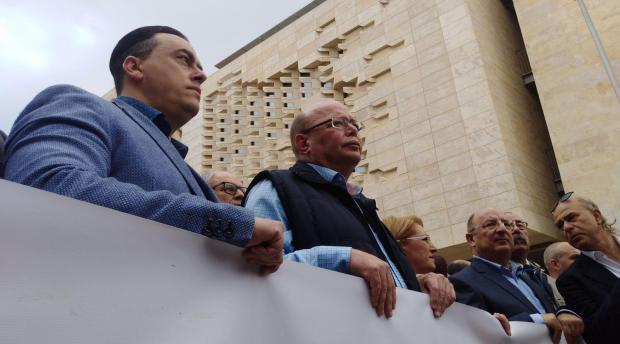 Photo from the timesofmalta.com report.