I doubt very much this will stop the ‘where’s the laptop’ trolling but at least it should frustrate the real motive behind it. Trolls repeat a mantra because mantras are easy to remember. They can be used to shout down any argument and prevent any tempting distraction from the obsessive objective of silencing rationality and logic.

But the senior Labour Party officials, the stagehands in Joseph Muscat’s play, wanted to get further with the laptop conspiracy theory. They wanted to pump the idea that the laptop is being hidden because it contains information that would exculpate the government from the crime. And it would do so because, here is the alternative conspiracy, because the murder plot was hatched by the victim’s own family.

I’m not sure Joseph Muscat thought that would stick. I’m not sure he even hoped it would.

He did hope however to force the Caruana Galizia family to hand-over the laptop out of an instinct of self-preservation in order to dispel the ugly rumours the government was stirring.

Well they played it well, didn’t they? Right royally shafted them if you ask me.

I will not speculate why the Caruana Galizias chose the German police to hand the laptops over to. I do not want to give the impression that I am privy to their thoughts on this. I am not. So I will only draw the conclusions that are absolutely obvious.

The Maltese authorities are not to be trusted with the information contained in Daphne Caruana Galizia’s notes, least of all the politically-controlled police. The reasons are intuitively obvious. I don’t imagine Daphne would have needed to discuss with her family what they should do if something were to happen to her. Their intuition is more than enough.

Two days after Daphne was killed I gave my first four interviews to the international press. There were Liberation, La 7, The Economist and Reuters. They asked me my thoughts about what happened and what would happen. Not that my thinking was too clear at the time. Theirs was though.

They all asked me about how Daphne’s sources must have been feeling at the time particularly with the grubby paws of political police over Daphne’s desk.

Journalists understand this right off the bat. If anyone is going to trust me with information that could put them in danger they would want to know that I would take precautions to preserve their identity even at the cost of my own safety.

That bond of confidence between journalist and source is fundamental. It is a key to democratic life. There is no compromise conceivable.

Joseph Muscat and his cronies don’t understand this because this is a code that is not sealed by profit or personal reward but by shared ethics. The advantage of amorality, that allow the powerful to shed all inhibitions in their pursuit of power, is also a handicap. One bereft of any ethics will not understand actions purely motivated by them.

Now the German authorites told the German press (see Suedeutsche Zeitung here and Tagesschau here) if the Maltese authorities still want they so vehemently insisted upon, let them ask the Germans for it. 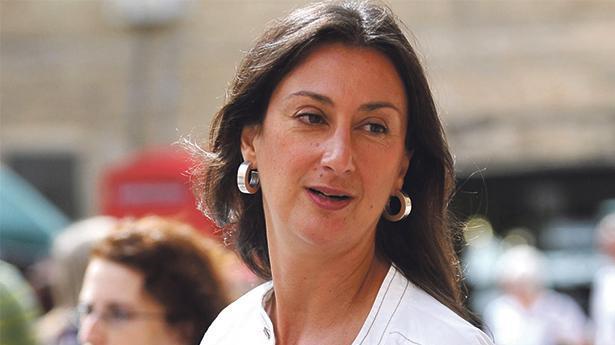 Previous:Euronews and the European Business Society award the Contribution to Society Award in honour of Daphne Caruana Galizia
Next:Pilatus Bank was set up on the back of proceeds from crime – US Attorney