Sent in by Robert who is known to me:

A good friend told me that venting by writing is a good way to appease the anger and resentment I felt after reading Martin Scicluna’s shocking piece in the the Times of Malta this week.

Let me start by confessing that I am one of the thousands who feel there are not enough vigils and awards to do justice to the bravest journalist Malta has ever known. I am, as Martin Scicluna assumes, “[one of] the privileged grouping that has split the Nationalist Party with their intransigent assertions of entitlement and magnified claims of victimhood.”

I admit that I have always voted Nationalist, not because I come from a PN family (my father was as Socialist as they come, on the front line of the defence of workers’ rights and writing regularly in l-orizzont) but because, having lived and worked in a normal democracy and a civilised nation, I know I can choose who I vote for based on a candidate’s and party’s alignment with my own values and aspirations. It is no coincidence that the only party to come close to working for the common good, until recently, has been the PN.

Two events of the last six months are what influenced me in a way I have never been moved before. The horrific assassination of Daphne Caruana Galizia, not only because she was an acquaintance I greatly admired but also because she was seemingly the only bastion of the fourth estate. That coupled with the election of Adrian Delia, who in recent months has shown himself to have a value system more akin to Joseph Muscat’s, means that people like me are not interested in the politics of PN/PL and who of the two wins but are only interested in what is good and right.

We are orphans with no natural home making it very difficult to choose who to vote for in the next election, but vote we must, as is our right and duty.

What people like Martin Scicluna cannot fathom is that there are people out there who believe in what is intrinsically correct and good for our country. We do not have to belong to one party on another. What we demand is honest, decent persons to run our country. Is that too much to ask for?

Martin Scicluna’s shallowness, parroting as he does Joseph Muscat’s PR team, are reflected in the fake due diligence on the fake university that Scicluna granted a licence to; our PM believes is on a par with the University of Malta (with apologies to the University of Malta) and that is clearly a sham. Reminds me of one other fake – Sai Mizzi of “Judge me by what I DOO for YOUU”.

Martin Scicluna sees nothing untoward about a  10 to 18 year fixed price energy contract guaranteed by government; or the €4.3 million to Cafe Premier after they defaulted on their obligations; or Sai Mizzi earning €13,000 per month for sweet FA; or Konrad Mizzi and Keith Schembri opening offshore structures; or a passport scheme that attracts the worst kind of characters subject to a due diligence process of the standard that allowed in the American University of Malta; or the destruction of our environment in the name of ‘progress’; or the annihilation of meritocracy and transparency; or dishing out contracts to ‘tal-qalba’; or the joke that is V18 and its chairman; or the money laundering operation that is Pilatus Bank – also subject to ‘due diligence’. The list is endless.

But here’s the rub, Martin Scicluna. Under a PN government we didn’t have prime ministers who defended the corrupt working for them because the police were truly independent and the prime ministers did not defend criminals. We had true separation of powers and no one had even heard of the term ‘rule of law’ because it was taken for granted. We lived in a normal country. We did not have to protest – nor did the opposition for that matter except when it came to the ‘arloġġ tal-lira’ – that mother of all scandals.

In Martin Scicluna’s delusional mind we are a bunch of rich plutocrats using the Daphne tragedy as a catalyst to put in place a Nationalist government. What he cannot fathom is that we are so disillusioned by the political class and let down by the police and the Attorney General that all we seek is justice for Daphne Caruana Galizia and her family and a return to normality: a country governed by decent leaders. There are so few decent people left in out parliament that our future is not bright. Only a handful stand up to be counted and call out this government for what it is – a front for a criminal cabal.

Only someone delusional could think otherwise. 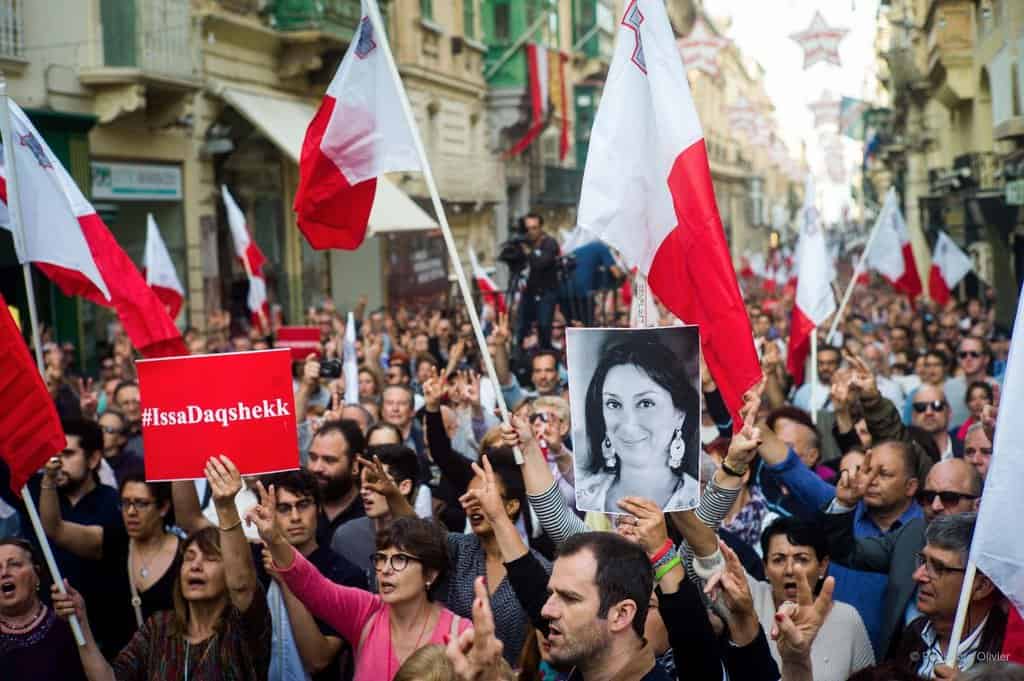