Tell them I called you earlier

No sooner has Keith Schembri produced another poor excuse for a justification for his off-shore accounts that we hear that Maltese investigators already suspected that sort of excuse to be a pre-arranged alibi.

Keith Schembri yesterday said his BVI structure predated by a year or two his appointment to office and therefore reflects his personal concerns and income from his private business activities. The inference is he may have been dodging taxes as a private citizen and that, in this brave new world of upside down morality, is a-ok. He can’t have been laundering money from bribery if he was not in office yet.

Now clearly he was in a position of political influence a year or two before he was made the prime minister’s chief of staff. He didn’t fall on Castille in March 2013 like rain from an unclouded sky. He had been the mastermind of Labour’s return to power and Joseph Muscat’s rise to demigod status. As Anġlu Farrugia put it, he was ensconed in the “raba’ sular” of Labour HQ receiving donors and financiers and sealing Labour’s roadmap.

Only he knows what he was up to in that time.

But above that we now learn that Mossack Fonseca accountants had no qualms about following their clients’ requests to back-date documentation. The news comes from Neil Chinoweth of the Australian Financial Review who reports FIAU investigators in Malta believed Konrad Mizzi instructed his New Zealand accountants, when the Panama Papers were first leaked, to back-date documents connected with the trust he set up there.

So while in public Konrad Mizzi was busy accusing Daphne Caruana Galizia of lying and then the ICIJ of rehashing her stories which, he continues to  insist, he replied to honestly and transparently, he was busy instructing his accounts in New Zealand to cover up the tracks.

The thing with money laundering is that it is a crime that you can relatively easily figure out is happening but is a real bitch to prove. It all relies on documents that are carefully handled and can be manipulated, shredded, or packed in a suitcase and whisked to Baku in the dead of night.

This is why the Panama Gang led by Joseph Muscat is so supremely confident that if it manages to confuse political responsibility with forensic evidence they can get away with it for as long as they need to complete their roadmap.

All they need to do is swim in the doubts they themselves create. They remind me of René Artois of ‘Allo ‘Allo whenever his wife caught him necking one of the cocktail waitresses. “You stupid woman!” 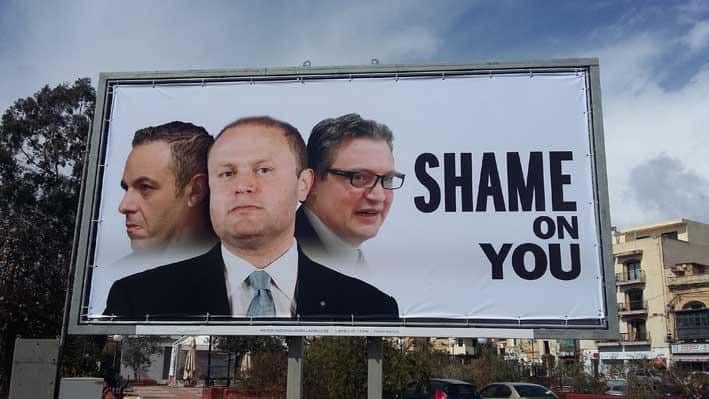